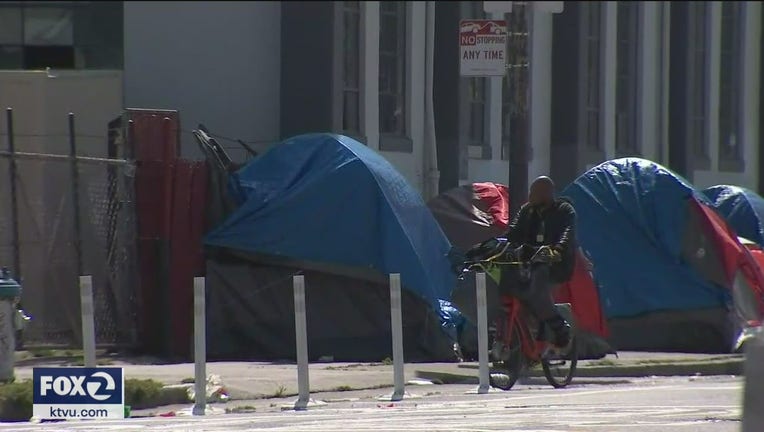 SAN FRANCISCO - San Francisco city officials on Friday announced a temporary, four-block stretch of Jones Street in the city's Tenderloin will increase physical distancing as the district struggles with the COVID-19 pandemic.

The lanes will add an additional 5 to 8 feet of walking space next to the sidewalk and will be implemented in the next few days, San Francisco Municipal Transportation Agency said.

The physical distancing lane will eliminate a parking lane and a traffic lane as it stretches along Jones St. from O'Farrell St. to Golden Gate Avenue.

“We know that it’s been difficult for people to maintain physical distance on sidewalks when going out for essential outings in the Tenderloin, and these changes will make it easier for people to get around their neighborhood safely,” said Mayor London Breed. Breed introduced the project along with District 6 Supervisor Matt Haney.

“The Tenderloin not only deserves but desperately needs streets that are re-designed to meet the needs of the residents, essential workers, businesses, families, and seniors,” said Supervisor Haney.

Signs started going up today in the Tenderloin for a temporary project from @sfmta_muni for residents to have more pedestrian space and physical distance, on four blocks of Jones Street, between O’Farrell St. to Golden Gate Avenue.

Several community organizations have had input and are helping create programs to improve the quality of life in the troubled neighborhood, which had seen an explosion of people living in tents on sidewalks at the onset of the pandemic.

Play Streets, is a program that seeks to close entire city blocks on Saturdays to give children and adults a safe place for outdoor recreation.

Outdoor dining streets is a program that coordinates with restaurants on blocks and creates shared spaces to support small businesses identified by the Tenderloin Merchants' Association.

Last month, the city settled a lawsuit with UC Hastings, Tenderloin Merchants and Property Owners Association among others to clear 70% of the tents in the district by a July 20 deadline.

City supervisors had also called on the mayor to house the homeless population in hotels early on in the COVID-19 crisis.

The mayor said she hopes these new programs help boost the economic and physical health of the community.