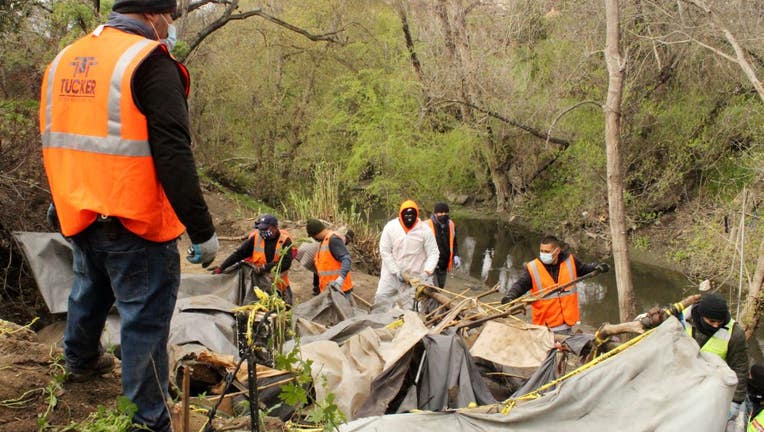 Essentially, the vote to resume pre-pandemic encampment management gives the city the green light to clear or 'sweep' encampments and move recreational vehicles that pose a public safety hazard, are in the public right-of-way, or are located near schools, day care facilities or other child-serving locations.

It also means that the city voted to decline following federal Centers for Disease Control and Prevention guidelines on encampments, which recommend pausing the clearing camps during the pandemic because it could cause individuals to lose touch with service providers or spread the virus.

However, Mayor Sam Liccardo wrote in a recent memo that the city had taken CDC guidelines "far too literally."

"After much pushing, we softened our rigid adherence to the public health guidance to clear public rights of way, but not enough to address many other basic public safety concerns of our residents," Liccardo wrote. "I urge that we do so immediately."

Since October 2020, the city has swept five encampments: two were cleared for Coyote Creek Trail renovations, one was cleared to make room for the Felipe Bridge Housing site and two others cited RVs for being in the public right-of-way, according to a memo by the Assistant Director of Public Works Jon Cicirelli.

The vote passed by the City Council also recommended the city find alternative places for unhoused individuals who are swept before they are removed from their encampment -- something the city has often not done when clearing camps, even during the pandemic.

And as a result, many residents who are forcibly removed from their encampment eventually return, sometimes as soon as a few days after the sweep.

That's why Councilmember Raul Peralez recommended the city explore and establish sanctioned encampments -- public spaces sectioned off to legally allow unhoused folks to live in, where services like case management and health care are provided.

He said he is in favor of resuming encampment sweeps, especially if they pose a threat to public safety, but couldn't support returning to the status quo, "which is just abating, identifying places that are off limits for encampment and just constantly going out and shuffling people around from place to place."

"This is the opportunity to do something different ... and I want to take advantage of that before we simply go back," Peralez said.

The proposal to explore the feasibility, cost and details of sanctioned encampments only had two dissenting votes -- Councilmembers Dev Davis and Maya Esparza -- but it still wasn't heavily supported by the council. Some councilmembers who voted in favor did so very hesitantly.

Liccardo, who voted in favor, said he would much rather invest in finding long-term housing for people and asked staff directed to explore the idea of sanctioned encampments to do a "low-touch effort."

"I know what it costs in San Francisco -- it's more than $60,000 per space for an individual in a sanctioned encampment, which is way too much money to be spending on people sleeping outside," Liccardo said during the meeting. "We should be spending that money getting people housed."

In a memo, Councilmembers David Cohen and Pam Foley echoed that sentiment, despite voting in favor as well.

However, other councilmembers like Matt Mahan were more supportive of sanctioned encampments and said they would be willing to find an area in their district to do so, should the council decide to move in that direction.

"It's exhausting for people when they move around all the time," Cartwright said. "It's a term called relocation stress syndrome where people actually die because of the stress of moving so many times and it happens to our homeless community often."

Cartwright also noted that sweeps were not effective strategies to clear encampments anyways, because many people come back to the same exact spot.

"It's home to them, what do you expect them to do if you don't give them another option," she said. "I guarantee if you offered housing, 99 percent of people would jump at that opportunity, but they aren't given many choices."

Many councilmembers conceded that sweeps were not the best method to deal with homelessness but noted that sometimes it is essential.

This is especially true in areas where encampments are located right next to school campuses, or in RV parks where fires are being set and threatening nearby communities, Esparza said.

During the homelessness discussion, the council also directed city staff to find additional funding to expand interim and transitional housing.

Councilmembers also directed staff to expand into large encampments the SOAR program, a street-based service where mental health clinicians and drug and alcohol abuse counselors offer services to unhoused residents and help connect them to interim or transitional housing.