Owner Juana Ayala doesn’t have much money but she had a dream to start her own business and help her kids especially her youngest son pay for college. She invested in a food truck and that was taken in what appears to be a planned, thought-out theft. Azenith Smith reports

SAN JOSE, Calif. - A San Jose family is desperate to locate a food truck after it was stolen from a gas station parking lot. It’s their only source of income during the pandemic.

Owner Juana Ayala doesn’t have much money but she had a dream to start her own business and help her kids especially her youngest son pay for college. She invested in a food truck and that was taken in what appears to be a planned, thought-out theft.

“My dream is for my kids for them to go to school, a college, a university,” said Ayala.

Ayala wanted a better life for her children tired of cleaning hotels for a living so after years of saving $70,000, in 2015 she bought a food truck, painting it purple in honor of her niece who died young.

She started a business with her husband called “Adelita’s” cooking up carnitas and burritos as well as catering services.

She is now left heartbroken and worried how she’ll pay the bills after someone stole her business on wheels.

The truck is normally parked at the Chevron gas station at the busy intersection of Berryessa and Capitol in San Jose. The owner worked out a deal with the gas station. 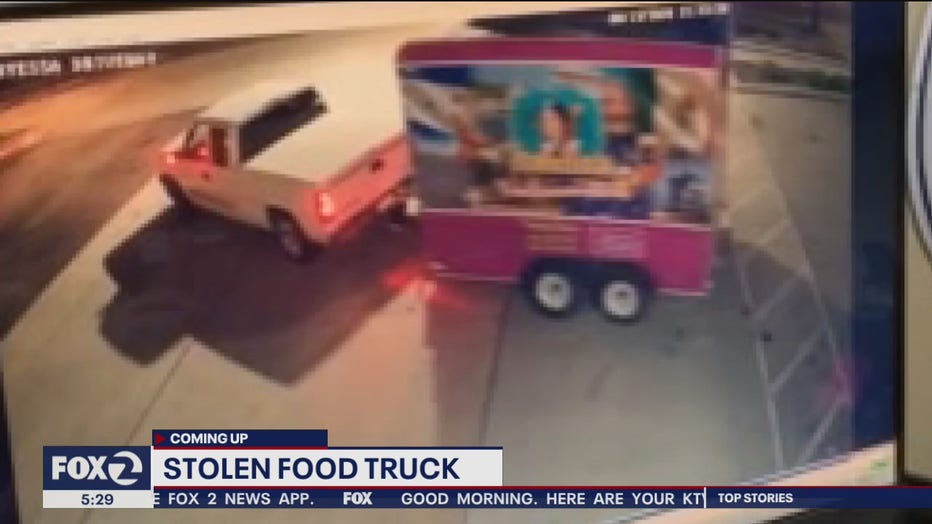 Last Sunday night, surveillance video captured two people in a white pick-up truck seamlessly tow the truck away with a hitch and drive off.

“It’s so simple,” said Trejo. “It doesn’t look like it was anything crazy.”

Trejo believes someone must have seen the theft yet it happened so quick. He is heartbroken for his mom.

“She’s the hardest worker I’ve ever seen,” said Trejo. “What she put in that food truck it was a lot of her dreams. Everything she ever wanted for us.”

Back in June, someone stole the Momolicious food truck from an Emeryville parking lot. It was later found trashed and wedged underneath the Interstate 880 overpass in West Oakland.

“Why? Why take the food truck? Why? For what,” said Ayala.

Ayala hopes a better outcome for her food truck. She forgives the culprit and is hoping whoever stole it has a change of heart after seeing her family and kids.

The owner is months away from paying off the truck. Because of the pandemic, she let the insurance lapse. Meantime, she plans to set up a canopy and sell tacos that way.

A Go Fund Me has been created to help the family.