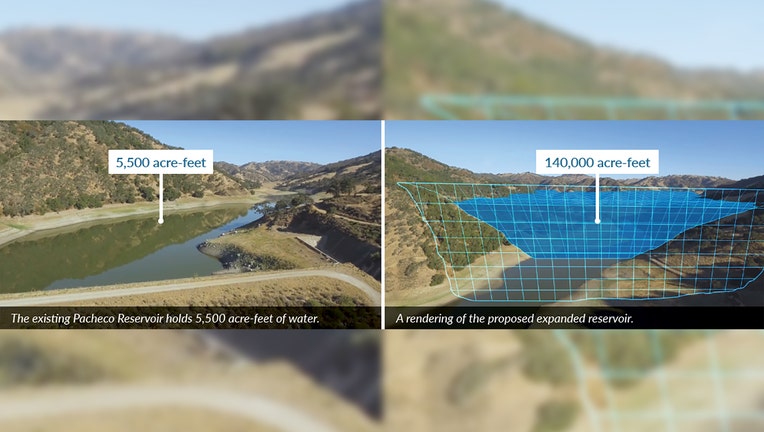 On Friday, Liccardo held a news conference where he emphasized that the $2.5 billion project to boost Pacheco Reservoir's operational capacity from 5,500 acre-feet to up to 140,000 acre-feet is not a smart investment.

Because the county does not have enough water for all its residents, it buys and imports water from other jurisdictions. In fact, half of the water supply comes from outside the county, according to the water district.

The water that the county cannot hold in its own reservoirs gets stored in other reservoirs -- most notably the Orville and Shasta reservoirs which are located roughly 100 to 400 miles away from Santa Clara County respectively.

Storing water in groundwater banks in other counties typically costs $400 to $600 per acre foot, Liccardo said.

"The cost of building and drawing water for the Pacheco expansion would be $18,800 per acre foot," Liccardo said "A dramatic difference."

However, water district leaders said the expansion of the reservoir, located 60 miles southeast of San Jose, is a smart investment because the county would be able to store and control all of its water.

While it doesn't add more to the water supply technically, because imported water is not increasing and just being stored elsewhere, it would place the county in a better position to supply water in case something were to go wrong.

This could be pipes breaking/decaying or an Earthquake occurring that would cause delays in water being delivered to the county -- having potentially disastrous impacts, water district Deputy Officer Aaron Baker said.

The increased expansion would also hold enough water to supply upwards of 1.4 million residents -- a little less than three-quarters of the population -- with water for one year in an emergency.

The estimated 10-year project would result in a 146 percent rate increase for residents by the time it is completed, Liccardo noted.

"There is no question that these water rate increases impact the poor disproportionately," Liccardo said. "This is a real environmental justice issue."

He said he has heard concerns from residents and from small businesses, "all of whom have been struggling," especially because of the pandemic.

If the rate increases were approved, residents would see a 9.1 percent increase as early as July 1, 2021.

That means about a $4.30 monthly increase for the average resident, Taylor said.

But he noted that even without the Pacheco project, staff estimated that water rates would still go up by 8.5 percent for the next eight years.

And the rate increases would pay for roughly half of the $2.5 billion project.

That is because the state allocated a $500 million grant in proposition 1 funding for this reservoir expansion project.

"Our aim is to secure partnerships for about 35 percent, which would take that down by another $800 to $900 million," Taylor said.

The partnerships would be with other counties, but Liccardo thought the water district's estimates on partnerships were "optimistic," if not "delusional," as the mayor believes counties wouldn't help support such an expensive project.

But assuming the water districts hopes of securing 35 percent of the funding from partnerships is correct, it brings the remaining estimated cost to about 1.3 billion, which would be paid by residents.

But to Liccardo - residents don't need to be paying so much.

"(We can) save the money and invest in conservation," Liccardo said. "Let's invest in much less expensive approaches, such as water banks, and maybe there are some more expensive approaches like advanced water recycling but at least they provide new water supply and recycle what we have, rather than spending money on that, something that won't add to our water supply."

Katia Irvin, the water committee chair for the Sierra Club's local chapter said the county's water district could instead invest in stormwater capture projects that would increase water supplies at a much lower cost.

The Sierra Club and the Planning Conservation League are some of the environmental justice groups opposed to the Pacheco Reservoir Expansion.

One of the main components of the opposition is the impacts it would have on local ecosystems.

Both oak woodlands and riparian habitats are not only home to many living creatures, but also act as a barrier between bodies of water that improve water quality, provide erosion control and riverbank protection.

Irvin also said that the construction would also require mining and cement production on site that would also hurt the environment.

Hakes noted the project would actually create more riparian habitat and disputed the notion that oak woodland habitats were not mitigable or replaceable .

"I would politely disagree with her and say that in our discussions with the National Marine Fisheries Service, the US Fish and Wildlife Service, the California Department of Fish and Wildlife, they believe there is a way to mitigate any of the potential impacts that we have," Hakes said.

He also said the water district was awarded the largest grant from Proposition 1 funding from the state because of the environmental benefit.

"Frankly, we're still in the design phase and the environmental review phase," Hakes said. "But to say that there are unavoidable impacts from this, I think it's too early in the process to say that."

The water district board will vote on Tuesday regarding the rate increases, but Liccardo hopes the board will delay the vote and work with the city to come up with different solutions and compromises.