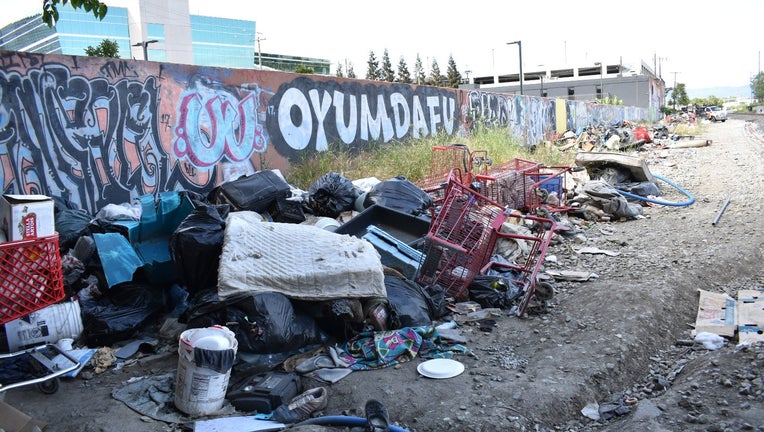 SAN JOSE, Calif. - Of the more than 9,700 homeless people estimated living in Santa Clara County in 2019, at least 161 died in between Nov. 30 last year and Dec. 1 this year, the county medical examiner's office said this week.

HomeFirst, a local shelter and homeless advocacy organization, hosted a memorial Friday afternoon where the names of all those lost were read aloud. A bell tolled after each name as tears were shed inside the shelter.

"We have children sleeping in cars overnight not tucked into a warm bed, we have fellow humans taking refuge in parks, on the stoops of businesses downtown, anywhere they can to protect themselves from the elements, the darkness and the loneliness," Andrea Urton, chief executive officer for HomeFirst, said in the organization's San Jose shelter Friday.

"We have 250 people staying in this shelter alone, and as you well know, shelter is no home."

Last year, the medical examiner listed 157 individuals who died in the county, which shows more homeless people died in the recent count than the year before.

"It makes me feel angry. It's not necessary," Urton said. "In a humane society, it shouldn't be happening."

Earlier in the day, housing advocates -- several of whom have their own experience being homeless or working with homeless people -- held a news conference in memoriam for the lost lives.

The oldest person on the list of the dead was a 94-year-old man, and the youngest were two infants who died the day of their birth. About half of those listed died at age 55 or older.

"There's clearly something that needs to be addressed in our county," Shaunn Cartwright, a San Jose advocate, said Friday. "Everyone knew that Baby Boomers were going to get old, so I don't know how we didn't plan for that. It wasn't a surprise, it didn't sneak up on anyone, and I just feel that's something we really need to address because we're not addressing seniors."

"It's going to take years and years and years to build enough homes, but we know that organized encampments can help people with a dignified way to live," Miron-Conk said. "We're going out and we're looking for private money and private land to pressure people to allow us to build large villages of hope."

Urton, at Friday's HomeFirst memorial, also called on the county's elected officials and residents to do more for homeless people.

"More of everything can be done in the county -- more affordable housing, more shelter, safe sanctioned encampments, bridge-housing solutions -- all of those things are needed," Urton said, also asking for safe-parking programs for cars and RVs throughout the county.

The City of San Jose will soon debut its own bridge housing program, with a tiny-home village called the Mabury Bridge Housing Community opening in mid-January.

However, "we've got a long way to go to end homelessness," Urton said.