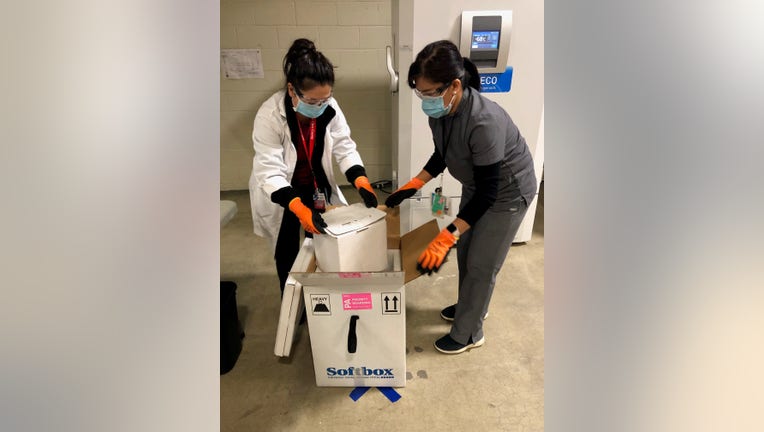 The first group of COVID-19 vaccines arrived in Santa Clara County on Tuesday.

Some counties and elected officials are also pushing for Newsom to reconsider a plan to distribute more vaccine to vulnerable neighborhoods, saying that the ZIP codes he planned to use do not capture all the pockets of poverty in the state, including in the San Francisco Bay Area.

The angst over vaccine delivery comes as California slowly reopens more of its economy and allows more activities, including theme parks at reduced capacity. The chief executive of the Walt Disney Company, Bob Chapek, said Tuesday that Disneyland Resort will likely reopen by late April.

Santa Clara County Executive Dr. Jeff Smith said late Monday that the county will not sign a contract with the health insurance company because it would not improve speed or efficiency, The Mercury News reported.

In a statement to The Associated Press sent Tuesday, Santa Clara County said it has been distributing the COVID-19 vaccine from the start, ensuring equitable outreach to socially disadvantaged communities, including farmworkers. The county noted that its allocations have decreased recently and are expected to drop further.

The state’s switch to a vaccine appointment and delivery system administered by Blue Shield was expected to be completed by March 31. Skepticism, however, has surfaced among the state’s 58 counties.

So far, only Kern County has signed a contract with Blue Shield. Orange County’s Board of Supervisors won’t even consider signing the contract for another two weeks.

Marin County’s health officer, Dr. Matt Willis, told county supervisors they are "not super eager" to switch over to the state’s new scheduling system, called My Turn, because the county’s system is more precise in reaching sub-groups of residents, such as teachers.

The state turned to Blue Shield to create uniform rules and increase the rate of vaccinations, with the state’s My Turn system serving as the central portal for getting appointments. Blue Shield is also tasked with improving service to hard-hit communities.

About 40 federally qualified health centers, 28 hospitals, four large medical groups, three pharmacies and three tribal clinics have signed on, according to the company.

The state’s public health department said it has signed up dozens of providers totaling more than 1,000 vaccination sites. The agency did not say what would happen if Santa Clara does not join the system.

"Our goal is to save lives by helping to provide all Californians equitable access to the vaccines, especially in those communities hardest hit by the pandemic," Blue Shield spokesperson Matthew Yi said in a statement.