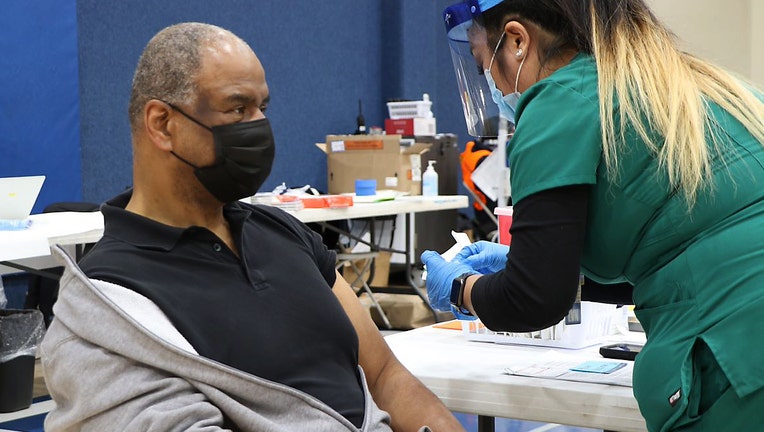 A man receives a COVID-19 vaccination on the first day of operations at Gilroy High School in Gilroy, Calif. on Wednesday, February 24, 2021. The site can vaccinate about 1,000-2,000 residents per day in a city that has been disproportionately impact

SAN JOSE, Calif. - The Santa Clara County Board of Supervisors has approved the allocation of American Rescue Plan Act stimulus funds to provide bonuses of up to $2,500 to county employees for their work during the pandemic.

The vote Tuesday spends about $76 million out of the county's first tranche of $187 million ARPA funding to provide one-time payments to nearly all 22,000 county employees by Dec. 3 of this year.

The county is expected to receive its second tranche of $187 million in ARPA funds in May 2022.

The only county employees excluded from receiving bonuses that the county is calling "Hero Pay" are the five county supervisors and County Executive Jeff Smith.

It's a notion that made Supervisor Otto Lee seemingly uncomfortable and may explain his decision to abstain from the vote. Had he voted in favor, the Hero Pay would've passed unanimously by the board.

"I have concerns about how this came about ... I would not want to, as an elected official, vote for a $2,500 bonus for myself," Lee said. "I think, for so many reasons, that the amount that has been provided here seems, I know it's very generous, but in some ways, this is overly generous."

Lee also asked that staff create a way for county employees to opt out of getting the Hero Pay for those who feel uncomfortable or not in need of receiving the $2,500.

Board president Mike Wassermann tried to extend the Hero Pay to Smith, because of his "Herculean" efforts during the pandemic, but Smith graciously refused to accept it.

In-Home Supportive Services independent providers will get a $500 bonus from the county to augment the additional $500 they are getting from the state.

Ellenberg noted that the $2,500 is double what other similarly populated counties are giving in Hero Pay.

Smith said the reason for the amount is because he felt it was in line with what supervisors wanted and joked that it was because the board is "twice as progressive."

"We felt strongly that everyone in the county employed actually participated vigorously to the greatest extent possible in providing a response to the pandemic," Smith said. "Therefore, we didn't feel administratively that we could take a group or a particular job or particular activity and that was more deserving of a larger amount of money than any other."

Smith also noted that ARPA funding stipulates that some be used for Hero Pay, so providing these bonuses is in line with how the federal government envisioned these dollars being used.

"We're just following through with the intention of the bill," Smith said.

The county is also still deciding how to provide bonuses for the roughly 3,000 "extra help workers" who did not have a regular schedule and instead intermittently supported county efforts.

Extra help workers, often referred to as permanent intermittent workers, can be found in "pretty much all departments doing a wide variety of things," including nurses, clerks, secretaries or social workers, Smith said.

"We still have to work out a formula," the county executive continued. "We haven't been able to come up with something we'll agree upon."

Smith said the county will still need to deliberate with several unions to ensure everyone is on board with the Hero Pay before the money is distributed in December.