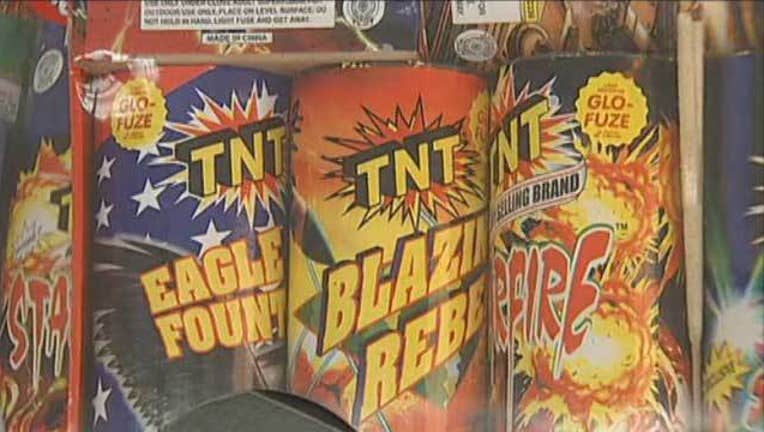 SAN JOSE, Calif. (KTVU and wires) -- Anyone who uses fireworks illegally in unincorporated Santa Clara County will be fined under an ordinance passed Tuesday by the Board of Supervisors.

The board approved the ordinance by a 4-1 vote that will impose a $350 fine for the first violation, $700 for the second violation and $1,000 for the third time property owners are caught discharging fireworks without a permit.

In addition to the violation fees, people found discharging fireworks would incur the costs from injuries and property damage.

The fines would be imposed on any property owners if they know illegal fireworks are being discharged on their land.

Sheriff's deputies have difficulty enforcing rules when fireworks are illegally discharged because people tend to flee the scene after committing the act, Gallegos said.

People unaware of fireworks discharged on their property will receive a letter informing them of the infraction and may receive a citation for any future violations, but are expected to make sure there aren't any subsequent violations, according to Gallegos.

The ordinance is similar to "social host" ordinances, which fines adults caught giving alcohol to anyone under 21 years old.

Supervisor Joe Simitian, the lone "no" vote, expressed concern that people with large properties could have no knowledge of or control over trespassers discharging fireworks on their land without their knowledge.

Simitian also questioned if property owners who receive a letter of the first violation would be expected to hire private security to prevent future violations.

An enforcement officer would have discretion over whether or not a violation was made, Gallegos said.

Consideration would be made to a property owner who received a letter regarding the first incident and faced a second violation, but made efforts in securing their land and discouraging trespassers.

People who are fined have the option of appealing to a hearing officer, according to Gallegos.

Simitian said that the ordinance allows for "too much discretion" and "makes the victim the perpetrator of the crime."

While running in a special election for the District 2 seat in 2013, Supervisor Cindy Chavez said she went to multiple neighborhood association meetings where many people were "concerned about the absence of anyone really being responsible" for lighting up fireworks.

Many fireworks have been illegally discharged in the county's east foothills posing a fire risk, Chavez said.

Despite an education campaign by the county fire department and increased patrols by the Sheriff's Office, there are still obstacles in forcing violators into compliance with current laws, according to Chavez.

While Chavez echoed Simitian's concerns, she supported the ordinance, which she said the county needs.

"With our dry drought conditions, there's a real fear of sparks igniting fires in neighborhoods and in our hills," Board President Dave Cortese said.

"We needed this ordinance to help law enforcement hold responsible parties accountable whether they are tenants, property owners or apartment managers," Chavez said.

The board is scheduled to make a final vote on the ordinance at its on June 23 meeting.