The county was flagged Wednesday and added to the state watch list after passing 100 cases per&nbsp;100,000 residents.

SANTA CRUZ COUNTY, Calif. - Santa Cruz County Public Health Officer Dr. Gail Newel announced Thursday that the county has been flagged by the state for a significant increase in COVID-19 cases, with shutdowns of many types of indoor businesses and activities imminent.

The county was flagged Wednesday after passing 100 cases per 100,000 residents and is currently over 850 cases countywide, according to Newel. More than 500 of those cases occurred in the last two weeks.

The county will be flagged for three days before it officially gets put on the state's watchlist. When it is placed on the watchlist, all indoor operations like gyms, hair/nail salons and religious gatherings will have to shut down to limit the spread of the virus.

Schools will also have to switch to a distance learning model in the fall, but elementary schools may have the option to submit a waiver to the state to request using a hybrid or in-person model, Newel said.

"As expected, most of our new cases have been through person-to-person spread, through close contact usually," she said. "It's those multi-household unit gatherings of friends and families."

Most cases, according to Newel, are in the southern part of the county in Watsonville and unincorporated areas. The Latinx community has been disproportionately affected but the county is also seeing increased cases among white residents. The most impacted group, however, is among young adults ages 18-34.

"This is understandable because this age group works often at the front line as essential workers ... it is also an age group that has grown fatigued of being sheltered in place," Newel said. 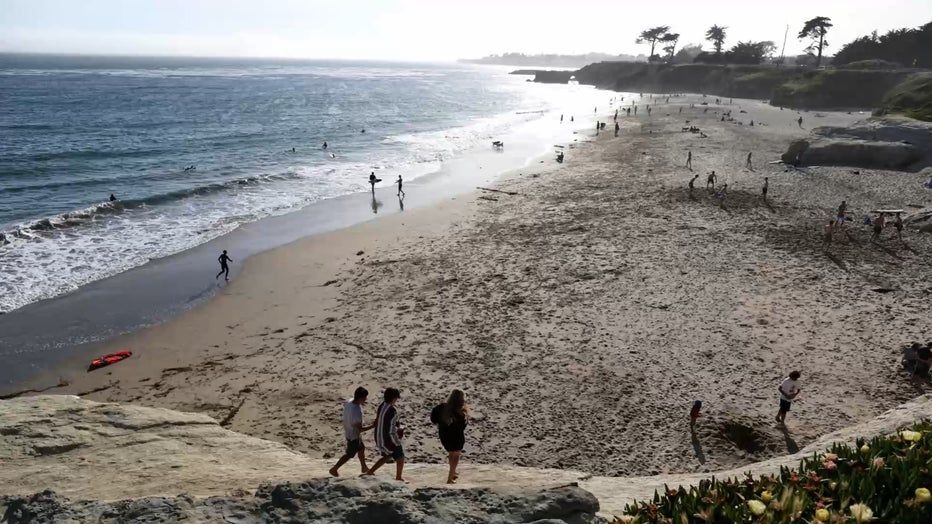 SANTA CRUZ, CA -- MAY 08: Beachgoers at Lighthouse Field State Beach on Friday, May 8, 2020, in Santa Cruz, CA. As the number of confirmed COVID-19 cases in Santa Cruz County continue to rise the City of Santa Cruz is taking necessary precautionary e

"The hospitalization rate is going up but so far is manageable. As we have said before, our main concern is ICU capacity, so far that still continues to look good," said Santa Cruz County EMS Medical Director Dr. David Ghilarducci.

The county is looking at ways to maximize any space in its hospitals before opening up surge and alternate care sites.

However, Ghilarducci said personal protective equipment resources and the amount of remdesivir, one of the two effective medicines in combatting COVID-19, are stressed.

"We have this exponential growth in our case rate," Hall said. "Our private labs have sometimes a 7-10 day turn around rate for tests, which makes it very, very difficult to contact cases right away."

The labs have been getting nearly 50-100 tests daily, which has overwhelmed staff, Hall said. The county has had to prioritize who gets tested and which cases get traced. The first priority are vulnerable people and the second is health care and frontline workers.

The county has spent more than $1 million to quadruple University of California at Santa Cruz's testing capacity, which would allow the county to not rely on private or state labs.

There have been outbreaks among nurses, a shelter in the south county, some long-term care facilities and in various workplaces. However, outbreaks in workplaces have just impacted employees and not other members of the public, according to Hall.

"The most effective and efficient way to control and contain the spread of the disease and save lives is no longer relying on contact tracing alone." Hall said. "When you get to this state of the pandemic, you cannot contact-trace or test your way out of it. When it becomes a population-sized problem, you have to take a population approach which is what we are doing."

"We have a steeper upward curve than ever, but at any point we could again flatten the curve and all it would take is for every member of the community to follow the simple social distancing requirements," Newel said.