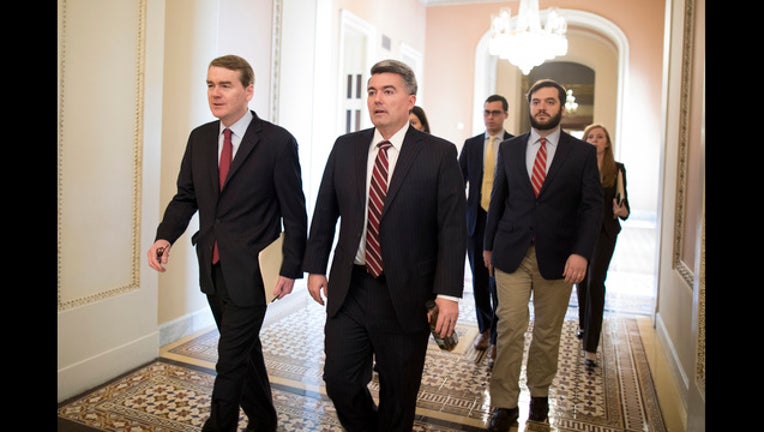 WASHINGTON (AP) - The Senate rejected both a bipartisan immigration plan and a more restrictive proposal by President Donald Trump on Thursday, suggesting the latest election-year debate on an issue that fires up both parties' voters will produce a familiar outcome: stalemate.

Facing a White House veto threat and opposition from the Senate's GOP leaders, the chamber derailed a plan by bipartisan senators that would have helped 1.8 million young immigrant "Dreamers" achieve citizenship. It also would have doled out $25 billion for Trump's coveted wall with Mexico and for other border security measures, but it didn't go as far as Trump wanted in curbing legal immigration.

It lost 54-45, six short of the 60 votes that were needed for passage. That scuttled what had seemed the likeliest chance for sweeping immigration legislation to make it through the Senate this year.

Trump's own plan fared even worse as 60 senators voted no and just 39 voted for it -- 21 shy of the 60 needed. The embarrassing outcome for the president underscored the feelings of Republicans concerned about election damage in swing states with high numbers of Hispanic voters.

Top Democrats had held out faint hopes that the bipartisan package would prevail, or at least force Trump to negotiate further. But he proved unwilling to fold on his demands for a tougher bill, reflecting the hard-line immigration stance that was a cornerstone of his 2016 presidential run.

In a written statement earlier Thursday, the White House labeled the bipartisan proposal "dangerous policy that will harm the nation." It singled out a provision that directed the government to prioritize enforcement efforts against immigrants who arrive illegally beginning in July. Trump and GOP leaders said he'd already shown flexibility by offering a 10- to 12-year path to citizenship for so many Dreamers, a key demand for Democrats and some Republicans.

Minutes later, the chamber voted against Trump's proposal. Besides helping Dreamers achieve citizenship, the president's measure would have provided wall funding in one burst, rather than doling it out over 10 years as the bipartisan plan proposed.

"Dreamers" are immigrants brought to the U.S. illegally as children who risk deportation because they lack permanent authorization to stay.

Trump annulled the Deferred Action for Childhood Arrivals program, or DACA, that President Barack Obama created that's protected the Dreamers. He's given Congress until March 5 to restore the program, though federal courts have blocked him temporarily from dismantling it.

Senate leaders opened the day's debate by trading blame. Senate Majority Leader Mitch McConnell, R-Ky., assailed Democrats for failing to offer "a single proposal that gives us a realistic chance to make law." Instead, he said, Democrats should back Trump's "extremely generous" proposal.

Instead, Democratic leaders rallied behind the bipartisan plan. Eight Republicans joined most Democrats in backing that compromise, while three Democrats joined most GOP senators in opposing it.

Senate Minority Leader Chuck Schumer, D-N.Y., said Trump has "stood in the way of every single proposal that has had a chance of becoming law." He added, "The American people will blame President Trump and no one else for the failure to protect Dreamers."

Overnight, the Department of Homeland Security said in an emailed statement that the bipartisan proposal would be "the end of immigration enforcement in America."

That drew fire from Sen. Lindsey Graham, R-S.C., one of eight GOP co-sponsors of the bipartisan plan. "Instead of offering thoughts and advice -- or even constructive criticism -- they are acting more like a political organization intent on poisoning the well," Graham said in a statement.

The bipartisan compromise was announced Wednesday by 16 senators with centrist views on the issue and was winning support from many Democrats, but it faced an uncertain fate.

Besides opposition by the administration and leading Republicans, the bipartisan plan prompted qualms among Democrats. The party's No. 2 Senate leader, Dick Durbin of Illinois, said some Democrats had "serious issues" with parts of the plan. Those concerns focused on its spending for Trump's wall and its prohibition against Dreamers sponsoring their parents for legal residency.

The moderates' measure would not have altered a lottery that distributes about 55,000 visas annually to people from diverse countries. Trump has proposed ending it and redistributing visas to other immigrants, including some who are admitted based on job skills, not family ties.

Also rejected was a more modest plan by McCain and Sen. Chris Coons, D-Del. It would have let many Dreamers qualify for permanent residency and directed federal agencies to more effectively control the border by 2020. But it didn't offer a special citizenship pathway for Dreamers, raise border security funds or make sweeping changes in legal immigration rules.

A proposal by Sen. Pat Toomey, R-Pa., was killed that would have added language blocking federal grants to "sanctuary cities," communities that don't cooperate with federal efforts to enforce immigration laws.