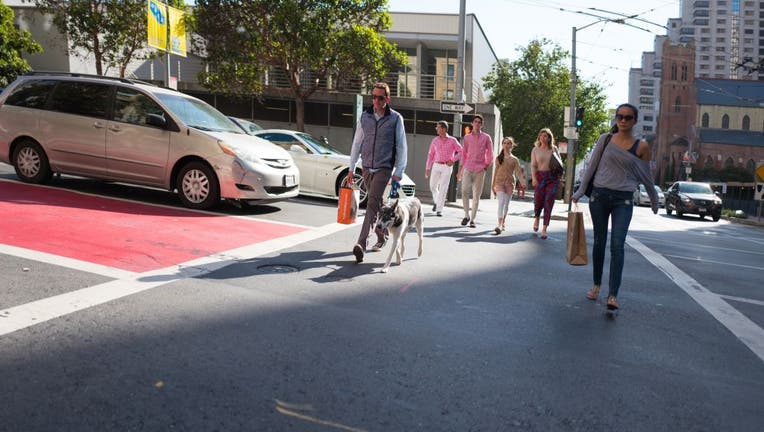 A group of people cross a street at a crosswalk, San Francisco, California, September 4, 2016. (Photo via Smith Collection/Gado/Getty Images).

SAN FRANCISCO - Sunday Streets returns to San Francisco in October, city officials announced on Monday. But there’s plenty of city sanctioned opportunity to safely enjoy the outdoors in the meantime.

The announcement by Mayor London Breed, San Francisco Municipal Transportation Agency Director Jeffrey Tumlin and the nonprofit Liveable City said until then, residents can enjoy small-format programming starting in April as part of the Rise Together season programming. These are car-free, health-order compliant spaces throughout the city’s neighborhoods.

The programming is building up as the city emerges from the pandemic, which took away the block party like atmosphere of the Sunday Streets events.

The exact date and location of Sunday Streets’ October return has yet to be announced.

"Sunday Streets is all about celebrating the connections that make our communities and our city strong, and these connections are more important than ever as we move forward with our recovery from this pandemic," said Mayor Breed. "Although we need to take care to do things safely by staying outdoors, keeping things small, and staying masked, this is an exciting part of our reopening for all of our residents and families. Sunday Streets Rise Together programs will give friends and neighbors the chance to socialize and come together safely after having been apart for so long."

One of the projects Sunday Streets Rise Together has been collaborating on is the Chinatown Walkway Weekends in conjunction with Chinatown Merchants Association. The event is scheduled to run every Saturday and Sunday from 11:00 a.m. to 5:00 p.m. on Grant Avenue between California and Washington Streets at least through the end of June.

The Rise Together programs will be announced throughout the year with the spring calendar officially kicking off in April.

The launch of Bayside Saturdays boasts a new walking and bike path on Hunters Point Boulevard. The Bayview Quick-Build walking/bike path features new murals from African American and Bayview-based artists. There will also be free fitness classes, giveaways and businesses offering specials to visitors who "choose their own adventure" every Saturday in April between 10:00 a.m.-3:00 p.m.

To keep up with the latest announcements on these programs, sign up for Livable City’s newsletter or visit SundayStreetsSF.com to make sure you don’t miss out on a Rise Together happenings as they are announced throughout 2021.