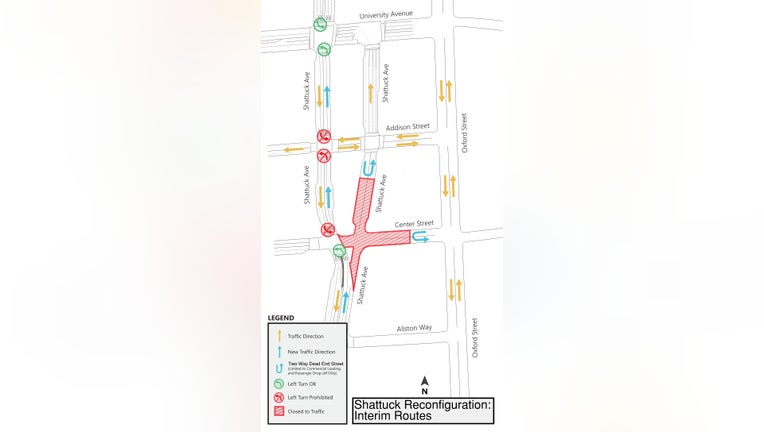 Starting on the week of Dec. 16, northbound drivers on Shattuck will stay on the same stretch of road as southbound drivers on the section between Center Street and University Avenue rather than the current route veering right of that stretch.

That current northbound stretch will temporarily close so crews can raise the pavement to the same height as the sidewalk to calm traffic and improve pedestrian safety. From Dec. 16 until Dec. 20, certain intersections on Shattuck will have four-way flashing red lights that should be treated as stop signs, according to the city.

City officials say the current route for the road requires a laborious set of turns that slow traffic and endanger pedestrians. Various Alameda-Contra Costa Transit bus stops in the area will also eventually be consolidated to a single block adjacent to the Downtown Berkeley BART station.

"We want Shattuck Avenue to be safer for all, no matter if you come by foot, bike, BART, AC Transit or car," City Manager Dee Williams-Ridley said in a news release.

More information about the project can be found on the City of Berkeley's website.