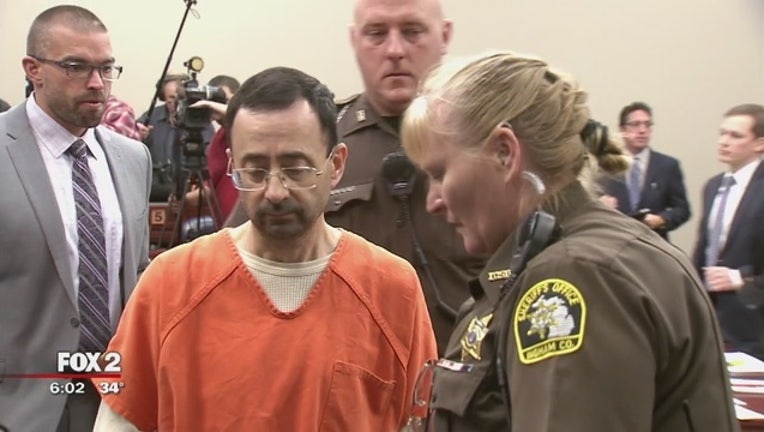 LANSING, Mich. (AP) -- A Michigan State University official who oversaw Larry Nassar was arrested Monday amid an investigation into the handling of complaints against the now-imprisoned former sport doctor.

William Strampel was in jail pending an arraignment, Ingham County Sheriff Scott Wriggelsworth told The Associated Press. He declined to say what charges Strampel was facing because the probe is being led by the Michigan attorney general's office.

A spokeswoman for Attorney General Bill Schuette declined to comment. A news conference was scheduled for Tuesday.

Strampel, 70, is the first person to be charged in connection with the scandal besides Nassar, who is serving decades in prison for molesting patients under the guise of treatment and for possessing child pornography. Strampel was the dean of the College of Osteopathic Medicine, which includes the sports medicine clinic, until he announced a leave of absence for medical reasons in December. He told police last year that he never followed up after ordering Nassar to have a third person present during certain treatments.

In February, interim Michigan State President John Engler announced plans to fire Strampel, who still has tenure that protects his employment as a faculty member.

In 2014, Strampel ordered Nassar to have another medical staffer in the room when providing treatment to "anything close to a sensitive area." He also said any skin-to-skin contact needed to be explained in detail.

"I am happy to have you back in full practice," Strampel told Nassar in an email.

Nassar was fired in 2016 for violating the rule. His dismissal came less than a month after former gymnast Rachael Denhollander filed a criminal complaint saying Nassar had sexually assaulted her with his hands while treating her for back pain years earlier.

Strampel told a campus detective and FBI agent in 2017 that he had never followed up to see if Nassar was following the order because Nassar had been "exonerated" in an investigation of a patient's complaint and the imposed guidelines were "health care 101."