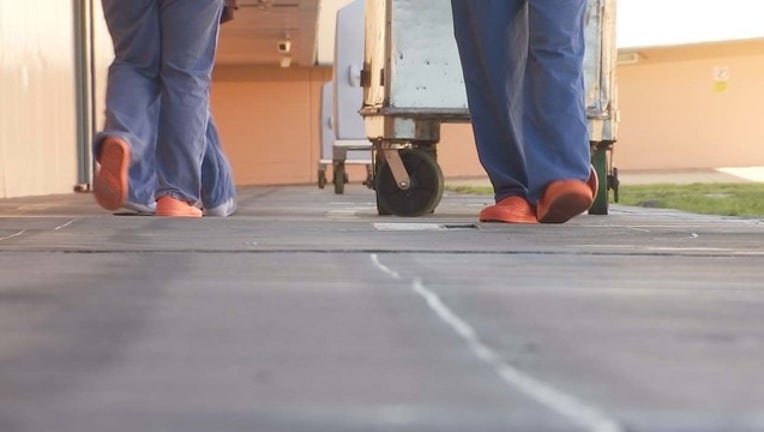 DUBLIN, Calif. - The Alameda County Sheriff is increasing his proposal to fund Santa Rita Jail at a time when its inmate population is at an all-time low and government budgets throughout the county face massive budget deficits because of the coronavirus pandemic.

On Tuesday, Sheriff Gregory Ahern was poised to formally ask the board of supervisors for $318 million over the next three years to hire 349 positions for his office and 107 positions from the county's behavioral services agency to help at his correctional facility.

Ahern had first proposed the idea for more deputies at the end of March. But at that time, he was asking for $85 million a year for the next three years, for a total of $255 million, to hire 260 more deputies. Critics at the time said that it appeared as though this was a "money grab," and the board delayed the vote. Late Tuesday morning, the vote was delayed again.

Ahern's new request, while more than a month ago, keeps the sheriff's budget portion at about $85 million, while the additional funds would be for more behavioral health care service employees to work at the jail.

Over the last decade, the sheriff’s budget has grown by $144 million. This year, the budget is already just over $440 million.

Santa Rita also has the notorious distinction of having the highest in-custody death rate in the Bay Area, an investigation by this news organization found.  The same investigation also found that at least 80 percent of those who committed suicide at the jails were also were kept in some form of isolation.

In order to alleviate some of the issues, the experts noted that the sheriff should hire 259 deputies and 70 more civilians to "safely operate" the jail.

"For many years, the sheriff has expressed to the Alameda County Board of Supervisors the need for additional staff and funding," Sgt. Ray Kelly said in an email Monday. "Many people called for an audit of our budget and we welcomed that audit because it would show and validate what the experts are now saying."

Kelly added: "This budget request will bring us in line with the expert recommendations and provide more comprehensive services to inmates with mental and behavioral health issues."

He said the vacant positions are deputies who have been not working due to long-term injury and illness.

"We can’t hire behind those people because we still pay their salary and benefits," Kelly said. "Industry-wide, 10% of most police agencies have this same issue. We are also not authorized to hire behind injury vacancies. "

The report is a result of a federal class-action lawsuit filed in 2018, where plaintiffs Ashok Babu et al. sued Alameda County and the Sheriff's Office over their mental health care. Plaintiffs are being represented by Kara Janssen and Jeff Bornstein of the San Francisco firm, Rosen, Bien, Galvan and Grunfeld.

In order to avoid a trial, both sides have been meeting regularly to make changes at the jail to improve the mental health care of inmates. The county has already agreed in concept to address several of the issues, including providing 24/7 mental health staffing at the jail and giving inmates more out-of-cell time and programming, the experts noted.

The panel of experts who wrote the report are: Dr. James Austin, an expert in correctional planning and sociology; Dr. Kerry Hughes, a mental health and suicide prevention expert; Terri McDonald, an expert in restrictive housing;  and Michael Brady and Rick Wells from Sabot Consulting, experts in disability access and custody staffing.

What the panel did not really take into account, though, are two major factors directly linked to the coronavirus pandemic:

"I'm not sure where the sheriff thinks that money is going to come from," said Jose Bernal, senior organizer of the Ella Baker Center and a vocal critic of the sheriff.

None of the board of supervisors responded for comment on Monday.

Last month, board president Richard Valle said he would visit the jail and think about the request, but he never reported out his opinions to KTVU. He did not respond again for comment on Monday.

Critics agreed with many of the shortcomings the experts noted in their report, but they disagreed with the notion that taxpayers should be paying for more deputies.

Instead, they argued, money should be spent on community-based mental health care and that many people with mental health issues shouldn't be in jail in the first place.

John Lindsay Poland, a member of the American Friends Service Committee, pointed out that the sheriff's department already has 150 deputy vacancies. And he questioned why and how the sheriff thinks he could fill these positions now.

He also pointed to a line in the report that stresses the analysis is not a comprehensive staffing analysis and a further one should be conducted once the suit settles.

And finally, Lindsay Poland noted that the report never addressed one of the biggest concerns at the jail: Why 45 people have died in custody since 2014.

"There isn't any reflection about their policies and if anything needs to be done differently there," he said. "The sheriff is asking for a lot of money, but there is no indication the department is looking inward."

HIGHLIGHTS OF THE EXPERT PANEL REPORT

The expert panel analyzed 53,000 pages of documents, along with video recordings of use-of-force incidents at the jail. The experts spent two days at jail, conducting the bulk of their work before the COVID-19 pandemic.