A law enforcement source tells KTVU Thursday morning's fatal shooting near the Bay Bridge toll plaza appears to have been deliberate. The victim was identified as a 29-year-old Oakland woman.

OAKLAND, Calif. - Detectives are investigating a deadly shooting near the Bay Bridge toll plaza on Thursday morning, which killed a woman in what appears to be a deliberate act.

A law enforcement source has identified the woman as Amani Morris, 29, of Oakland. Her body was found just after the 10 a.m. shooting in the passenger's seat of a burgundy SUV.

The driver was apparently able to get off the freeway and pull off to the side of the access road to the toll plaza offices.

The CHP Golden Gate Division said a male driver and two minors were also in the SUV, a Buick Rendezvous. They were all uninjured.

Not much else was officially revealed by the CHP, which said earlier this month that nearly 80 shootings have been reported on freeways in Alameda County in the last 12 months.  Nearly two weeks ago, a 23-month-old boy, Jasper Wu, was shot and killed by a stray bullet while he was in his car seat traveling on I-880.

Detectives are investigating a deadly shooting near the Bay Bridge toll plaza on Thursday morning, the California Highway Patrol said.

Video at the scene showed warms of CHP cars on westbound I-80 surrounding the SUV, which had been struck by gunfire just east of West Grand Avenue in Oakland. CHP said they took the phone call about the shooting at 9:12 a.m.

The CHP has not disclosed any more details and no motive was given. It's unclear who shot at the SUV. A description of the suspect vehicle has not been released.

There is also no word if the suspect vehicle carried on through the toll plaza, whether it was caught on camera, or if its license plate or FasTrak transponder were captured as it made its way onto the bridge.

Traffic was snarled for hours after the shooting by CHP cruisers that were collecting evidence.

"It's extremely scary that the roads and freeways aren't safe anymore," said Raufat Ikharo of Antioch.

"I can't imagine being in a car driving and all of a sudden getting hit by a bullet. It's very traumatizing," Savier Woodfox of Oakland said. He works as a driver for a food delivery service.

He said the frequency of freeway shootings in Oakland is alarming.

He said he's careful to avoid getting involved in a road rage incident.

"It's got me very mindful, very cautious and mindful of your surroundings," Woodfox said. "More aware of what you're doing and how you go about doing it,."

SEE ALSO: Toddler killed in broad daylight freeway shooting on I-880 in Oakland

Police investigated reports of a possible shooting on the Bay Bridge on Thursday morning, the California Highway Patrol said. Several lanes of traffic were shut on westbound I-80. Aerial footage from SkyFOX captured some of the scene. 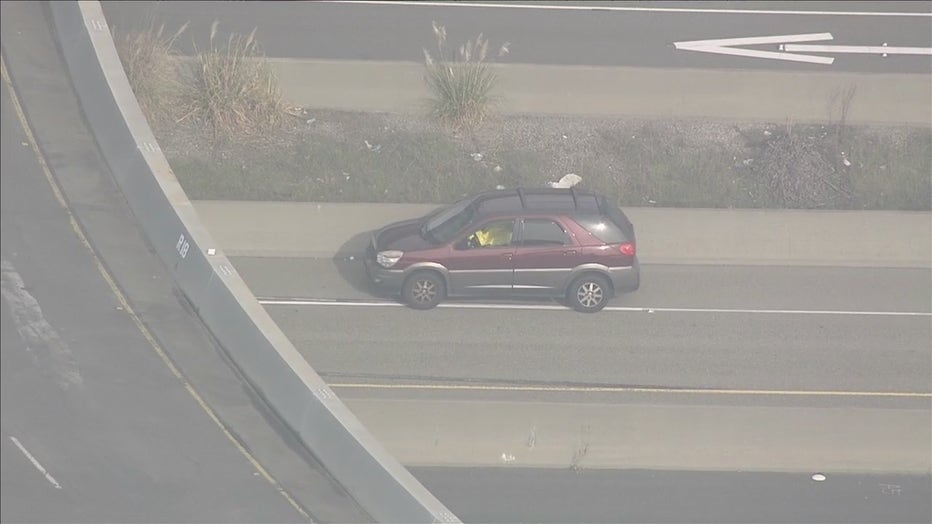 Police were investigating reports of a possible shooting on the Bay Bridge on Thursday morning, the California Highway Patrol said. Swarms of CHP cars were seen on westbound I-80 near West Grand Avenue in Oakland. Nov. 18, 2021