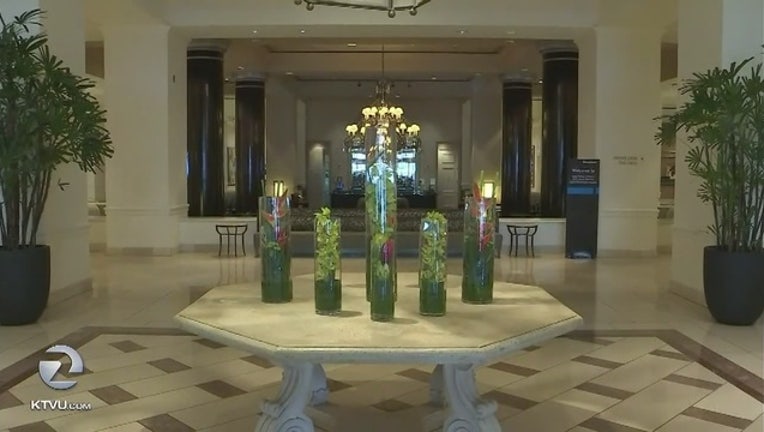 A homeless San Jose resident was denied bathroom service at the famous Fairmont Hotel and it led to highlighting an agreement made between the hotel and the city that makes the first-floor available for all.

This, after a homeless resident was denied the use of a bathroom at a luxury downtown hotel. What followed is a lesson in law, and a little know provision everyone is entitled to. A recently publicized question and quest by a homeless resident has brought to life the fine print in the hotel’s agreement with the city.

In the shadow of splendor, squatters roam freely. And when nature calls, few have a safe or clean place to go, or give any thoughts to using facilities inside the famous Fairmont Hotel.

“I’m logical enough to know that, some places people don’t want you there,” said Robert Overbey, who has been homeless for nearly three-decades.

The 22-story Fairmont is opulent on the inside, and according to an agreement signed with the city 30 years ago, open on the first floor to all. It was part of a deal to secure $20M in public funding to help the once floundering landmark.

“You’re putting a lot of public dollars into it. And you need to get something in return. And so public access seemed to be the best way to go,” said San Jose city attorney Rick Doyle.

He unearthed a copy of the “Declaration of Covenants, Conditions and Restrictions” that’s part of the deal. Section four, pertaining to the Fairmont’s first floor, reads, “…Members of the general public shall be allowed access to and the right to use on a non-exclusive basis…”

“They have to allow members of the public, and that includes the homeless, to be able to use the bathroom,” said Doyle.

“Of course they’re not wanted in the Fairmont. That’s where the big cheeses stay. But it’s unfortunate that it has to come to that. That people are basically looking to use the restroom and have nowhere to go,” said Scott Wagers, a San Jose homeless advocate and pastor of CHAM Deliverance Ministries.

Fairmont managers declined an on-camera interview with KTVU and instead emailed a statement which reads, in part,: “…Our hotel has a covenant with the city…and we are proud to honor this agreement. We work hard to ensure our hotel remains a place where locals and guests can feel welcome…”

Doyle says they’ve had to remind the Fairmont of the covenant from time-to-time. Back in Cesar Chavez Park across from the hotel, Robert Overbey says knowing the law likely won’t change his behavior.

“…Because I know they don’t want me in there,” he said.

Overbey says it’s not just the Fairmont – he gets a cold reception anytime he tries to go in and use a bathroom. The city manager says the hotel can implement reasonable restrictions, but it cannot bar entry, to anyone, and this is an enforceable agreement with continued violations bringing fines.