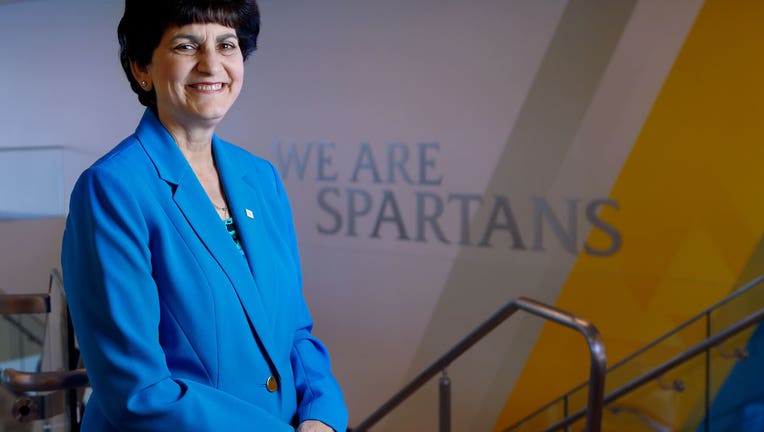 SAN JOSE, Calif. - San Jose State University president Mary Papazian announced her intention to resign at the end of the fall semester in a letter to the campus Thursday.

Her resignation comes as she faces criticism of her handling of a sexual abuse case that resulted in a recent $1.6 million settlement with the U.S. Department of Justice to victims.

In Papazian's letter, she said she would "continue to participate in and support the ongoing external Title IX Procedural Investigation and investigations surrounding former SJSU Director of Sports Medicine Scott Shaw."

Papazian is the university's 30th and third woman president. She is also the fifth president the university has had since the sexual abuse allegations surfaced more than a decade ago.

The first complaints against Shaw were reported in 2009 when female swimmers accused the trainer of inappropriately touching them while treating their injuries.

The allegations were ignored for many years and Shaw continued to work as an athletic trainer until he resigned in 2020 -- four years into Papazian's tenure and one year after a new investigation was launched.

At the time of Shaw's resignation, then-Athletic Director Marie Tuite was reassigned to a fundraising role before leaving the school in August.

Tuite and Papazian were both allegedly in the know and the university still faces legal claims from some of Shaw's nearly two dozen victims, SJSU swim coach Sage Hopkins and a former deputy athletics director who accuse university officials of covering up staff and student misconduct and retaliating against those who spoke up.

Though Papazian was the one who launched the investigation into the sexual abuse allegations, the U.S. Department of Justice's explosive report accused the president of only acting after outside groups pressured her to do so -- and even then -- failed to do a complete investigation.

In her letter, Papazian said her transition "does not impact our intention and obligation to understand what occurred and how the university responded at the time.

"I made a promise to our community and to the affected student-athletes and their families, and I plan to honor it," Papazian continued. "My heart, apologies and prayers continue to be with those students who suffered a breach of trust during their time at the university."

It is unclear who will replace Papazian once she leaves effective Dec. 21. During the transition period, California State University Chancellor Joseph Castro will meet with campus stakeholders to name an interim president. Once a person is named, the CSU Board of Trustees will begin a national search for the university's 31st president.

Papazian said she made this decision with the "interest of the campus at the forefront."

While her five-year tenure may be tainted by the mishandling of sexual abuse reports, her time was still marked by notable achievements.

She launched the Office of Diversity, Equity and Inclusion in 2016 and established the Division of Research and Innovation in 2019 to grow the university's intellectual property portfolio.

"I truly love this university and believe this choice will allow the focus to be positively and solely on our talented, diverse, and outstanding campus," Papazian said.