LOS ANGELES - Many areas of the country have been hit by major snowstorms this season — with more accumulations, ice and frigid temperatures expected in the days ahead. What better way to spend a snow day than snuggled on the couch enjoying a movie marathon?

Given the ongoing coronavirus pandemic, you’ve likely already spent plenty of time at home watching television and movies. Here are some free on-demand movies available on Tubi you may not have seen yet, ranging from thrillers to romcoms to kid-friendly films and documentaries.

The video-on-demand service features hundreds of free TV and movies to choose from, so make yourself a cup of hot cocoa and grab a blanket, because it’s snow-time!

A Frosty Affair (2015) - Comedy, Adventure, Romance
A small-town teacher is forced to travel with a stranger during a blizzard to make it to her wedding in the city, leading her to question her life choices.

Let It Snow (1999) - Comedy, Romance
A man who met his ex-lover on a magical snow day four years ago prays for one more chance at love with her when she gets engaged to someone else.

Wit’s End (2020) - Thriller, Adventure, Drama
A loving husband and father battle a harsh countryside and an unrelenting blizzard in his quest to return home to his family.

Snow Queen (2012) - Animation, Kids & Family, Fantasy
When the heartless Snow Queen blankets the world in ice, a young girl sets out on an arduous quest through the winter wonderland to save her brother.

Ashes in the Snow (2019) - Drama, War
During World War II, a 16-year-old aspiring artist and her family are deported to Siberia amidst Stalin's brutal dismantling of the Baltic region. One girl's passion for art and her never-ending hope will break the silence of history.

Frozen Kiss (2009) - Drama
True-life thriller about a young couple who get high on meth and stranded in a blizzard, off police radar, while trying to escape mysterious stalkers. 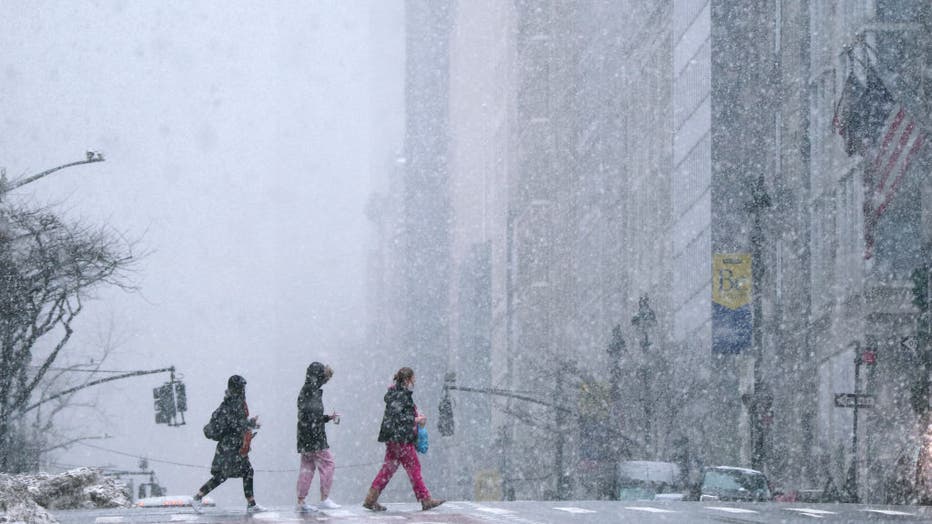 FILE - People walk across Fifth Avenue during a snowstorm on Feb. 7, 2021 in New York City. (Photo by Gary Hershorn/Getty Images)

The Alaskan Frontier (2016) - Documentary
See Alaska without leaving home in this remarkable journey of America’s largest state and last frontier, filled with wildlife and icy snowscapes.

Castles Made of Snow (2017) - Documentary, Sport
Armchair skiers and snowboarders can watch the evolution of the thrilling Suzuki Nine Royals contest, staged on a breathtaking castle made of snow.

Jeremy Jones' Higher (2014) - Documentary, Sport
Join Big Mountain Rider of the Year winner Jeremy Jones as he dares to elevate the sport of snowboarding by taking on the Eastern Alaska Range.

RELATED: These movies are perfect for Valentine’s Day — and free to stream on Tubi