OAKLAND, Calif. - Some political and union leaders are concerned about the decision to let that cruise ship dock Monday in Oakland.

While Gov. Gavin Newsom said on Sunday that he’s doing everything possible to make sure the public is safe when the 3,500 people on the ship sails into the Port of Oakland, for many, that’s not enough to reduce worries.

“What is the state going to do to protect Oakland?” Oakland City Councilwoman Rebecca Kaplan asked. “We have an urgent need of hand-washing stations, to make sure everyone in our community, including the homeless are kept safe from this epidemic.”

Union port workers are also on edge, unsure if their services will be used in an area under their jurisdiction. And if so, what safety protocols will be in place? 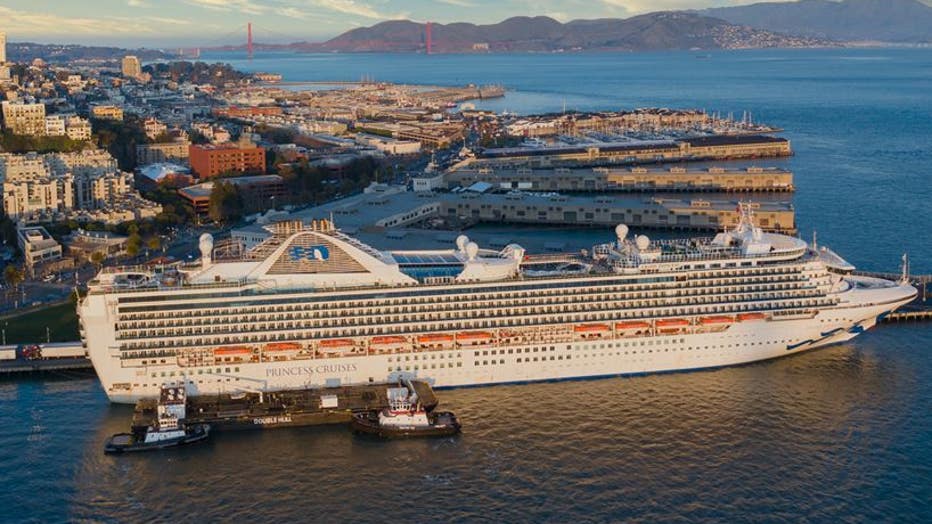 Princess cruise ship in San Francisco on Feb. 22, before officials discovered there were passengers with coronavirus on board.

Trent Willis, president of ILWU Local 10 told KTVU on Sunday that “if we in fact are going to be asked to provide labor for this vessel, we want to do it in the safest manner possible for our members.”

Keith Shaklin, president of ILWU Local 34  added that he wants to make sure that “whatever happens between the vessel and the politicians, that we don’t put nobody’s safety at risk.”

He said he wants to make sure everybody has the proper personal protective equipment to deal with the vessel and the proper training.

For city residents, and those that live close enough to see the port of controversy, mixed feelings on operations that could put others at risk.

Rohan Thompson of Alameda resident said he was “concerned.”

But he added: “From what I understand, the controls have been put in place to manage the ship that’s expected to dock in Oakland.”

Another person though took a more compassionate approach.

“We need to get those people off the ship. Something’s got to be done, as long as it’s handled correctly, I am cool with it.”

In a news conference on Sunday, Newsom said safety precautions are already being taken.

Passengers who require acute medical treatment and hospitalization will be taken to health care facilities in California. If passengers do not require acute medical care following health screenings, those who are California residents will go to a federally run isolation facility within the state, such as Travis Air Force Base in Fairfield and the Marine Corps Station Miramar near San Diego, for testing and isolation, while non-Californians will be flown by the federal government to facilities in other states, such as the Joint Base San Antonio Lackland in Texas or Dobbins Air Force Base in Georgia, Newsom said.

Newsom stressed that the passengers from out of state and other countries would be taken by shuttle to a seperate section of Oakland International Airport, away from the general flying public. They will fly on chartered planes.

As for the crew?

Princess cruise employees will be quarantined and treated aboard the ship, Newsom said. As soon as the passengers get off, the ship will leave Oakland and "remain elsewhere" for the duration of the crew's quarantine.

Princess cruise to dock in Oakland

Passenger describes feeling 'over the edge'