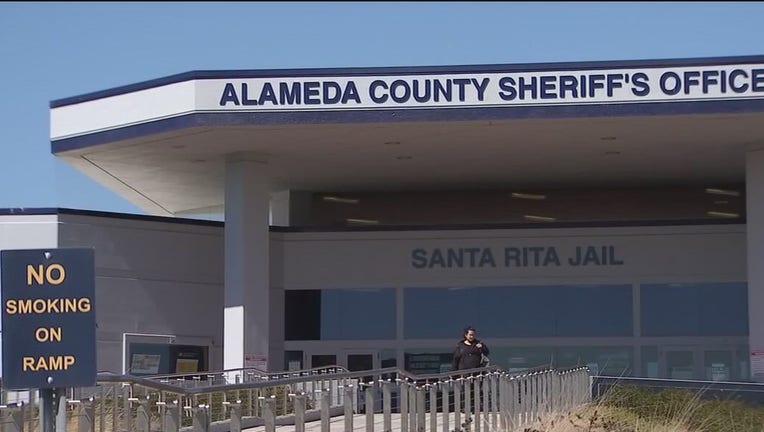 The Alameda County sheriff's office had to relieve 47 officers of their duties after an audit revealed they had "unsatisfactory" mental health evaluations.  (KTVU FOX 2)

OAKLAND, Calif. - A state agency has launched an inquiry into the employment of 47 Alameda County sheriff's deputies who were hired despite receiving unsuitable marks on their psychological exams, KTVU has learned.

Meagan Poulos, spokeswoman for the Commission on Peace Officer Standards and Training, said that POST consultants – mostly retired law enforcement officials – were sent to sheriff's headquarters this week to find out how this problem occurred, and how it is going to be rectified.

According to POST, it is a violation of state law to hire someone as a peace officer who is deemed unsuitable.

Candidates are given a multiple choice exam to determine the psychological fitness of a candidate to "protect public safety" and ensure that law enforcement hires are "free from any mental condition, including bias against race or ethnicity, gender, nationality, religion, disability or sexual orientation that might adversely affect" their exercise of power. The test also tries to ensure that the candidate is "capable of withstanding the psychological demands of the position."

The test assesses behaviors such as integrity, maturity and control, dependability, attention to detail, leadership, flexibility, teamwork and initiative, to name a few attributes. The test also seeks to uncover "counterproductive work behaviors," such as substance abuse, anxiety, depression and anger issues.

POST is a government agency that sets the minimum hiring and training standards to become a police officer in the state of California.

She said that her commission was taken aback when KTVU first reported on Monday that Sheriff Gregory Ahern had hired – and then relieved the 47 deputies of their law enforcement duties as a result of their unsatisfactory exams dating back to 2016.

As of Sept. 23, the deputies have had their guns and uniforms taken away, and have been reassigned to other jobs in the department, such as working as technicians in the courts, coroner's bureau, jail customer service or in the airport, to name a few positions.

The 47 deputies in Alameda County also received a "D" assessment, according to a letter obtained by KTVU.

"We were told that a D was acceptable and we have that communication from POST," said Lt. Ray Kelly, the sheriff's spokesman. He reiterated that the sheriff has had "previous communication from POST in person, writing and on voicemail" that they were allowed to hire candidates despite getting an unsuitable evaluation or "Ds." He said he would love to provide that evidence but that county counsel has advised otherwise.

Poulos contested that assertion regarding the D. She said she never heard of a grading system and assumed that might be an internal system.

The audit was prompted by the actions of former deputy Devin Williams Jr, 24, who was charged with killing a husband and wife -- with whom he was having an affair – in their Dublin home on Sept. 7.

Multiple sources have told KTVU that Williams had failed his psych exam and that county counsel likely forced the review of how many other deputies might not have passed. The sheriff's office has not confirmed this. At a news conference following the double homicide, Kelly told reporters that Williams' record before getting hired was "immaculate."

As for what's next, Ahern wrote the deputies that his office intends to schedule a second exam in the hopes that the employees can be reclassified as "suitable" and "return to full duty status."

The test might occur in the next couple of months, and Kelly said that it will be conducted by a POST-certified psychologist to alleviate any fear of public mistrust.

Two of the 47 deputies have already taken a re-test and passed as suitable, Kelly said, and there will be "more in the coming days."

The process and the speed of the new tests was not immediately explained.

The law indeed allows a candidate to get a second opinion -- but that second opinion has to be administered before the person gets hired - not after, Poulos said.

In this case, Ahern had already hired the deputies.

Poulos said that she wasn't sure what would happen next because to her knowledge, this has never happened before.

Poulos acknowledged that POST has no real punitive powers and cannot issue charges or fines.

Kelly said that 30 of the deputies work at Santa Rita Jail and the other 17 work in various other positions.

Sources provided an unofficial list of names of more than 20 deputies who got the letter, showing that at least six work at the Eden Substation Patrol in San Leandro.

A preliminary search of court records and Google showed no immediate red flags of any deputy's past.

Several of the deputies' LinkedIn pages show that they recently graduated from college with degrees in criminal justice and are likely in their early 20s.

Kelly confirmed that in many of the cases, the deputies who received the letter are young and inexperienced for the horrors of the job. And he also said that the sheriff's office has a dire need to hire more employees to fulfill a legal consent decree that mandates better treatment of mentally fragile inmates at Santa Rita Jail. It is also well-documented that there is a national staffing shortage to fill empty law enforcement jobs.

Meanwhile, Alameda County Supervisor Keith Carson told KTVU that the supervisors had a closed-door meeting on Tuesday with Undersheriff Richard Lucia, in advance of the litigation they assume will inevitably take place because of the unsuitable hires.

"All of us are extremely concerned," Carson said. "We are not happy that this happened at all."

Carson added that he has not spoken to Ahern directly and all the supervisors were shocked when they learned of the situation when KTVU broke the news earlier this week.

"We did not get a heads-up," Carson said. "We were caught off guard."