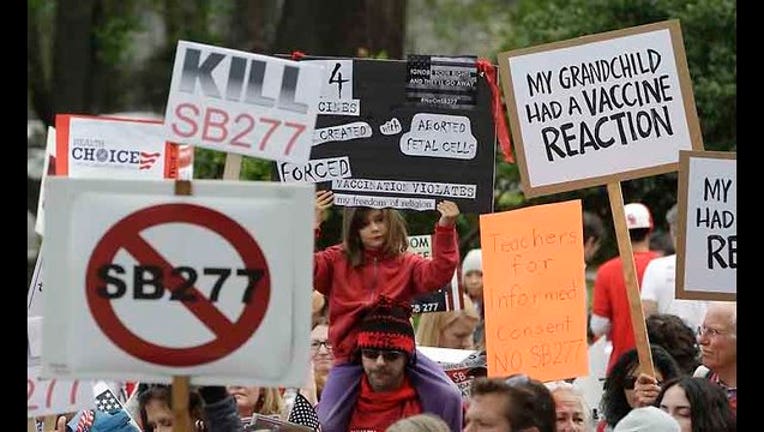 SACRAMENTO, Calif. (AP) — A California bill that would sharply limit vaccination waivers after a measles outbreak at Disneyland has generated such an acidic debate that the proposal's author was under added security this week.

Authorities wouldn't specify the extra protections around state Sen. Richard Pan on Friday, but the level of anger over the measure has been clear.

Opponents have flooded the Capitol to stand up for parental rights, and images that compare Pan to Adolf Hitler have circulated online.

"Unfortunately, there is a sub-segment of the group that seems to want to engage in vitriol and intimidation and bullying in order to get their way," said Pan, a Democratic pediatrician from Sacramento.

Sen. Carol Liu, chair of the Education Committee, which will hear the bill next week, said through a spokesman that the proposal has generated more calls to her office than any other this year, including measures on immigration, doctor-assisted suicide and police shootings.

"It literally started the first day it was in the news, and it never stopped," said Robert Oaks, Liu's spokesman.

Pan said he introduced the measure, Senate Bill 277, to limit inoculation waivers after a measles outbreak in December that started at Disneyland and sickened more than 100 people across the U.S. and in Mexico.

It would prevent parents from sending unvaccinated kids to school using waivers for religious or personal beliefs. Exemptions originally would have been available only for children with health problems, but they were recently expanded to include homeschoolers.

The plan is early in the legislative process, but it has high-level support. Senate Leader Kevin de Leon, a Los Angeles Democrat, has signed on as a co-author. If it becomes law, California would join Mississippi and West Virginia as the only states with such strict vaccine requirements.

Critics, however, have turned out in force. Before the bill's first legislative hearing this week, hundreds of opponents attended a rally that featured an appearance from Robert F. Kennedy Jr., who has said the number of children injured by vaccines amounts to "a holocaust." During the hearing, an opponent threated to ask God to curse legislative supporters.

Vaccination foes have focused on potential risk factors, saying shots could be tainted or otherwise dangerous. They characterized the bill as an outrageous government overreach. They also worry about the drugs' links to autism and other developmental diseases, even as the medical community says such claims have been scientifically disproved.

Similar plans have been proposed and have failed in other states, including Washington and Oregon, where lawmakers received similar pushback.

"Some of it got pretty ugly," said Paige Spence, aide to Oregon Democratic Sen. Elizabeth Steiner Hayward. "And I did my best to shield her from seeing any of it."

Many opponents have taken a more civil tone.

Brian Stenzler, president of the California Chiropractic Association, has testified against the bill and condemned the threats against lawmakers as unacceptable. But even though opposition leaders are focused the merits of the legislation, there are some things they can't control, he said.

"It's kind of like a mother bear," he said. "You come near a cub, that mother will do anything they have to do."

"Right now," he added, "these parents are running on pure emotion and pure adrenaline."