On Wednesday, Santa Clara Valley Water District released troubling new images of how severe the drought is. Water officials said its 10 reservoirs are at historic lows. On average, they’re now at 12.5% of capacity.

SACRAMENTO, Calif. - California's reservoirs are so low from a historic drought that regulators warned Thursday it's possible the state's water agencies could get nothing from them next year, a frightening possibility that could force mandatory restrictions for residents.

California has a system of giant lakes called reservoirs that store water during the state's rainy and snowy winter months. Most of the water comes from snow that melts in the Sierra Nevada mountains and fills rivers and streams in the spring.

Regulators then release the water during the dry summer months for drinking, farming and environmental purposes — including keeping streams cold enough for endangered species of salmon to spawn.

In a battle over water rights, San Francisco and several Central Valley irrigation districts with water rights dating back more than a century are suing the state for forcing water restrictions, as California deals with a worsening drought.

This year, unusually hot, dry conditions caused nearly 80% of that water to either evaporate or be absorbed into the parched soil. It caught state officials by surprise as California now enters the rainy season with reservoirs at their lowest level ever.

"Nothing in our historic record suggested the possibility of essentially that snow disappearing into the soils and up into the atmosphere at the level that it did," California Natural Resources Secretary Wade Crowfoot said. "These climate changes are coming fast and furious."

Last year's winter was the 10th driest since 1950. Still, California's reservoirs were at 93% capacity at the beginning of the 2020 rainy season. California won't have that cushion heading into this winter. It's impossible to predict with accuracy how much rain and snow California will get this winter. But if it's anything like the last two winters, there will be even bigger problems.

Nicasio Reservoir is located in the Nicasio Valley region of Marin County. As of Wednesday, September 8, 2021, the Marin Municipal Water District says their five reservoirs are currently have 28,982 acre-feet of water in them. Compared to the average for this date, 2021 levels are at 49.90 percent of normal. The district has a total capacity of 58,088 acre-feet.

"We are collecting information from the agencies we provide water to about what their human health and safety needs are in the event that they get no allocation from the State Water Project," Department of Water Resources Director Karla Nemeth said.

A spokesman for the State Association of Water Agencies said they could not comment on Thursday because their executive director was traveling and unavailable.

Despite the severity of the drought, Gov. Gavin Newsom has not declared a statewide emergency. Instead, he has declared emergencies in 50 of the state's 58 counties, an approach his administration says is driven by lessons learned from the most recent drought when the state imposed restrictions statewide.

The city of Santa Clara declared drought emergency and put restrictions on water use.

"(Water agencies) have explained to us that one size fits all mandates from Sacramento sometimes have unintended consequences," Crowfoot said.

Still, California's water supplies are in poor condition heading into the rainy season. In July, Newsom asked everyone to voluntarily reduce their water use by 15%. But in the first three weeks after that request, Californians reduced their water usage by just 1.8%, state officials said.

In a call with reporters on Thursday, Crowfoot said mandatory water restrictions "need to be on the table." But he indicated those restrictions likely wouldn't come until state officials have a better idea of how much water the state will get this winter.

Amid a worsening drought, the Bay Area's water supplies are in good shape

The Hetch Hetchy Valley and Reservoir in Yosemite National Park, a system that is operated by the San Francisco Public Utilities Commission, is nearly at capacity. That's great news for much of the Bay Area, as residents are unlikely to face water usage restrictions this year. KTVU Meteorologist Mark Tomayo reports.

"This winter will be determinative in terms of what additional actions we need to take on conservation," Crowfoot said. "We'll be watching." 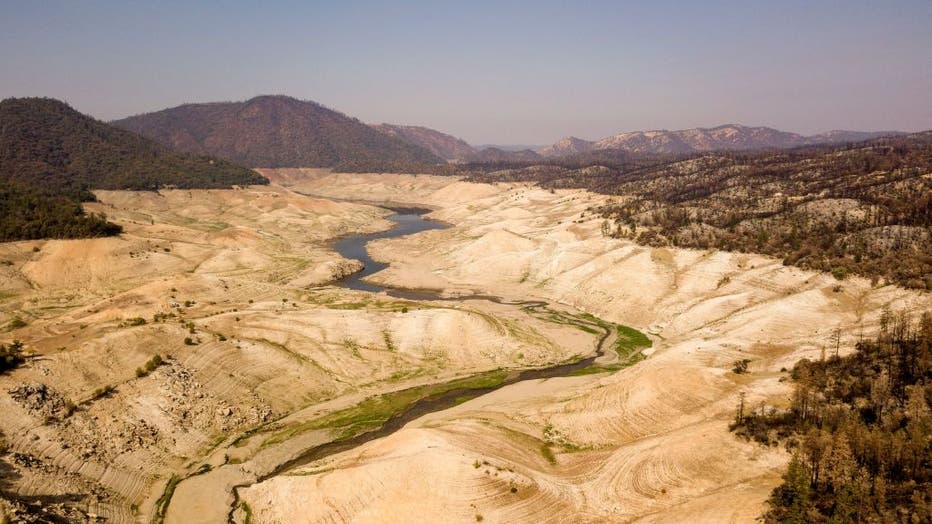 A nearly empty section of Lake Oroville is seen from above in Oroville, California on September 5, 2021. - Lake Oroville is currently at 23% of its capacity and is suffering from extreme levels of drought. Much of California in the western US is curr