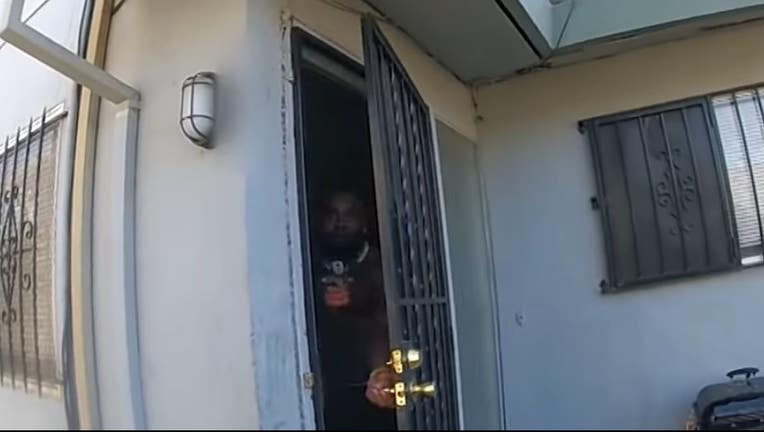 A suspect in a domestic disturbance call opens fire on Stockton Police Officer Jimmy Inn, killing him. The suspect was also shot and killed by police during this incident.

STOCKTON, Calif. - Stockton Police Department on Tuesday released police-worn body camera video footage from an incident last month in which one of their officers was shot and killed by a suspect. The suspect was also shot and killed by police during the domestic dispute.

The videos show both responding officers' camera viewpoints from the May 11 incident. Stockton Police Chief Eric Jones said the video is being released out of the department's "principles of transparency." 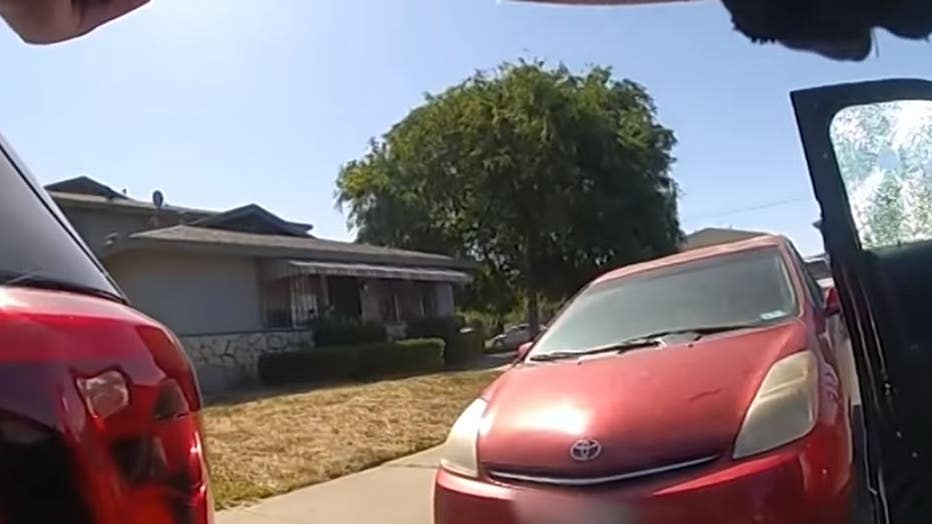 The video shows Officer Jimmy Inn, 30, responding to the disturbance at a home. Callers reported hearing screaming, seeing a woman with a ripped shirt who was bleeding.

Officer Inn knocked on the home's security door and stood to the side. A voice from inside said, "Hey police." The door abruptly opens and the suspect, later identified as Lance Lowe, 30, opens fire on Officer Inn, shooting him multiple times.

A second officer, Pancho Freer, arrives at the scene. Police said he heard gunshots and saw Lowe standing over Officer Inn. Lowe then fired shots at Freer, striking his patrol car, according to police. Freer returned fire from his car.

Freer is captured on video saying, "Shots fired. My partner is down. Jimmy, you alright?" and "Jimmy stay with me!"

Lowe goes inside the house and returns outside holding his eight-year-old son and then begins to strangle him.

Lowe refused to comply with the officer's commands to let the child go. "I don't want to kill you," Freer said to Lowe. A member of the community tackles Lowe to the ground. Officer Freer then opens fire on Lowe, firing his weapon multiple times. The man who tackled Lowe, immediately backs up and begins to say, "Hey, watch!" to the officer, but does not complete his sentence.

Police said the boy was medically cleared and released to his biological mother. Upon a search of Lowe's residence, a firearm was found inside.

Multiple agencies are investigating this shooting, along with the police department, because it involved an officer. Those agencies include; San Joaquin County's Bureau of Investigation, California Department of Justice and the San Joaquin County Medical Examiner's Office.

Police also released the 911 calls from this incident.