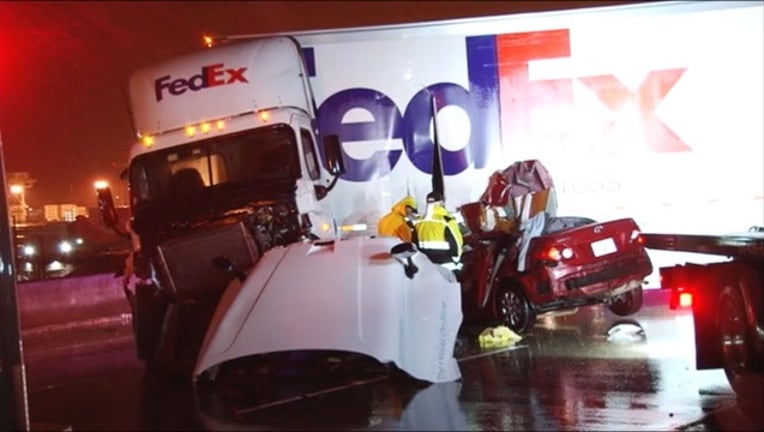 The storm struck the Bay Area overnight and by the early morning Thursday commute, roads were slick, flooding was appearing in pockets across the region and traffic accidents were growing in number.

One of the biggest accidents was reported just after 1:40 a.m. on southbound  Interstate Highway 880 just south of Seventh Street in Oakland after a big-rig jackknifed in what became a multi-vehicle accident. Lanes were closed for about three hours.

In San Jose, there was nearly a foot of standing water on the connector from northbound I-280 to northbound Highway 87. Nearby, a four-car crash occurred at US Highway 101 north of Highway 87.

In Pleasanton, a produce truck overturned at Bernal Avenue and Interstate 680, delaying traffic while crews worked on righting the rig.

KTVU's Steve Paulson says we'll see rain through Saturday. He says it could be a rough evening commute but it will be hit or miss as the storm moves through the Bay Area.

The storm will bring strong wind gusts with winds of 30-40 mph.

It will be colder tomorrow and we could see snow at low elevations including Mount Hamilton and Mount Diablo.