Thousands of people are still stranded due to the Southwest Airlines flight cancelations. Hotels and rental car stores near the San Jose airport say they’re doing what they can to accommodate people.

SAN JOSE, Calif. - Thousands of people are still stranded due to the Southwest Airlines flight cancellations. Hotels and rental car stores near the San Jose airport say they’re doing what they can to accommodate people.

The crowds we saw Monday are gone, but some people Tuesday say they’re trying to get their money back or a voucher for canceled flights.

They’re also staying with relatives, at hotels and renting cars to get to places here in the western region.

"Now they’re saying the flight’s back on, but I’ve been on the phone for hours and hours trying to reach Southwest, so I just came down here to the airport to try and rectify the situation," said Janice Hillesland, who lives in Washington.

Frustrations are still running high as people try to get to their destinations.

"I blame Southwest. Sorry Southwest for putting them out there, but you know, whatever they did, it messed up the whole situation. We’ve been stranded here in the rain. My pants are wet. I had to change shoes and everything. And luckily, we just found a car that’s going to be able to take us to El Paso," said Aldo Ceniceros of El Paso. 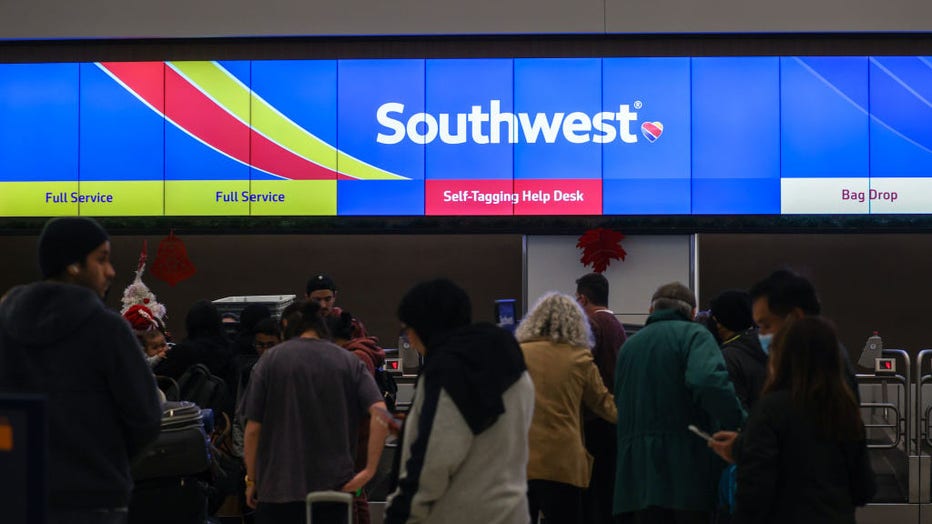 "Between on the phone and standing in line, it’s been about 10 to 12 hours. I just don’t want to waste any more time. So I’ll wait until the mess clears up a little bit," said Steve Adler from San Diego.

SEE ALSO: Flight canceled? Can you get a refund? Here's how to find out if you're owed money

Both Avis and Budget Rental Car at the San Jose airport told us that they were still renting cars Tuesday night, but National and Hertz said they were out of cars to rent. San Jose’s airport has canceled 78% of its flights this week, making it one of the highest cancelation rates in the country.

"We’re doing everything we can to return to a normal operation. And please also hear that I am truly sorry," said Bob Jordan, Southwest Airlines CEO.

By Tuesday afternoon, Southwest accounted for 2,599 of 3,050 flights canceled by all airlines. Southwest Airlines CEO Bob Jordan explained why so many flights were grounded.

"With our large fleet of airplanes and flight crews out of position in dozens of locations, and after days of trying to operate as much of our full schedule across the busy holiday weekend, we reached a decision point, to significantly reduce our flying to catch up," Jordan said.

The Southwest travel disruption page says anyone traveling through Jan. 2 can rebook their flight sans fees within 30 days.

You can also request a refund online or in person at the airport.