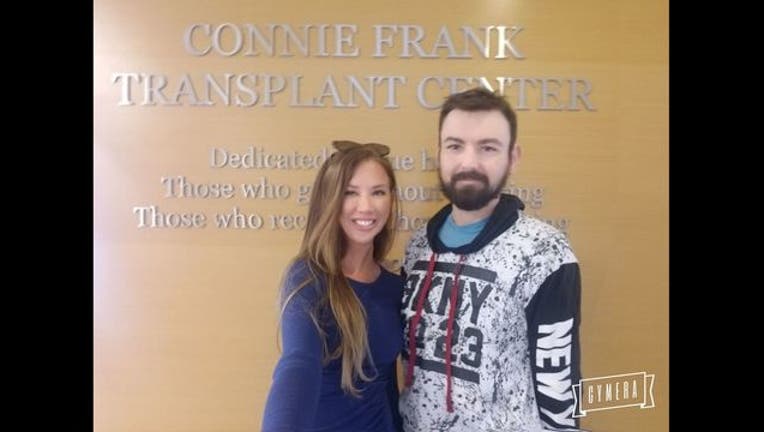 Jessica Morris is donating her kidney to David Nicherie after answering his ad on Craigslist.

The resolution had nothing to do with eating better, exercising more or dropping a few pounds.

“I knew that (donating a kidney) is what I wanted to do. I had no interest in working out,” said Morris with a quick chuckle.

Hundreds of miles away from Morris, a 29-year-old Oakland man named David Nicherie was dying.

A chronic inflammatory bowel disease and an unrelated auto immune disease had attacked his kidneys.

They said it would be at least 15 years.

Dozens of potential donors, including his father and sisters, had offered their own kidneys.

They were rejected for one reason or another.

Nicherie had been on dialysis for five years and the grueling treatment had left him exhausted and hopeless.

He knew he was dying, but he wanted to live.

So, he went for the long shot.

He posted an ad in the community section of Craigslist San Francisco and Las Vegas, where he’d lived before moving to Oakland.

“It went something like this: 'hello my name is David. I have kidney failure and I’m looking for a kidney donor,'’’ Nicherie recalled.

Most wanted money, thousands of dollars to even continue the conversation.

People from overseas said they’d help him in exchange for assistance with immigrating to the United States.

A few seemed sincere, but then never responded to Nicherie’s follow-up emails.

Then came the email from Jessica Morris.

“I was 100 percent skeptical,’’ Nicherie recalled. “I assumed it was a scam. She was very to the point when I started talking to her more, but I had already been burned.”

Despite living in Orange County, Morris offered her kidney to Nicherie.

“I’ve actually wanted to do it for a very long time,’’ said Morris said, who had searched scores of donor sites before Nicherie’s Craigslist ad popped up on her Facebook page.

“I don’t understand why more people don’t donate,’’ she said.

Right away, her friends and family tried to talk her out of it.

But she was steadfast about her decision.

On Tuesday afternoon, after months of preparations, a bevy of tests, more lab work than she cares to recall, countless X-rays, and a psychiatric evaluation, surgeons at UCSF will remove Morris’ left kidney and transfer it to Nicherie.

Although kidney transplant surgery carries a risk of significant complications, statistics from the Mayo Clinic show that the kidney failure rate is low: 3 percent at one year and 14 percent at five years after the transplant.

For Morris, the donation surgery involves the same level of risk as “any other major surgery,” according to the American Transplant Foundation.

And although there is no national systematic long-term data on the risks to the donor, the American Transplant Foundation says that based on the limited information currently available, overall risks are “considered to be low.”

Morris said she isn't worried. "I think it's awesome to be able to help someone,'' she said.

And to make good on that New Year's resolution.