LOS ANGELES - Authorities believe that a school shooting was averted when they arrested a student in possession of an AR-15 rifle, ammunition, along with a drawing of the school layout and a list believed to be of intended victims.

Los Angeles County Sheriff's deputies responded to a call on Thursday reporting that a 13-year-old male student had threatened to shoot other students and staff at Ánimo Mae Jemison Charter Middle School on Friday.

Sheriff's officials say a 19-year-old man, who is a relative of the student, was also arrested on suspicion of possessing an unregistered firearm. He is being held in lieu of $35,000 bail.

Los Angeles County Sheriff Alex Villanueva said that the alleged threat was overheard by other students, who notified teachers about what they had heard. The school staff then alerted the sheriff's department.

“With all incidents like these, we ask Los Angeles County residents that if they see or hear something, to say something. In this case, the fact that people stepped forward and said what they heard, led to us to be able to prevent a tragedy today,” the sheriff said in a Friday afternoon press conference. 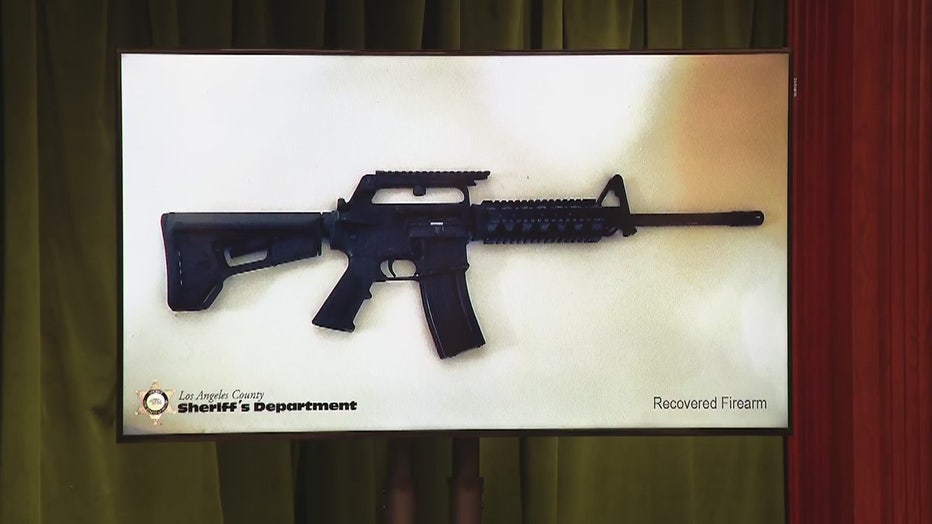 The investigation resulted in a search warrant where deputies seized an AR-15 rifle, approximately 100 rounds of ammunition, a rudimentary hand-drawn map of the school layout and a list, believed to be of intended targets, from the boy's home.

Investigators are now working to determine how the 13-year-old came into possession of the unregistered AR-15 rifle.

The student was expected to be charged with making criminal threats against the school.

13-year-old arrested after allegedly threatening to shoot up school

A 13-year-old boy was arrested after allegedly threatening to shoot up his middle school in South LA. Authorities found an AR-15 rifle along with a hand-drawn map of the school at the boy's home.

News of the arrest came just over a week after a 16-year-old student armed himself with a handgun, shot five students, two fatally, before shooting himself in the head in the quad of Saugus High School in Santa Clarita. That suspect died the following day.

"This incident and the recent tragedy at Saugus High School have understandably created anxiety and concerns regarding school safety," Los Angeles Unified School District Superintendent Austin Beutner said in a statement released Friday afternoon. "We are committed to the safety and well-being of our students and staff and will remain vigilant in providing a safe and welcoming learning environment for the students, families and communities we serve."