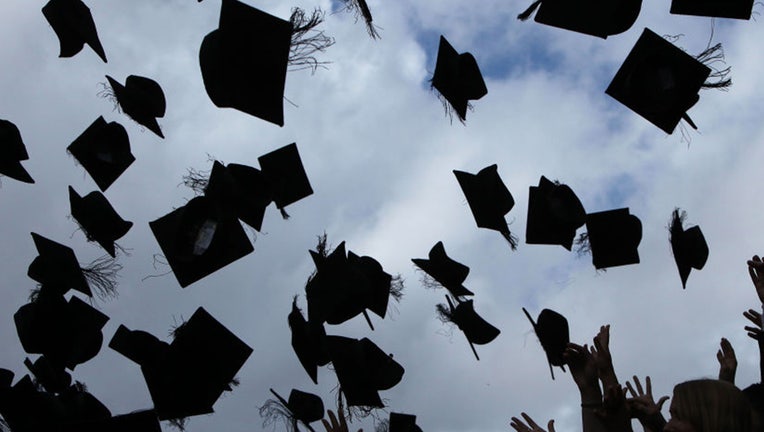 FILE - Students throw their mortarboards in the air during their graduation photograph. (Christopher Furlong/Getty Images)

Students from Wiley College in Marshall, Texas, were not only given their diplomas on May 7 but were gifted with complete student loan forgiveness after an anonymous donor paid off their debts.

During the commencement ceremony on Saturday, over 100 graduates were given the wonderful news by the college’s president and CEO, Dr. Herman J. Felton, Jr., according to a school news release.

The anonymous donor paid off about $300,000 in student loan debt.

"The anonymous gift sets graduates on a continued path to success and allows Wiley College to strengthen its commitment to providing an affordable exceptional education," the news release continued.

"Our commitment to our students goes beyond their time while they are enrolled. We are constantly communicating with donors to assist students in these ways so that they can begin their after-college experience with less debt. We are grateful for this anonymous donor who will assist the students in paying off their balances to Wiley College and help us achieve institutional goals of graduating our students with little to no debt," said Herman.

RELATED: Billionaire fulfills promise to pay off student loans for Morehouse Class of 2019

Wiley College worked to lower its tuition fees to accommodate students who may be struggling financially but the COVID-19 pandemic exacerbated their ability to keep up with their loans, according to the school.

"The announcement of cleared balances for graduates was a welcome surprise as students and parents were demonstrative in the audience when they heard the news," the news release added.

Wiley College was founded in 1873 and is a historically Black college, according to the school’s website.

This story was reported out of Los Angeles.