Does dark chocolate make us happy?

New research suggests that the relationship between a person’s happiness and their income doesn’t plateau around $75,000 a year, contrary to often-cited past research on the subject.

Instead, a study published last month found that emotional well-being continues to increase along with income above that threshold. This includes feeling better day-to-day and being more satisfied with life overall.

The research, published in the National Academy of Sciences journal, used data from more than 33,000 working U.S. adults, ages 18 to 65. The participants answered prompts in a smartphone app as part of the research project Track Your Happiness, which included questions like, "How do you feel right now?" and "Overall, how satisfied are you with your life?"

"It tells us what’s actually happening in people’s real lives as they live them, in millions of moments as they work and chat and eat and watch TV," said Matthew Killingsworth, study author and a senior fellow who studies human happiness at the University of Pennsylvania’s Wharton School.

The responses indicated that well-being rises linearly with income, "with an equally steep slope above $80,000 as below it," the study says. The authors said the results show that larger incomes "were robustly associated with greater well-being."

The study found that there was no dollar value at which money stopped mattering to a person’s well-being.

"Instead, higher incomes were associated with both feeling better moment-to-moment and being more satisfied with life overall," the authors wrote. 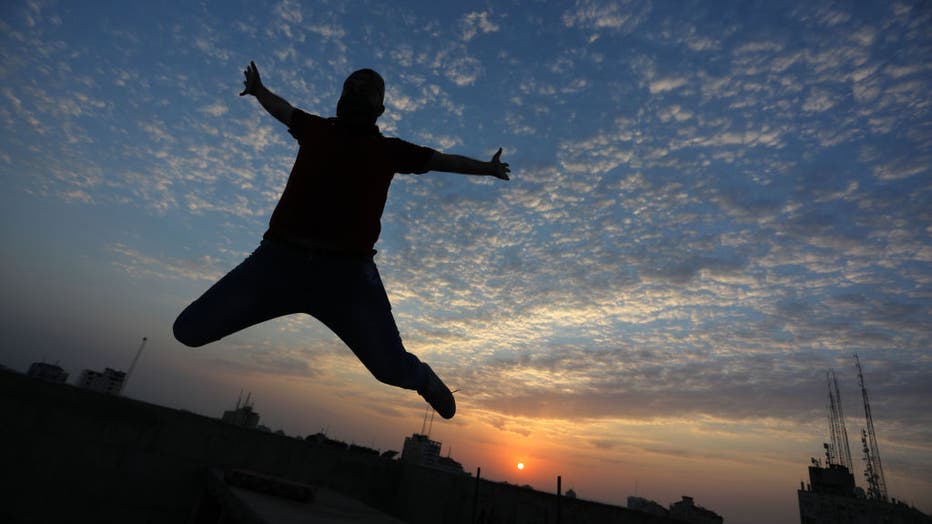 FILE - A person jumps during sunset in Gaza City on Sept. 20, 2020. (Photo by Majdi Fathi/NurPhoto via Getty Images)

In the study, "income" refers to a concept known as log(income). Instead of each dollar mattering the same to everyone, each dollar starts to matter less the more a person earns.

He added that higher earners seem to be happier because of an increased sense of control over life.

"When you have more money, you have more choices about how to live your life. You can likely see this in the pandemic. People living paycheck to paycheck who lose their job might need to take the first available job to stay afloat, even if it’s one they dislike," he said. "Across decisions big and small, having more money gives a person more choices and a greater sense of autonomy."

This research differed from an influential 2010 study, published in the same journal, which found that happiness and income are correlated — but only up to $75,000. In that study, happiness was measured in two ways: emotional well-being, which refers to the quality of a person’s everyday experience and feelings, and life evaluation, which refers to a person’s thoughts about his or her life over a longer period of time.

Study authors and Nobel Prize winners Daniel Kahneman and Angus Deaton found that emotional well-being did not improve beyond an income of approximately $75,000 a year, while life evaluation rose steadily with income.

Killingsworth and the team behind the new research wrote that most previous studies of the money-happiness link focused on overall satisfaction with life, using surveys to ask people how they remember feeling during some period in the past. But this relies on an individual’s ability to "accurately remember how they felt across the various moments of the past and then accurately integrate those memories into a single estimate," the study authors wrote.

"To directly measure experienced well-being requires collecting real-time data in in the midst of people’s everyday lives, and this has until recently been infeasible to do at scale," the authors added. This study was able to collect answers a few times each day in the app.

Ultimately, Killingworth said he doesn’t want the takeaway of the research to reinforce an idea that people should focus on more money to be happy.

"If anything, people probably overemphasize money when they think about how well their life is going," Killingsworth said. "Yes, this is a factor that might matter in a way that we didn’t fully realize before, but it’s just one of many that people can control and ultimately, it’s not one I’m terribly concerned people are undervaluing."

Research has shown many other factors besides income can contribute to one’s own happiness, including close relationships. About half of a person’s happiness level is based on genes, according to Harvard University — and as much as 40% of happiness comes from the choices they make.