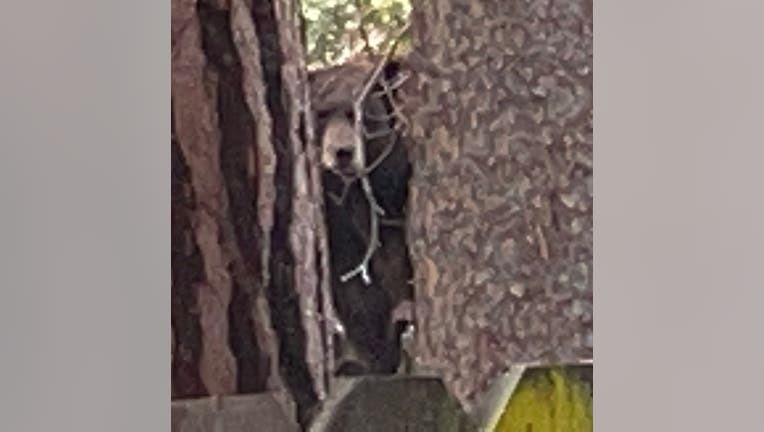 A Tahoe-area bear rescue group said it was called to a home on Tuesday, April 19, 2022, where they found a mother bear and four cubs had spent their winter hibernating in a crawlspace of the home. The group shared this photo of the mama bear after th (BEAR League )

TAHOE, Calif. - A South Lake Tahoe family was surprised to learn last week that they’d been hosting a family of bears at their home since December.

Local bear advocacy and rescue group BEAR League said it was called to a home, where residents reported they’d been hearing strange noises for months.

In a Facebook post, the group wrote that the residents "thought they heard some odd rumbling, snoring-like noises but ignored it because it simply didn't make sense...and the neighbors said they were imagining it because they didn't hear anything."

But finally last Tuesday, the residents could deny the sounds no more, as the source of those rumblings revealed itself.

SEE ALSO: Lake Tahoe bear activity is on the rise after the Caldor Fire

A family of five bears decided hibernation time was over and was getting ready to leave their accommodations, located under their hosts’ home.

BEAR League volunteers arrived to speed up the "check-out" process. They crawled under the home and made a lot of noises to "encourage" the family to get moving.

"They were just waking up," Bryant said. "We got the mother out, and she called to the babies, and they came,'' she added.

Everyone was surprised to see not only the mother emerge, but a line of cubs follow.

"It was quite the scene to then watch the four yearling cubs emerge from the opening and join together on the other side of the fence to venture forth into 2022," BEAR League shared.

Bryant said the mama bear was well known by her group and had been taking care of not only her own three cubs but had adopted an orphan cub that was about the same age as her babies.

"In fall, one of the other mothers was killed on the highway and her baby was orphaned, and this mother took him in and raised him with her own," Bryant said adding, "So they all hibernated together."

The group said last December, "When it came time to go to sleep for the winter she found a house with an unsecured crawl space opening and ushered all the kids inside and told them to Be Quiet and Go to Sleep."

They did just that, and remained asleep through the hibernation season. The cubs were estimated to be around 14 months old now.

The group said its volunteers were trained for these situations, as it's extremely common for bears to settle under homes to hibernate. Bryant said her group gets roughly 100-150 calls per winter from residents reporting sleeping bears under their homes. Founded in 1998, BEAR league said its mission was to work with the community to keep "bears safe and wild in their natural habitat."

Bryant said the family of bears was doing well. The cubs were expected to stay with their mother until June when they’ll venture out into the world on their own.