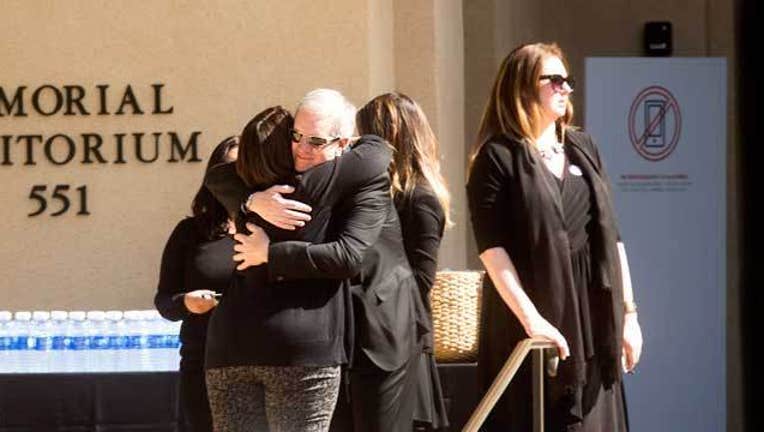 Mourners emerged from the ceremony held in an auditorium at Stanford University teary-eyed and wearing Minnesota Vikings paraphernalia to commemorate the favorite NFL team of the Minneapolis native.

The 47-year-old Goldberg died Friday while on a family vacation at a villa near Puerto Vallarta, Mexico. He slipped while exercising on a treadmill in the villa's gym and struck his head, Mexican officials said.

President Barack Obama extended his sympathies in a post on Facebook this week, joining a number of well-known Silicon Valley figures including Facebook CEO Mark Zuckerberg, a close friend of both Goldberg and Sandberg.

"His skills as an entrepreneur created opportunity for many; his love for his family was a joy to behold, and his example as a husband and father was something we could all learn from," Obama wrote on the White House Facebook page. The message drew online thanks from Sandberg, who described her relationship with Goldberg as a supportive, equal partnership in her 2013 book "Lean In," about the challenges faced by working women.

Goldberg was staying in Mexico with family at an independently owned villa called Palmasola, which features a gym. Villa guests have privileges at the nearby Four Seasons resort at Punta Mita, about 30 miles from Puerto Vallarta, but the villa is not owned or managed by the hotel chain.

Goldberg never entered the main gym at the Four Seasons, which keeps a record of all users, said resort manager John O'Sullivan.

Authorities in the Mexican state of Nayarit, where the villa is located, said an autopsy had ruled out foul play in Goldberg's death. They noted he suffered a blunt-force injury and a cut on the head but there was no sign of struggle.

After the service ended at midday, mourners exchanged hugs outside the Spanish-style building. Reporters were not allowed inside during the service.

A genial bear of a man, Goldberg was often introduced in national media appearances as Sandberg's husband after her book helped spur public dialogue about working women and the need for men to support their spouses by sharing duties at home.

But to many in Silicon Valley, Goldberg was also known as an entrepreneur, investor and mentor who generously shared business advice. He was CEO of SurveyMonkey, a commercial service for conducting online polls, and is credited with overseeing its growth to a current valuation of $2 billion.

"He was a perfect cross between a teddy bear and a tiger," former Yahoo President Sue Decker wrote on a tribute page for Goldberg. Decker met Goldberg when they both were Yahoo executives.

Other tributes to Goldberg described his low-key humor, love for the Vikings and enthusiasm for playing poker.

Goldberg and Sandberg married in 2004; they have two children. He and Sandberg had frequently spoken about their efforts to share household duties and spend time with their children.

Sandberg also has credited Goldberg with supporting her executive career at Google and Facebook. Stock grants from those jobs have made her a billionaire, and as Facebook's chief operating officer, she is one of Silicon Valley's most powerful female executives.

Goldberg was a former executive at Capitol Records, where he helped develop a program to sell CDs at Starbucks outlets, before he started Launch Media to publish a digital music magazine. He later ran music programs for Yahoo and worked at Benchmark Capital, a Silicon Valley venture firm.

Sandberg is a director of the Walt Disney Co., which moved up its previously scheduled earnings report to Tuesday morning so executives could attend the service.