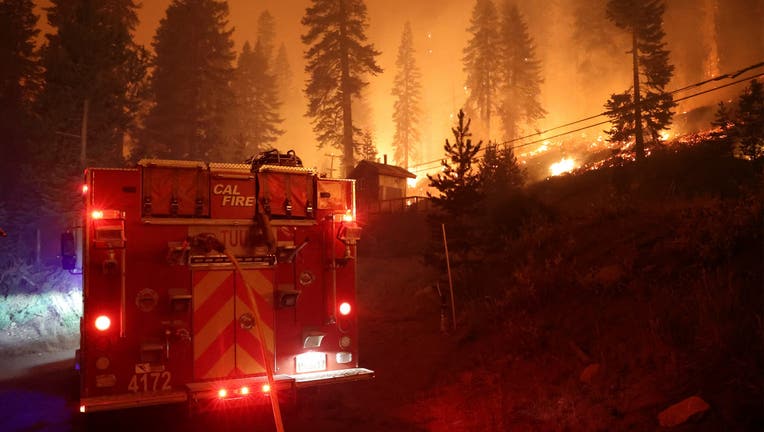 On Aug. 14 at about sundown and just as the night sky was settling in, there were early signs of the Caldor Fire south of the community of Grizzly Flats in El Dorado County.

Clouds of black heavy smoke began filling the air and covering the forest. Red and dark orange flames peeked through large portions of the columned smoke as more acres began to burn and char.

The beginnings of the blaze, which grew 18,000 to 22,000 acres daily for the first three days, were captured on ALERTWildfire cameras that are state-of-the-art pan tilt zoom cameras that monitor wildfire activity across California.

First responders throughout California have adopted ALERTWildfire cameras and Zonehaven, an evacuation tool, to help prevent the spread of dangerous wildfires and limit the number of lives lost to the fires each year.

"Like all fires, there's a period of time where there's extreme fire growth," said Graham Kent, director of the Nevada Seismological Laboratory at University of Nevada, Reno and one of the creators of the ALERTWildfire system. "When that happened, it was very apparent on the cameras."

Kent said more than 900 cameras have been set up throughout the state to allow fire crews to confirm, locate and scale fire resources before even leaving the fire station.

"In a few minutes they [first responders] can understand what's there, what's not ... send less resources or send a lot more," Kent said.

Diana Swart, spokesperson for Cal Fire's Amador-El Dorado County unit, said emergency dispatchers from her unit, who answer and respond to 911 calls, have used the cameras to help determine which direction smoke is moving and relay the information to ground and air support responding to fires. 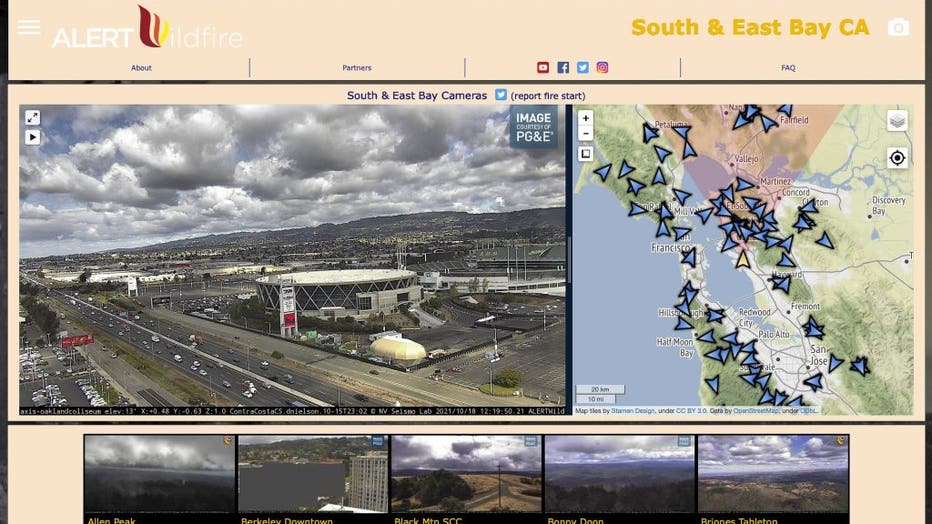 "This can help with finding appropriate and safe access areas to the fire," Swart said.

Kent said the cameras were of great use to all of the agencies assisting in the Caldor Fire because everyone was able to receive the same information regarding the fire, which allowed responders to have at least some knowledge before battling it.

Despite the cameras successfully aiding first responders and emergency units during wildfires such as the Lilac Fire in San Diego County in 2017, the CZU Lightning Complex fires in San Mateo and Santa Cruz counties in 2020, the Tamarack Fire south of Lake Tahoe this year and many others, the cameras still have major limitations.

For example, Kent said that at some point during the Caldor Fire, the smoke conditions were heavy due to the magnitude of the fire, which meant the cameras couldn't see through the smoke, leaving fire personnel with limited information on the fire conditions.

"When that fire spilled into the Tahoe basin, it was super smoky," Kent said. "Most of the other cameras certainly during the day and even at night were having a hard time seeing the fire."

Additionally, since the cameras are connected to a network system, there have been instances where the software malfunctions.

Kent said there was a day when a problem with the ALERTWildfire system caused the servers to be down for a brief time. However, after the issue was resolved, there was a fire spotted by the cameras that was fast-moving.

"It was great to have those cameras up and running but that was a close call," Kent said.

Another drawback with the cameras is the cost if cameras get damaged or burned during wildfires.

According to Kent, the camera itself costs about $3,000 but replacing the infrastructure such as the poles that hold up the camera, towers that help provide wireless internet service, wiring, and various other equipment to keep the cameras running can cost upwards of $50,000 to $60,000.

After first responders have realized that a wildfire is moving quickly and there isn't a way to impede its destructive path, they are tasked with evacuating people in a matter of minutes or seconds. 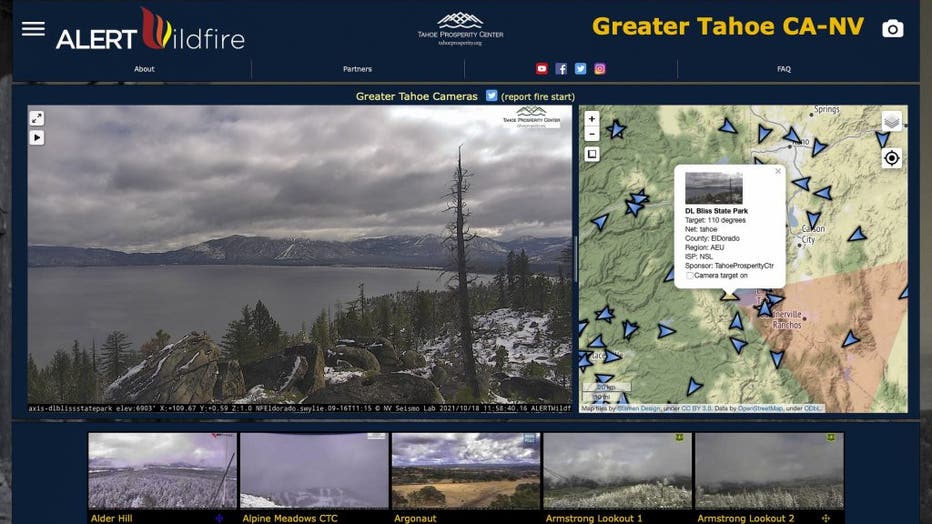 Steve Sickler, head of field operations for Zonehaven, a program that helps first responders communicate evacuation plans to the public, said in earlier times when a fire got out of control, authorities would have to gather and draw on a paper map the areas needing evacuation and then relay their decisions to the media via news releases.

"They would pull out a map and quickly determine who they are going to need to evacuate and then figure out where the fire is going, wind-wise," Sickler said. "Then they'd hand over the map to someone who is going to communicate it to the public."

Now, some counties have started implementing Zonehaven, which sends out real-time evacuation routes and information to first responders and people in pre-designated zones when a disaster emerges.

Residents from counties that are using Zonehaven can visit community.zonehaven.com to find what zone they reside in, see if their area is under evacuation, and the reasons why.

"First responders and agencies have a different view of the map," Cox said. "They can look at where the critical facilities are, where our chokepoints are for evacuation routes, and where our vulnerable and elderly populations might be."

Cox said by having predesignated evacuation zones, all emergency agencies and personnel can make adjustments to the map in a timely manner and notify the public of any new information in seconds.

"What we see with Zonehaven is our time to actually get the information to the public is greatly reduced, which is a good thing," Cox said. "The time we call for an evacuation to the moment it hits the public view is almost instantaneous now."

Zonehaven has facilitated evacuations in multiple counties and jurisdictions in a timely manner, limiting injuries and death caused by fast-moving wildfires, according to Cal Fire and Zonehaven officials.

According to Sickler, more than 2,000 people were saved in the Beckwourth Complex fire and the service was used during last year's CZU Lightning Complex fires that burned in Santa Cruz and San Mateo counties to evacuate 70,000 people in five days.

Officials say it will still take time for more residents to become familiar with the tool and learn about their zone in case a fire or disaster occurs.

"We have really recognized that when a big fire breaks out that we can't stop, what we want to do is get people out of harm's way," Cox said. "There's no substitute for leaving early."

The cost of Zonehaven varies depending on the size of a county, so it can be challenging for counties to find a way to pay for it, Sickler said.

For example, Alameda County gets consistent funding for Zonehaven from the Federal Emergency Management Agency. However, counties like Napa have to rely on inconsistent non-profit funding from the Gordon and Betty Moore Foundation and the Napa Valley Community Foundation.

Sicker explained that counties have different funding methods for a variety of reasons: Some prefer to use grants and non-profit funding whenever possible to preserve their revenue sources for other uses, and some counties set their budgets in advance before realizing that Zonehaven is an option for their county.

"Right now, they [counties] are setting their 2022-2023 fiscal budgets, which begins July 1st, 2022," Sickler said. "So, if a county wants Zonehaven now, they don't have it in the budget since many didn't know about us a year ago when they set their budget for this year."

Despite Zonehaven being useful, COVID-19 depleted revenues for many counties which doesn't leave them with extra funds to pay for the new firefighting tool, Sickler said.