SALT LAKE CITY - Fierce, strong, and inspiring. Those have been words repeatedly used to describe 17-year-old Sarah Frei, a Utah teenager, who tragically lost both of her legs when an alleged drunk driver hit her in a head-on collision over the summer. And it’s been her fighting spirit that has lifted up people across the country and around the world, as they have followed her story on social media. 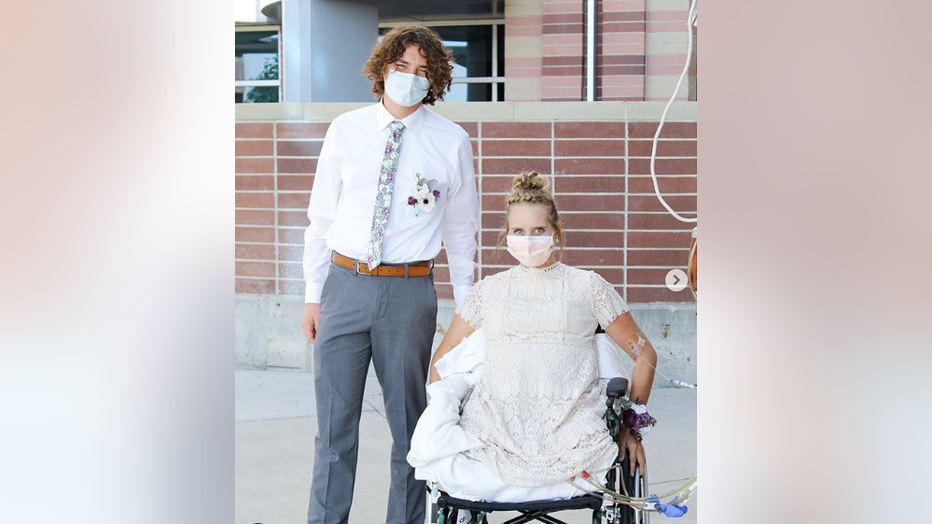 17-year-old Sarah Frei lost both of her legs after a head on collision on July 30, 2020. A photo of her going to 'virtual' homecoming on Sept. 12 went viral.  (Amy Frei/Instagram @strong.like.sarah )

On Sept. 12, a stunning photo of the teen attending homecoming went viral as it captured the hearts of many who marveled over the image of Frei all dressed up next to her date, less than two months after the accident that changed her life.

“Sarah had a wonderful time at her senior homecoming dance!!” said a post on Instagram, as it detailed the collaboration from hospital staff to get her ready for the special night. 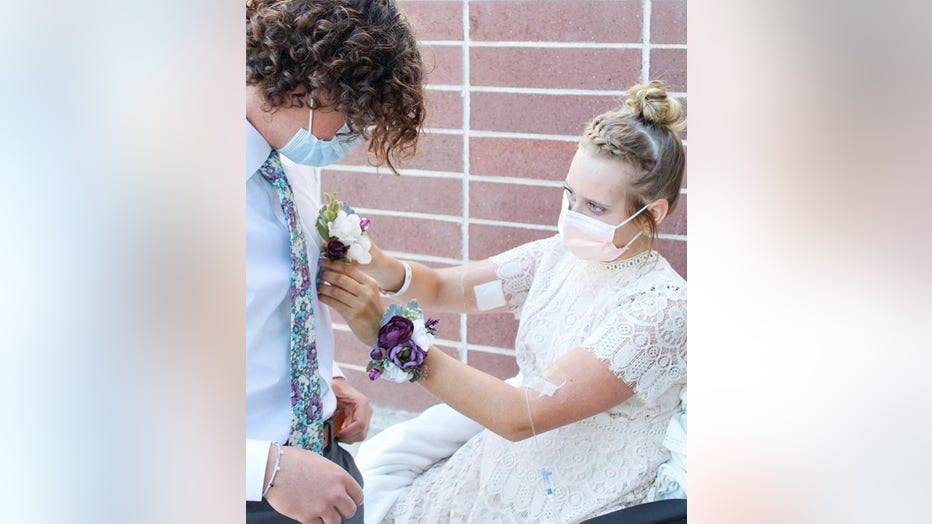 “The nurses painted her nails, she did her own makeup and hair and then her physical therapist helped get her up and into a chair.”

Sarah’s mother, Amy Frei, told KTVU one nurse even came in on her day off to help with the primping. “It was fun for her to be able to get ready and she appreciated the extra care from her nurses,” mom said.

Just a few days prior, Sarah was asked to the dance by a friend, who along with other schoolmates had decided to have a homecoming of their own since pandemic restrictions called off the official school event this year.

Amy Frei said that friends on her daughter’s cheer team had planned the dance and did not want Sarah to miss out. They reached out to the mom to coordinate, and she then worked with the hospital staff to make it happen.

“They left her schedule open with no surgeries or procedures for that particular Saturday. In fact, the doctors postponed a surgery to the following day because they knew about Sarah's homecoming date!” Amy Frei explained.

Her daughter’s friend, Andrew would ask her to the dance and came up with quite a creative plan to surprise Sarah.

“He made a poster and got her some of her favorite treats then wrote each of the letters of his name on the tops of her favorite soda, Dr. Pepper,” Sarah’s mom told KTVU. “We brought these to her at the hospital the week before the dance. She was shocked when she read the poster and saw that she was getting asked to Homecoming!”

Frei said her daughter was initially confused about how it would all work, but once it was explained and she figured out it was Andrew who was asking, the teen got emotional and then got very excited.

The sweet night went like this: Andrew and two other friends arrived at the hospital, took photos together, brought Sarah some food and then her date “picked her up” for the dance. 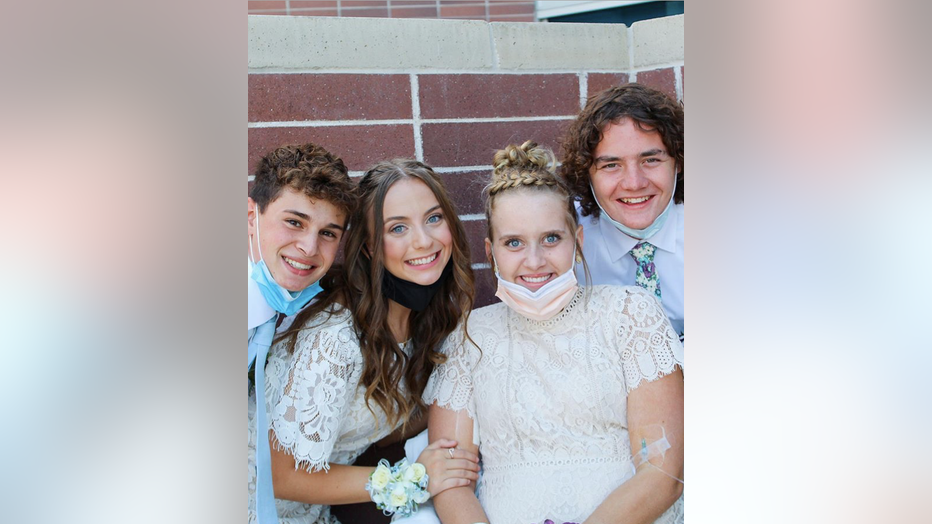 “Andrew left with ‘virtual’ Sarah,” explained mom, which meant that while her daughter could not physically leave the hospital with her date, he brought her along to the dance on FaceTime. 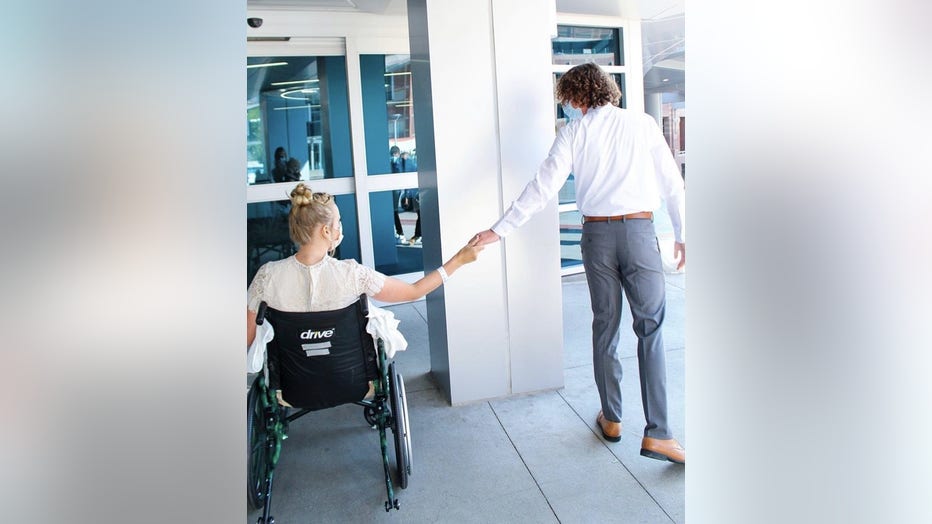 “Back up in her room, she enjoyed the night with Andrew. They ate dinner together then danced the night away. She enjoyed the music, the laughter, and conversations with friends. It was a wonderful night!” said Sarah’s mother, adding, “It was a much-needed distraction from ‘hospital life’ and gave her a sense of normalcy.”

Sarah herself took to social media with a photo from that night writing, “i’m so thankful i was able to get a senior homecoming, even though it was nothing like i thought it would be! i haven’t had that much fun in a long time and i loved being able to get ready for something. andrew was a perfect date and i had such an amazing night dancing virtually ;)”

Many were moved to tears by the homecoming photos and the acts of love and kindness that made it all happen, not to mention the uplifting spirit and resiliency demonstrated by Sarah.

On Instagram, @whitney.hidalgo commented, “This is absolutely amazing and beyond touching,” adding that it's "what the world needs more of.”

@lisalynne44 wrote, “This might be one of the most amazing things I have seen. It truly is miraculous to see such progress in this amount of time and such strength from this beautiful girl.”

Many others have recognized the remarkable progress and incredible fight displayed by the teen.

On Sept. 10, six weeks after Sarah's accident, her family shared on Instagram all that she had gone through to that point. "Coming home from a trip with 3 friends, a drunk driver swerved into their lane and hit their car head on. Over the past six weeks Sarah has undergone 19 surgeries, is paralyzed from the waist down, and has had both of her legs amputated just above mid-thigh."

Along with the update, was a photo, the first they'd posted of "what her body looks like now." Family members said they had been cautious about the photos they shared, as they wanted Sarah to be comfortable with every picture.

They said she had given permission to share one of her full body. She's seen sitting up, all smiles with both thumbs up, as the teen was described as beautiful, confident and a radiating light.

“Her recovery has been truly miraculous. She is a fighter,” her mother said, adding that it was something noted even by an emergency worker who was at the scene of the July 30 accident. “Sarah was in a lot of pain after the accident but this particular first responder said she could tell she had a strong will and was a fighter,” recalled the mom.

The high school senior has always operated with an optimistic and hopeful outlook. “She has always been a happy person who loves life,” said Amy Frei who described her daughter as outgoing and very involved in school. She’s a cheerleader and is also on the golf team, a straight A student, and was nominated by her classmates to be a part of the HOPE Squad, which works to help reduce youth suicide. She is also musically talented, loves the outdoors, and enjoys spending time with her family and friends.

“Sarah has strength of character and is not afraid to stand up for what is right and true. The inner strength she has is reflected in her positive attitude, her courage, her acceptance, and love for life despite this challenge that has been placed before her,” her mother said.

And those aspects of her daughter continued to shine in the face of adversity and loss. “This confidence and knowledge of who she is has helped her to stay positive and strong despite the tragic loss she has endured," her mother said, adding that her daughter was determined to make the most of her situation.

After spending five weeks in the intensive care unit and then two weeks on a regular hospital floor at the University of Utah Medical Center, Sarah's now going through her final stage of hospital recovery and undergoing rehabilitation. 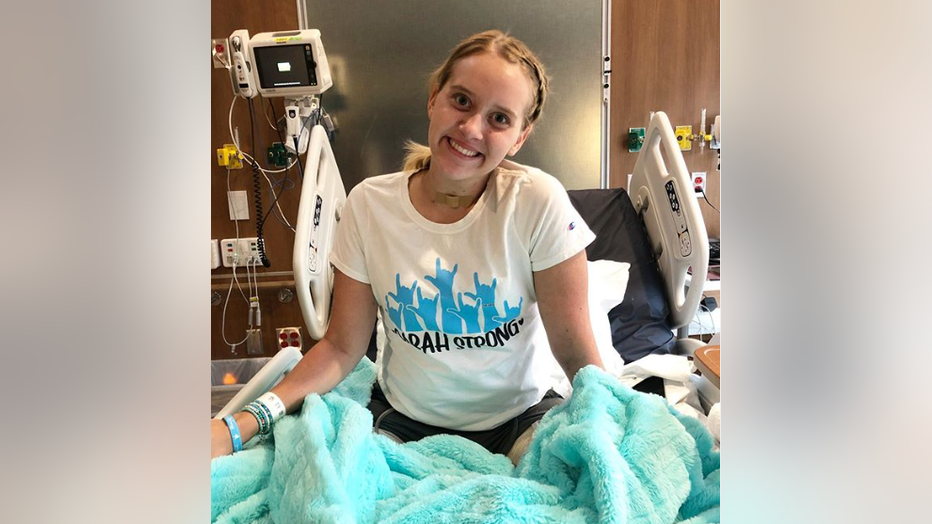 On Sept. 19, after being transferred to the Neilsen Rehabilitation Hospital at the University of Utah, Sarah wrote this on Instagram, sharing words of gratitude to those who had cared for her: “I’ve learned so much here in the hospital,” she said. “We can always be grateful for what we have. Always say I love you. Compliment people if it comes to your mind! I love seeing the smile on my nurses or CNA’s faces when I give them a compliment!" she wrote, thanking them for their support and kindness.

Sarah continued to make strides in her recovery as she worked on moving around and balance, as well as rolling side to side and getting in and out of her wheelchair.  She's focused on regaining her strength and independence with hopes of going home in the coming weeks.

In a post on Instagram last week, the family shared a photo of her during a rehabilitation session and offered updates. “She’s working hard and also having fun!!” the post said.

That’s despite setbacks she’s faced. “The incision sites from her last surgery have come apart," the post explained. “It’s a pretty big wound and will take about 2 months to heal,” her family wrote.

But true to her spirit, the teen has pushed on even with the arrival of new challenges. “One of the people helping Sarah said ‘It’s easy to be proud of her,’ And it’s so true. She amazes us everyday and maintains a positive and happy attitude.”

The family asked for continued prayers for her wounds to heal, as they expressed gratitude saying they have been moved by the outpouring of support from near and far, from people all over the world who have heard Sarah’s story.

It’s often said that it’s through adversity and hardship that true character is revealed, an adage that appeared to be well illustrated through Sarah Frei whose true character has offered others hope and inspiration.

“We know that Sarah will do great things with her life. She will be an example of strength, positivity, and love. She will be a force in this world for good. She will change lives for the better,"  Amy Frei said of her daughter, adding, "She already has.”