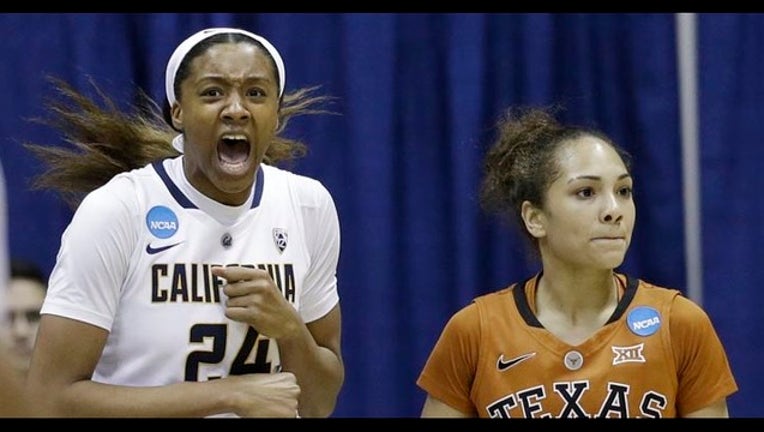 BERKELEY, Calif. (AP) — Even just a month ago, Karen Aston had no idea how her Texas team would come together in the end. The Longhorns were dealing with devastating injuries and so many moving parts.

That's when Imani McGee-Stafford began to show Aston something — in her eyes, in her demeanor at practice, in her performance at the Big 12 Conference tournament.

Now, the 6-foot-7 center is making her mark on this NCAA Tournament, leading fifth-seeded Texas back to the Sweet 16 for the first time in 11 years after a 73-70 win against No. 4 seed California on Sunday night.

McGee-Stafford had 20 points and 11 rebounds while creating a daunting mismatch inside, and between her imposing presence alongside 6-5 Kelsey Lang in the paint and a cast of scrappy guards jumping in the passing lanes and wreaking havoc, Texas did everything on both ends of the floor to return to the regional semifinals.

"What was so encouraging about the team tonight was that they were a team. This particular group of kids, they have to be a team," Aston said. "There was a point in time a month or so ago I don't think anyone saw this coming."

Freshman Brooke McCarty scored twice on driving layups down the stretch on the way to 16 points off the bench, and Texas pushed the pace to force Cal into bad decisions.

A year after losing a tough second-round game on Maryland's home floor, the Longhorns insisted they would have no problem taking on the Golden Bears with another feisty home crowd against them.

Now, they're headed to the Albany Regional and a potential date with two-time defending champion Connecticut.

Cal's Mercedes Jefflo scored with 1:30 remaining to cut the Texas lead to 64-60 before Lang answered on the other end.

"We were just trying to keep pushing," McGee-Stafford said.

Jefflo scored 22 points for Cal (24-10) on a night Pac-12 Player of the Year Reshanda Gray fouled out with 2:35 remaining and seven points in her final collegiate game.

Bears point guard Brittany Boyd had 17 points, 10 assists and nine rebounds, just missing the triple-double while playing her last college game in her hometown before friends and family.

Texas began the second half with a 12-0 run, getting baskets from six different players, and forced eight turnovers as Cal missed its initial seven shots after the break and hurt its chances by not taking care of the ball.

Each time the Golden Bears threatened to get right back in it, McCarty, McGee-Stafford and Texas took charge with a big shot or defensive stop — or steal.

Jefflo pulled Cal within 45-42 on a 3-pointer with 10:22 to go but had the ball stolen the next time down that led to an easy layup by McCarty.

Cal coach Lindsay Gottlieb used a timeout with 14:01 left, and she and Boyd could be seen yelling in the huddle. Courtney Range scored the Bears' first basket with 13:42 remaining.

Texas smothered Cal's posts in the paint and kept pressure on the perimeter.

"Their stat sheet looks the way we wanted ours to look," Gottlieb said. "They did not let us get anything easy."

Both teams pushed the ball in an up-tempo first half and clogged the paint to try to put pressure on the perimeter shooters. There were a combined 21 turnovers and nobody in double digits, the score even at 27.

The slow start in the second half did in Cal, which credited Texas' game plan for taking the Bears out of what they like to do.

"We were being too lazy with our passes," Boyd said. "We just weren't taking care of the ball."

Texas: The Longhorns are headed to their 12th Sweet Sixteen. ... Four players had at least two steals, and Texas had six of its nine total in the first half. ... The Longhorns reached the regional semifinals as a fifth seed for the first time. ... Aston was an assistant coach on the program's last Sweet Sixteen team.

Cal: The Bears missed reaching their third Sweet Sixteen in program history and second in three seasons after a run to their first Final Four two years ago. ... Fourth-year coach Gottlieb is 7-4 in the NCAA Tournament at Cal. ... The Bears trail the overall series with Texas 5-2. ... Gray, coming off a 22-point, nine-rebound outing in the opener Friday against Wichita State, played 19 minutes.