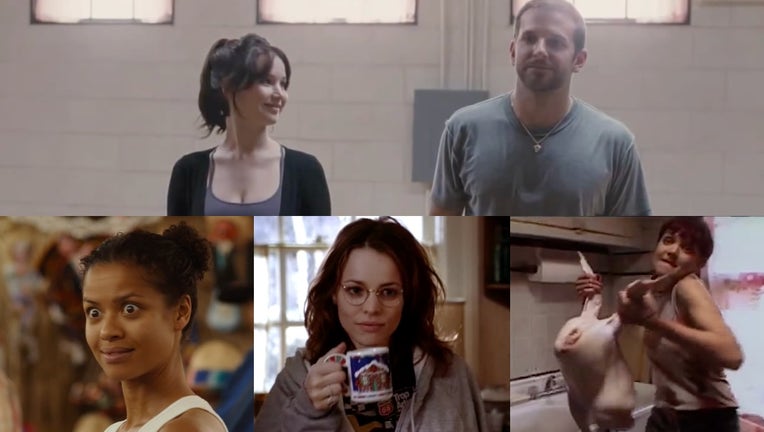 Top: Jennifer Lawrence and Bradley Cooper in "Silver Linings Playbook." Bottom, from left: Gugug MBatha-Raw in "Beyond the Lights," Rachel McAdams in "The Family Stone," Katie Holmes in "Pieces of April." Screenshots: Tubi.

CHICAGO - Thanksgiving can be a time for picture perfect family memories. But it can also be a time for, well, some complicated family dynamics too. Thankfully, there’s nothing like a good movie to get you through it. These dramedies understand that family comes with its own ups and downs. And, best of all, they’re all streaming (for free!) on Tubi.

Looking to break free from her "Dawson’s Creek" mold, Katie Holmes took on the role of alterna-girl April Burns in this indie drama that’s set, appropriately enough, on turkey day itself. With family matriarch Joy (Patricia Clarkson) dying of breast cancer, April decides to create a nice family memory by inviting the highly dysfunctional Burns clan to her small New York City apartment for Thanksgiving. When it turns out her oven is broken, however, April has to rope in her whole building to try to pull off the feast. Though tensions and tempers reach a boiling point as the Burns fret about April’s erratic ways, in the end, "Pieces of April" is a sweet celebration of perfectly imperfect family dynamics.

What happens when an uptight Manhattan executive meets her boyfriend’s tightknit bohemian family? Fireworks, of course. And plenty of comedy too. Over the past 16 years, "The Family Stone" has grown into something of a modern Christmas classic—and with good reason. It’s a movie that understands that getting through the tough times only helps you appreciate the good times more. With a stacked ensemble cast that includes Diane Keaton, Sarah Jessica Parker, Dermot Mulroney, Claire Danes, Luke Wilson and a delightfully disheveled Rachel McAdams, you’re sure to find at least someone you relate to in this story about fitting in, standing out and finding yourself within your family.

The only things more stressful than family holidays are family weddings. Writer/director Rick Famuyiwa puts that issue front and center in this sweet, delightfully silly romantic comedy. Tensions arise when do-gooders Lucia Ramirez (America Ferrera) and Marcus Boyd (Lance Gross) announce their surprise engagement—especially because their families didn’t even know they were dating. And things only get more awkward when it turns out Marcus’ dad Brad (Forest Whitaker) and Lucia’s dad Miguel (Carlos Mencia) just happened to butt heads earlier that day. A rare interracial love story that doesn’t involve white characters, "Our Family Wedding" looks at what happens when traditions clash and families mix, all in the name of love. As Lucia and Marcus must constantly remind themselves: "Our marriage, their wedding."

The power of positivity fuels this dysfunctional family dramedy from acclaimed director David O. Russell. Newly released from a mental health facility where he was being treated for his bipolar disorder, 30-something Pat Solitano Jr. (Bradley Cooper) moves back into his childhood home. There his parents Robert De Niro and Jacki Weaver try to steer him away from obsessing over his ex-wife. And while Pat doesn’t always listen to them, he does listen to troubled young widow Tiffany Maxwell (Jennifer Lawrence), who encourages/coerces him into serving as her partner for a local dance contest. This prickly but ultimately heartwarming romantic comedy was nominated for eight Academy Awards and won Lawrence the Best Actress Oscar. With a bunch of tense family squabbles and a major subplot involving the Philadelphia Eagles, it makes for a perfect Thanksgiving watch.

Things seem more than all right for happily married couple Nic (Annette Bening) and Jules Allgood (Julianne Moore) and their two kids Laser (Josh Hutcherson) and Joni (Mia Wasikowska). But when Joni turns 18 and decides to get in touch with the sperm donor who helped make her family possible, everything suddenly gets a whole lot more complicated. A few phone calls later, the Allgoods are introduced to Paul Hatfield (Mark Ruffalo), the motorcycle-riding, organic food loving restaurant owner who comes whirling into their lives like a free-spirited tornado. Over its breezy runtime, this critically acclaimed, Oscar-nominated comedy-drama looks at what defines a family and how people we don’t even know can shape our lives.

"Beyond The Lights" is about a lot of things: creative identity, mental heath, sexism in the music industry and romantic partnership. But it’s also about a complicated mother/daughter relationship. Minnie Driver’s Macy Jean is the ultimate stage mom. In her mind, second place is first loser. So she’s steered her gifted daughter Noni (Gugu Mbatha-Raw) into the life of a pop singer on the verge of superstardom. As Noni grapples with the pressures of fame and a star-crossed love story with a young police officer, however, she also has to learn to break free from her mother’s influence and figure out who she really wants to be. This achingly beautiful coming-of-age romance is an ode to setting boundaries and not letting anyone control you—even the people who raised you.