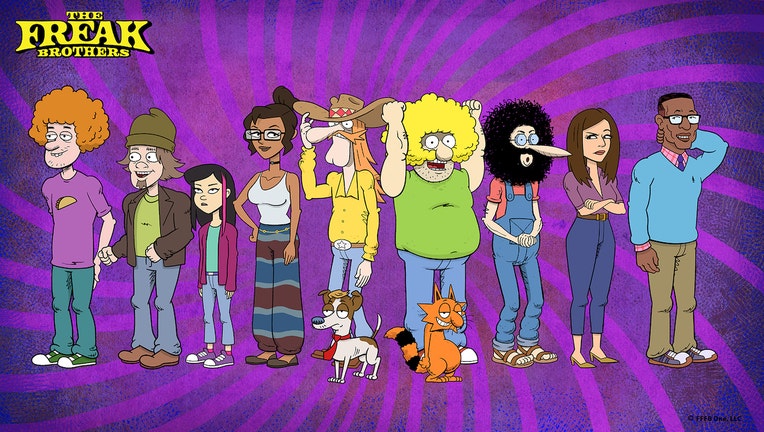 THE FREAK BROTHERS: Tubi's first original animated comedy following three stoners and their sardonic cat who, after smoking a magical strain of weed in 1969, fall asleep for 50 years and wake up in 2020, bringing their '60s San Francisco attitude to

CHICAGO - Stock up on Pizza Rolls and remember to drink plenty of water: Woody Harrelson, John Goodman, Tiffany Haddish, Pete Davidson and others are set to light up the screen in Tubi’s forthcoming adult animation series "The Freak Brothers."

Premiering Sunday, Nov. 14, the series will launch with two episodes available, with a new episode arriving each week until the season-one finale, which drops Sunday, Dec. 26. Based on Gilbert Shelton’s cult classic underground comic books "The Fabulous Furry Freak Brothers," the series marks Tubi’s first foray into the world of animated series, and is part of the free streamer’s growing adult humor collection. (You might even say it’s a high-light. Get it?)

Produced by WTG Enterprises and distributed by Lionsgate, the eight-episode first season "chronicles the escapades of a trio of stoner anti-establishment characters and their cat who wake up from a 50-year nap after smoking a magical strain of weed in 1969, and must adjust to life with a new family in present-day San Francisco."

In addition to that fully-baked foursome, the cast includes Adam Devine and Blake Anderson, who also serve as executive producers, along with Andrea Savage, La La Anthony and Rapper ScHoolboy Q.

Viewers who tune into FOX’s popular "Animation Domination" programming block on Sunday, Nov. 14 will get an advance look at the series; a 90-second trailer will air during the broadcast of "Family Guy" (9:30-10:00 p.m. ET/PT).

Adam Lewinson, Tubi’s Chief Content Officer, had this to say of the series: "We can’t wait for Tubi viewers to freak out to ‘The Freak Brothers,’ with its unforgettably irreverent comedy infused with heart, alongside an iconic ensemble voice cast and a stellar team of elite producers and writers ... This comedy is 50 years in the making and we are thrilled to have it debut on Tubi as our first original animated comedy, marking a new step for Tubi as we expand our adult humor offerings."

Lionsgate President of Worldwide Television Distribution Jim Packer added, "We’re pleased to partner with FOX and Tubi on a new paradigm for distributing original animation to our consumers. The timeless humor of ‘The Freak Brothers’ has resonated with audiences for years, and this edgy comedy gives it a fresh and inventive spin for a whole new generation of fans."

"As we continue our expansion into original animation, a cornerstone of the FOX brand, we’re thrilled Tubi is joining the party with its first original animated series," said Michael Thorn, President of Entertainment, FOX Entertainment. "With its counterculture roots, anti-establishment comedic POV and, as Adam said, an all-star team of cast and producers, ‘The Freak Brothers’ is the perfect complement to Animation Domination and provides the ideal opportunity to not only grow Tubi’s audience, but take the animation genre to the next level in AVOD. Stay tuned for more original Tubi animated content soon."

More on the series, per a press release:

Dude, Where’s My Car? (2000): It’s been more than 20 years since Ashton Kutcher and Seann William Scott first started searching for their car. Do the potheads of "Dude" ever find their ride? Press play to find out. 83 minutes. Rated PG-13. Also features Jennifer Garner.

Meatballs (1979): Bill Murray stars in this deeply stupid (that’s a compliment) comedy classic from "Ghostbusters" director Ivan Reitman, in which "camp counselor Tripper guides a collection of lovable campers and libidinous staff through the pleasures of a coed summer." 93 minutes. Rated PG.

Rock ‘N’ Roll High School (1979): If you were going to attempt to take control of your high school and overthrow its music-hating administration, is there anyone you’d want in your corner more than The Ramones? 93 minutes. Rated PG.