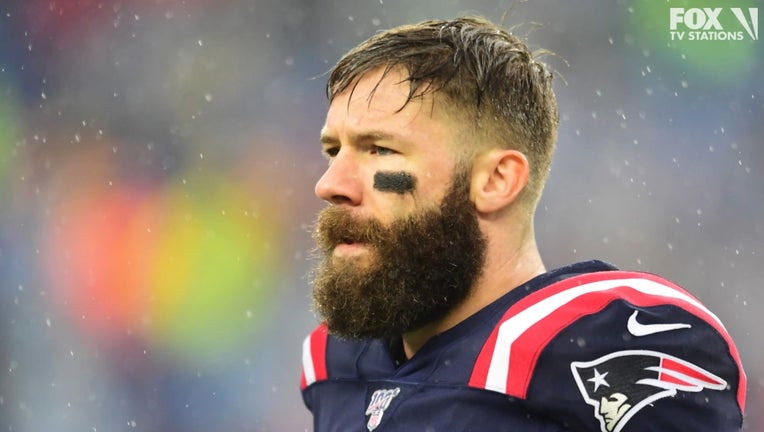 When Julian Edelman faces his hometown team on Sunday, he’ll have a chance to show off for the old neighborhood.

One resident in particular.

Hall of Famer Jerry Rice -- “Mr. Rice,” to Edelman -- lived down the street from the Patriots receiver in Woodside, California, about a half-hour south of the San Francisco 49ers’ Candlestick Park home. Edelman dated Rice’s daughter, Jaqui, in high school and took her to the prom, but that's not why he was shy around her father.

“He was so busy with football it wasn’t anything like me being able to ask any questions. I was too terrified of him because he was the G.O.A.T. and he was a god in our area,” the 2019 Super Bowl MVP said Friday of the 1989 Super Bowl MVP as New England prepared to face the 49ers. “He’s definitely been an inspiration, for his work ethic and how seriously he took his craft.”

A 10-time All-Pro selection who is the NFL’s all-time leader in receptions, receiving yards and touchdowns, Rice was known not just for his physical skills but also for his grueling workouts. At 5-foot-10 -- 4 inches shorter than Rice -- Edelman figured he would have to make his way in football with the latter.

So if Rice built his leg strength by running up a hill in a neighborhood park, Edelman was going to climb the same route, a 2.5 to 3-mile incline known as “Jerry Rice Hill" that would leave the would-be football star vomiting.

“Anything that was hard or anything was ‘Jerry Rice something,’” Edelman explained. “It was folklore. It was known that Jerry Rice used to go out and run that hill, and everyone knew about his work ethic."

Whatever Edelman is doing has been working.

The Kent State quarterback turned NFL receiver hooked up with Tom Brady for three 1,000-yard seasons. But it’s in the postseason that Edelman has truly excelled: His 118 playoff receptions for 1,442 yards are the most in NFL history except for one man -- Jerry Rice.

“It’s an honor to even be near anything of his, in any kind of thing,” Edelman said.

But now, in his 11th season and first without Brady at quarterback, Edelman has seen his production drop off with Cam Newton. His seven catches over the last three games are his fewest since he became a starter in 2013, and his offensive snaps are down.

“Our coaching staff has been here and had a tight group for a very long time,” he said. “(Offensive coordinator Josh McDaniels) knows me very well. I’ve played under him for the past nine, 10 years. Whatever he asks me to do, I’m going to do. ... That’s my job as a player, try to go out and just do what they ask me to do and let them worry about the grand scheme.”

It’s just the second time in his career that Edelman, whose childhood dogs were named “Dwight” and “Montana,” will face the 49ers. In 2016, he caught eight passes for 77 yards and a touchdown in New England’s 30-17 victory.

“It’s always a pretty special kind of game, just because all my friends back home, my family, we were all die-hard Niners fans,” he said. “Any time you get to see that red and gold, it’s special.”