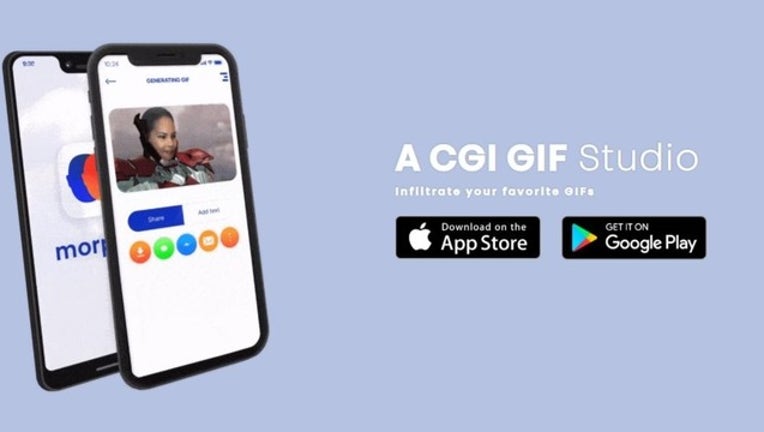 The Morphin app lets you put yourself in GIFs. Photo: Morphin.com

SAN JOSE, Calif. (KTVU) - If a picture is worth a thousand words, a reaction GIF that show your emotions should count for at least half of that. For those hyped about Avengers: Endgame, there’s now a website where you can swap in your face onto the popular characters.

The creators of Morphin, the CGI-GIF generator app have just launched a website where you can put your face on Avengers-themed GIFs. “It's accessible easily without having to go through the app store. You can use pictures from your friends and surprise them, which you can't do yet in the app,” said Loic Ledoux, co-founder of Uraniom, the startup that created the app.

The Morphin app has been publicly available for about a month now – it has a sizeable collection of GIFs– from Obama’s mic drop, to the backpack kid doing the floss. All it takes is one selfie, and you can create an instant CGI with your face in the GIFs on the app, available on iOS and Android. GIFs can be exported to your camera roll, and can be shared on any medium you choose. You can also add meme-style text to the GIFs generated in the app.

For now, the app only works with selfies. A future update will let users import pictures from the camera roll – so that you can surprise your friends with GIFs of themselves.

“We don't use GANs, but we do use CNNs (Convolutional neural network) in the avatar 3D reconstruction process,” Ledoux said. CNNs are a type of deep learning (AI that mimics how neurons function) with a wide variety of applications in image, video, and natural language processing. Unlike deepfakes, the GIFs generated by Morphin look like computer-generated imagery.

Ledoux declined to share stats on how the app is doing - though he pointed out that Morphin’s Giphy page recently crossed the 40M views mark. The app keeps it fresh by adding new gifs based on whatever is trending in pop culture. For now, they’re fully onboard the Avengers hype train.