About 5,000 nurses at Stanford and Packard Children's Hospital went on strike Monday. They say they are fighting for fair contracts. KTVU's Amanda Quintana reports.

PALO ALTO, Calif. - About 5,000 nurses at Stanford and Packard Children's Hospital began a strike Monday. They say they're fighting for a fair contract after their contracts expired on March 31.

In a news release, members of the nurse’s union, called the Committee for Recognition of Nursing Achievement known as CRONA, say they want Stanford and Packard to solve the burnout and exhaustion that’s driving many nurses to reconsider their professions.

"We want to make nursing attractive and for people to stay and Stanford has really got to step up their game in order to do that," said operating room nurse Anthony Veitch.

Veitch said many colleagues have chosen to quit or retire early, which has caused severe understaffing. He said nurses are called in at all hours of the day and night on their days off.

"Nurses are caregivers, and so we give ourselves, and we give up our families, we give everything for the patients in the hospitals," said critical care response nurse Maureen Sullivan. "That’s a behavior that needs to change if we’re going to keep nursing safe. We have to start thinking of ourselves."

They say hospital leadership refuses to acknowledge the reality of understaffing, requests for overtime and the little time these nurses get to rest with their families.

"It seems to us as nurses that the hospital is tone-deaf. They’re just totally oblivious to what’s actually going on with the bedside nurses here and what you see here is the result of that," said Veitch.

The hospital said they’ve worked to come to an agreement and feel they’ve made meaningful progress at the bargaining table so far, offering wage increases and retention-incentive payments.

Beatty said burnout is an issue hospitals are seeing across the country, and Stanford leaders value and appreciate their nurses.

During the pandemic, Beatty said Stanford never broke the nurse to patient ratio set by the state, and nearly 75% of the time nurses exceeded that ratio.

"On a shift by shift basis there could be times when it’s challenging, it changes its dynamic on a shift to shift basis. So I want to acknowledge that. But overall, we’ve had very strong staffing," said Beatty. "We appreciate how hard the pandemic has been, and we recognize additional support and have offered that through additional proposals."

In a statement from Stanford Health Care, management said that "we respect our nurses’ legal right to take part in a work stoppage but are deeply disappointed that the union chose this path. A union work stoppage is a serious event that is disruptive to our patients, families, and colleagues. The impact can be deep, long-lasting, and costly."

If the nurses are still on strike May 1, they will no longer have access to employer health benefits for the month. Hospital leadership said those benefits are only provided to employees actively working for the hospitals on the first of the month, and the nurses can choose to continue coverage with COBRA.

An online petition to rescind that decision has received nearly 30,000 signatures.

Many of the people driving by the strikers honked and cheered in support of the nurses.

Senator Dave Cortese (D-Silicon Valley) put out a statement saying he stands with the nurses in calling for better pay, staffing conditions, and a healthier work environment.

"I encourage everyone to listen to the needs of these frontline heroes who led us through the pandemic and call on Stanford to invest in their nursing staff that are suffering from extreme exhaustion and burnout. We know that our nurses are underpaid and under-appreciated," said Cortese.

Both of the hospitals are still open – staffed with replacement nurses. But some procedures and services had to be reduced or rescheduled because of this strike. 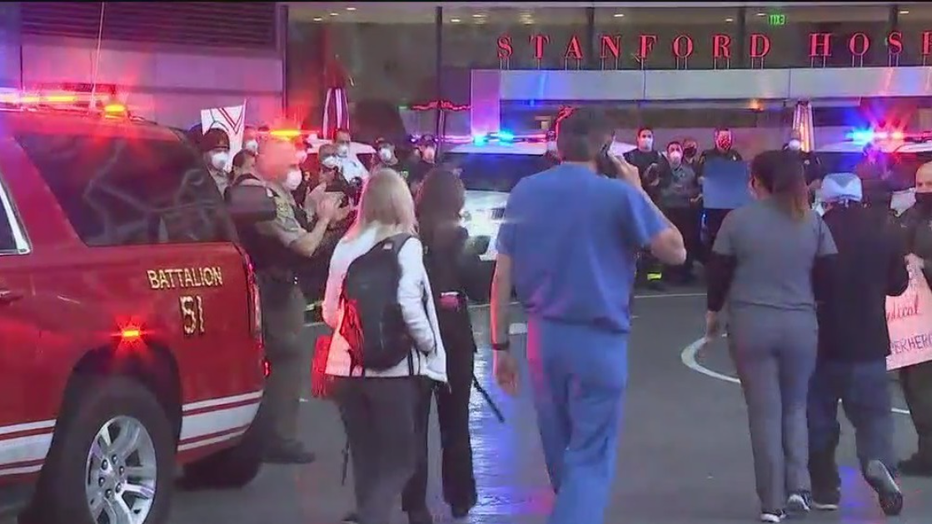