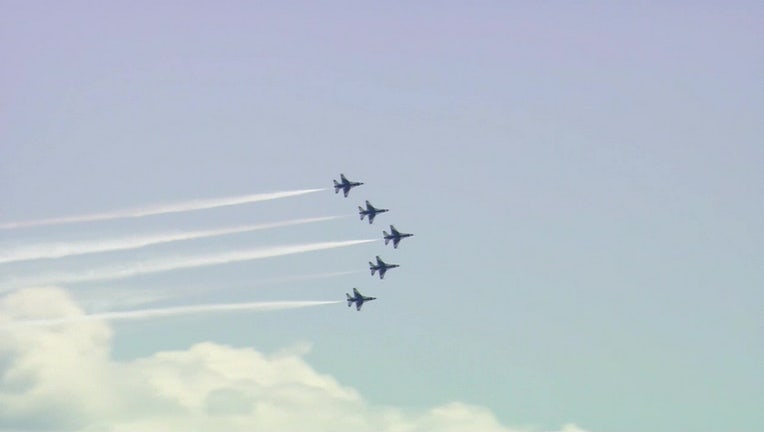 LAS VEGAS - High in the skies over Las Vegas, the U.S. Air Force Air Demonstration Squadron -- also known as the “Thunderbirds" -- showed its support on Saturday for those on the frontlines responding to the coronavirus pandemic.

The Thunderbirds said the flyover was to show appreciation and support for health care workers, first responders and other essential personnel in Sin City and around the nation working in the battle against COVID-19.

“It is an honor to fly for the Americans at the forefront of our nation’s fight against the coronavirus,” Lt. Col. John Caldwell, Thunderbirds commander and leader, said in a news release. “They are true heroes and we look forward to demonstrating the support of the 685,000 total force Airmen of the U.S. Air Force for health care workers, first responders and COVID-19 essential personnel in Las Vegas and across the nation.”

The flyover on Saturday featured eight F-16 Fighting Falcons, which soared throughout Las Vegas starting at 2:30 p.m. and lasted about 25 minutes.

The Thunderbirds’ flight path started at Nellis Air Base and took them through Centennial Hills, Summerlin, Spring Valley, along the Las Vegas Strip, and down to Henderson before returning to Nellis Air Force Base.

Images showed the aircraft soaring over the famous Las Vegas Strip and casinos now empty due to the virus outbreak.

Secretary of the Air Force Barbara Barrett shared a video on Twitter of an inside look of the planes flying over the Strip.

Las Vegas residents were able to enjoy the flyover safely from their home-quarantine.

The Thunderbirds had asked that people refrain from traveling to landmarks and gathering in large groups to view the flyover.

“While our jets will be flying close together, we want (to) stress that no one should travel or gather to see us fly,” Caldwell said. “We want Las Vegas residents to look up from their homes and enjoy the display of American resolve and pride while keeping front line coronavirus responders in their hearts during this unprecedented time in our nation.”

Officials in Clark County, Nevada, said the show in the sky was a "great viewing experience" as the aircraft flew by.

"We haven't had much to enjoy lately, but today the Nellis Air Force Base U.S. Air Force team provided a much-needed lift," the Clark County communications team said on Facebook.