TOKYO - The Tokyo Olympics, delayed a year due to the coronavirus pandemic and began amid sweltering heat, is now under the potential threat of a typhoon this week.

Tropical Storm Nepartak is forecast to disrupt at least some parts of the Games. But the surfers at Tsurigasaki beach say it could actually improve the competition so long as it doesn't hit the beach directly.

The mid-grade tropical storm was headed northwest over the Pacific Ocean east of Japan on Monday with landfall expected Tuesday afternoon, according to the Japan Meteorological Agency. The storm could bring strong winds, up to 5.9 inches of rainfall and high waves as it moves across Japan’s northeastern region.

Archery, rowing and sailing have already adjusted their Tuesday schedules. Tokyo Games spokesman Masa Takaya said there were no other changes expected.

"It is a tropical storm of three grade out of five, so you shouldn’t be too much worried about that, but it is a typhoon in Japan interpretation," Takaya said. "This is the weakest category, but this is still a typhoon so we should not be too optimistic about the impact of the course."

On the beach about 90 miles east of Tokyo, the surfing competitors want the change in weather so long as the rain and wind don't make total landfall. The surfing competition was delayed Monday because of low tide. But if the storm hits as expected, it could deliver waves twice as high as expected.

"As a homeowner I say, ‘Oh no, stay away!’" said Kurt Korte, the official Olympic surfing forecaster. "But as a surfer, ‘OK, you can form if you stay out there,’ Everybody can agree a storm out in the distance is the best." 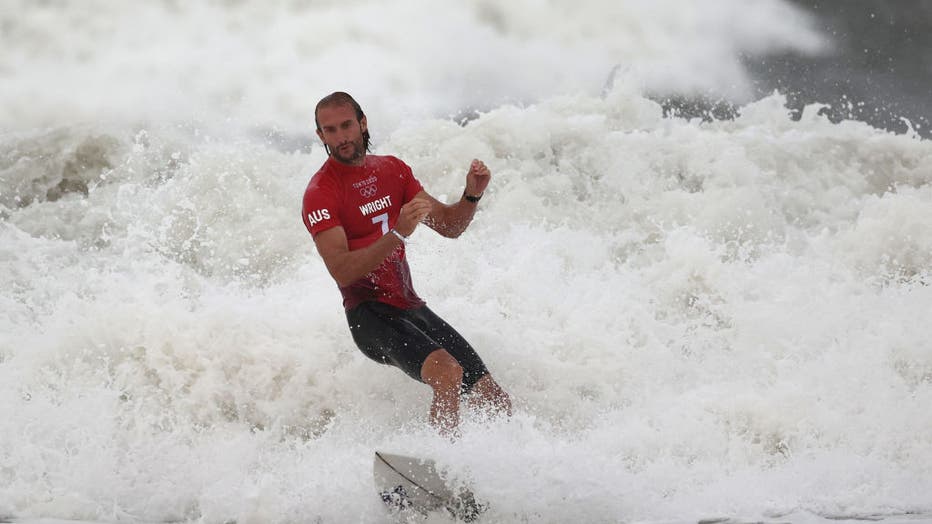 Owen Wright of Team Australia after riding a wave during his men's round 3 heat on day three of the Tokyo 2020 Olympic Games at Tsurigasaki Surfing Beach on July 26, 2021 in Ichinomiya, Chiba, Japan. (Photo by Ryan Pierse/Getty Images)

In advance, organizers made the first major alterations to the Olympic archery schedule because of the weather. There was an hour delay at the Beijing Games in 2008. Here, the Tuesday afternoon sessions have been postponed until Wednesday and Thursday.

"We’ve heard that storm could be anything from rain or 80-mph wind," said American archer Jack Williams.

Added Brady Ellison, his teammate: "Unless there’s lightning, right here, we’ll shoot it. We’ll deal with whatever it’s going to be. Rain just starts to suck in general."

The surf conditions were better Monday, as surfers were gifted 6-to-7-foot waves that were twice as good as the day before because of a predicted typhoon in the region whose effects should be felt in Japan on Tuesday. The conditions should set the stage yet again for an explosive air show during the third day of competition.

Whether it’ll have the same choppy winds as Monday is unknown but it proved to be a challenge for some surfers in Day 2.

Whatever weather reaches Tokyo, it will be just another hurdle in the delayed Games — which have been plagued with oppressive heat from the start.

Svetlana Gomboeva collapsed from heatstroke on the first day of archery but recovered to win a silver medal. Top-seeded Novak Djokovic and Medvedev, who complained his first-round match was "some of the worst" heat he’d ever played in, successfully leaned on the International Tennis Federation to give Olympics players extra time during breaks to offset the high temperatures.

Anastasia Pavlyuchenkova had resorted to shoving bags of ice up her skirt and fiddled with a tube blowing cold air next to her seat. The intense sun turned the park into a furnace during the skateboarding competition, radiating off the light concrete with such blinding effect that skaters complained the heat was softening the rubber joints on their wheel axles and making the boards harder to control.

July and August in Japan are notoriously hot and humid. Japan has faced criticism for not accurately describing the severity and, instead, calling it mild and ideal during the bidding process.

Daytime highs regularly hit 95 degrees but have exceeded 104 degrees in some places in recent years. The Environment Ministry began issuing heatstroke alerts in July 2020 for the Tokyo areas and in April for the entire nation.

Japan reported 112 deaths from June to September last year and 64,869 people taken to hospitals by ambulance for heat-related issues. Tokyo logged the largest number of heatstroke sufferers at 5,836 during the three-month period.

The Japanese Air Force performed a colorful flyover over Tokyo ahead of the opening ceremony of the Olympics on July 23, officials said. Credit - uminomagu via Storyful

Australian canoeist Jessica Fox, the gold medal favorite in the kayak slalom, said the wild weather swings have been a disruption to the Olympic event. "It is like a bath," she said. "It is like paddling in bathwater."

And the impending typhoon disruption?

"I am a bit concerned about that," Fox said. "I saw the surfers and they were all excited about the weather, which isn’t ideal for us."

Asked on Monday if Tokyo officials feel they can't catch a break, Takaya said they've had to be flexible.

"I mean, you know, we're supposed to react to any situation, that's one of our jobs," he said. "This is absolutely a regular exercise we have to face."