Tom Brady: A look at his NFL career

Widely considered the greatest quarterback to play the game, Brady won three NFL MVP awards, was a first-team All-Pro three times and was selected to the Pro Bowl 15 times.

Tom Brady will join FOX Sports as a lead NFL analyst once his playing career is finally over.

Brady, 44, will call the premier game of the NFL weekend and will broadcast alongside Kevin Burkhardt. The announcement was made on the FOX earnings call Tuesday morning.

"We are pleased to announce that immediately following his playing career, 7-time Super Bowl Champion Tom Brady will be joining us at @FOXSports as our lead analyst," Murdoch said in a statement.

"We are delighted that Tom has committed to joining the Fox team and wish him all the best during this upcoming season," the statement added.

It remains unclear when the Tampa Bay Buccaneers quarterback will officially hang up his cleats for good. Following the news, Brady tweeted that he is "excited," but has "a lot of unfinished business on the field with the @Buccaneers."

On Feb. 1, Brady announced his retirement, citing a desire to spend more time with his wife, supermodel Gisele Bundchen, and three children. But just weeks later, on March 13, he announced he was coming out of retirement and would return for his 23rd season.

"That time will come. But it’s not now. I love my teammates, and I love my supportive family. They make it all possible. I’m coming back for my 23rd season in Tampa. Unfinished business LFG," Brady wrote.

Brady became the starter at Michigan in 1998 and led the team to two bowl wins during the course of his collegiate career.

He was then drafted in the sixth round by the Patriots in 2000. Brady spent 20 seasons with the team — becoming the enduring face of the Patriots during a run that included nine Super Bowl appearances, six of those as a champion.

In March 2020, Brady announced that he signed a contract with the Tampa Bay Buccaneers. During his first season, he led the Bucs to victory and the team became the first to win a Super Bowl in their home stadium. 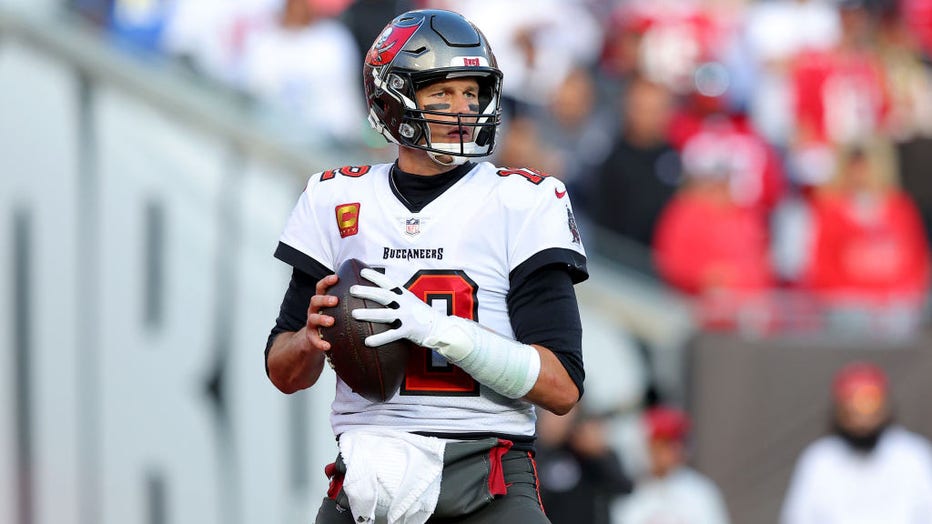 FILE IMAGe - Tom Brady #12 of the Tampa Bay Buccaneers looks to pass against the Los Angeles Rams during the first half in the NFC Divisional Playoff game at Raymond James Stadium on Jan. 23, 2022, in Tampa, Florida. (Photo by Kevin C. Cox/Getty Imag

Brady will begin his third season in Tampa Bay this year in pursuit of another championship.

What’s more, Brady could become the first quarterback to start a game in three foreign countries. The Bucs will face the Seattle Seahawks during the first regular-season NFL game in Germany on Nov. 13. He previously won two games with the Patriots in London and another in Mexico City.