The hearing, which involved testimony from lawyers for the House Intelligence and Judiciary committees, sets off a pivotal week as Democrats march toward a full House vote expected by Christmas.

Democrats insisted that Trump's push to have Ukraine investigate rival Joe Biden while at the same time withholding U.S. military aid ran counter to U.S. policy and benefited Russia as well as himself. But in one testy exchange, Republican attorney Stephen Castor dismissed the transcript of Trump's crucial call with Ukraine as “eight ambiguous lines" that did not amount to the president seeking a personal political favor.

The chief Democratic investigator, Dan Goldman, asked for his view and testified, “I don’t think there’s any other way to read the words on the page.”

Goldman is the top Democratic counsel on the Intelligence Committee. 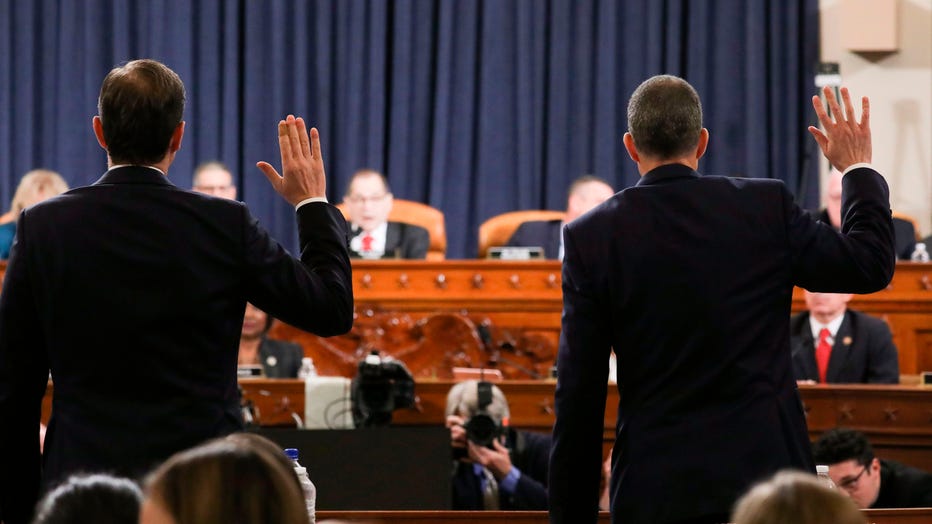 The Judiciary Committee is reviewing the findings of the Intelligence panel's 300-page report ahead of a vote, possibly as soon as this week, on two or more articles of impeachment on charges of abuse of power, bribery and obstruction against the Republican president. A vote in the full House could come before Christmas.

“The evidence is overwhelming,” Berke said. He added that America’s Founding Fathers spelled out the “ABCs of potential presidential abuses,” and Trump's conduct was a “trifecta” of impeachable offenses, “checking all three boxes.”

Goldman said Trump’s behavior is a “clear and present danger” to U.S. elections during his opening argument.

"President Trump's persistent and continuing effort to coerce a foreign country to help him cheat to win an election is a clear and present danger to our free and fair elections and to our national security," the Democratic counsel said.

As the committee was gaveled open, Chairman Jerrold Nadler was immediately interrupted by a protester shouting “We voted for Donald Trump!” The protester was escorted from the House hearing room by Capitol Police.

Nadler continued with his opening remarks saying, “President Trump put himself before country.” 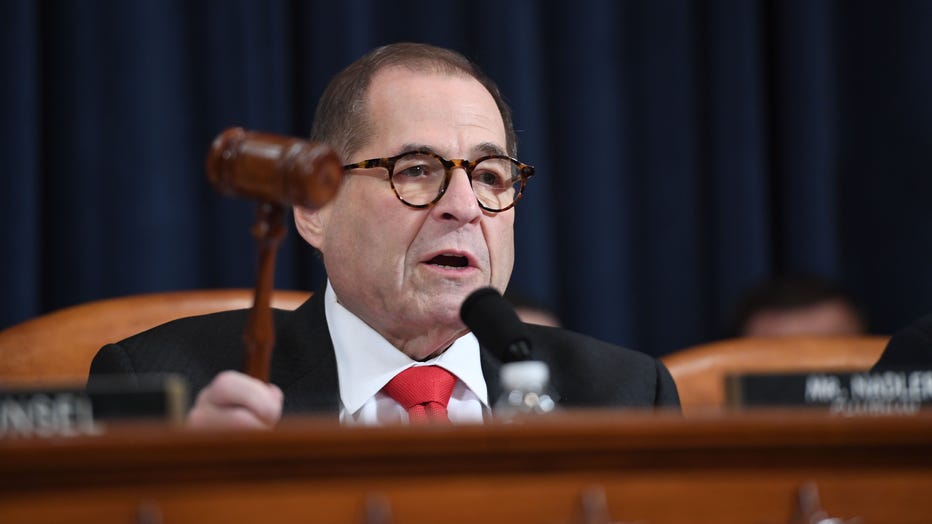 Chairman Rep. Jerrold Nadler, D-N.Y., speaks as the House Judiciary Committee receives presentations of evidence in the impeachment inquiry of President Donald Trump during a hearing on Capitol Hill in Washington, D.C. on Dec. 9, 2019. (Photo by SAUL

The top Republican on the panel, Rep. Doug Collins, called the hearing a “sham’’ and said Democrats are racing to jam impeachment through on a “clock and a calendar” ahead of the 2020 presidential election.

“They can't get over the fact that Donald Trump is the president of the United States and they don’t have a candidate that can beat him,” Collins said.

The hearing sets off a pivotal week as Democrats march toward a full House vote expected by Christmas. In drafting the articles of impeachment, Speaker Nancy Pelosi is facing a legal and political challenge of balancing the views of her majority while hitting the Constitution's bar of "treason, bribery or other high crimes and misdemeanors."

RELATED: 'No choice but to act': Pelosi says House will draft impeachment articles against Trump

During Monday’s hearing, Nadler said the case against Trump is clear after "multiple officials testified that the president’s demand for an investigation into his rivals was a part of his personal, political agenda, and not related to the foreign policy objectives of the United States."

Nadler added, “the integrity of our next election is at stake.”

The Republicans tried numerous times to halt or slow the proceedings, formally objecting several times that the committee’s Democratic counsel challenged Trump as he spelled out potential charges. Nadler responded that negative comments about Trump might well be expected in listing reasons to impeach him. The Republicans demanded roll call votes several times, including on “taking down” the negative comments, all defeated on party-line votes.

Republicans also were demanding to hear from Rep. Adam Schiff, the chairman of the Intelligence Committee, whose 300-page report provides the foundation for articles of impeachment. Schiff declined to appear, sending the panel's chief counsel to argue the case.

As a result, a poster was put up in the hearing room featuring Schiff on a milk carton, complete with a “missing" announcement. 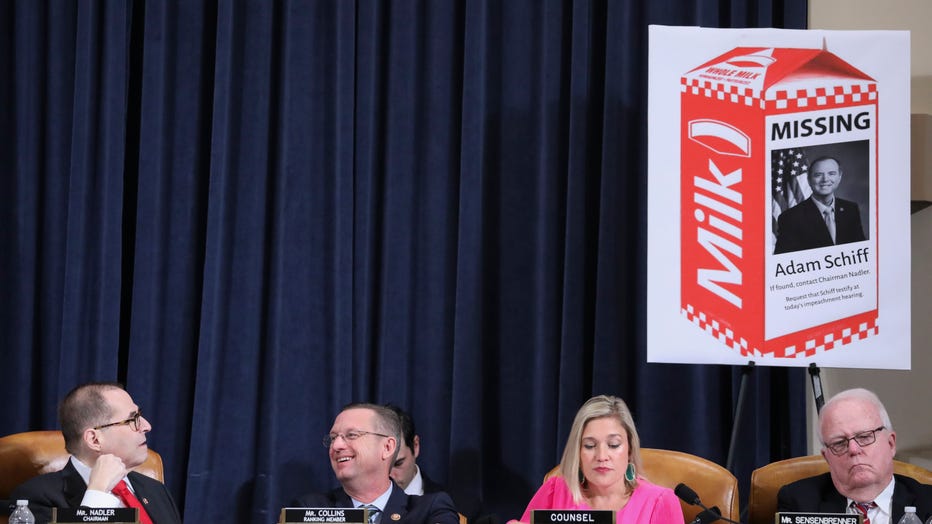 Collins accused Democrats of engaging in a “smear” campaign against lawmakers by disclosing phone records. But Goldman said investigators did not subpoena lawmaker accounts, instead they simply matched them up once they appeared in the records.

Trump's team was turning attention elsewhere, including Monday's release of a long-awaited Justice Department report into the 2016 Russia investigation. The watchdog report found that the FBI was justified in opening its investigation into ties between the Trump presidential campaign and Russia and that the FBI did not act with political bias, despite “serious performance failures” up the bureau’s chain of command.

Those findings undercut Trump’s claim that he was the target of a “witch hunt," rejecting theories and criticism spread by Trump and his supporters. Yet it found errors and misjudgments likely to be exploited by Republican allies as the president faces probable impeachment.

The White House was refusing in the impeachment process, and Rep. Collins asked to postpone Monday's hearing, criticizing Democrats for moving too swiftly.

One legal scholar testified last week that it would be the quickest impeachment in modern history.

Democrats say Trump abused his power in a July 25 phone call when he asked Ukrainian President Volodymyr Zelenskiy for a favor in investigating Democrats. They say it was bribery since Trump was withholding nearly $400 million in military aide that Ukraine depended on to counter Russian aggression.

Trump said over the weekend that his personal attorney Rudy Giuliani wants to take the information gathered from Giuliani's investigations and a recent trip to Ukraine to the U.S. attorney general and to Congress.

Trump and his aides have made clear that they now see his impeachment in the House as inevitable and have shifted their focus. A vote to convict requires a two-thirds vote of the Senate, where Republicans hold 53 of 100 seats. It is unlikely that Republican senators would cross party lines and vote to remove Trump from office.

As Democrats draft the articles, Pelosi's challenge will be to go broad enough to appease her liberal flank, which prefers a more robust accounting of Trump's actions reaching back to Mueller's findings. At the same time, centrist lawmakers prefer charges more tailored to Ukraine.

Nadler, in television interviews, declined to say ultimately how many articles of impeachment Democrats will present but said they will involve “certainly abuse of power” and likely “obstruction of Congress.”

He pointed to a “pattern” of conduct by Trump in seeking foreign interference in elections but would not commit to including the evidence of obstruction of justice in special counsel Robert Mueller’s Russia investigation as part of the articles of impeachment.