Steve Paulson says it's going to be extremely hot today with temps reaching 106 degrees in places like Livermore.

OAKLAND, Calif. - California’s power grid operator has extended the statewide flex alert to Friday from the hours of 6 p.m. to 9 p.m. They are urging residents to voluntarily conserve power on Thursday as well from 5 p.m. to 10 p.m.  as a heatwave grips the region.

The California Independent System Operator (CAISO) had issued Thursday's alert on Wednesday. Residents are asked to set their thermostats to 78 degrees or higher and avoid using washers, dishwashers, and other major appliances.

While the electrical supply was tight, CEO Elliot Mainzer said blackouts were unlikely. But he added that could change as temperatures spiked and urged people to heed the flex alert.

"Californians have stepped up many times before when asked to pitch in, and I’m confident they will do so," Mainzer said. 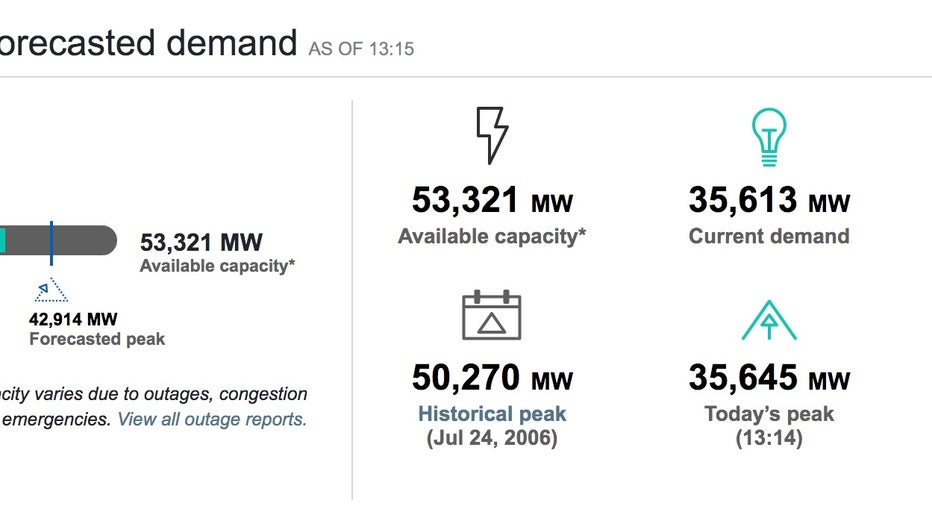 A screenshot of current and forecasted power demand as of 1:19 p.m.

The grid operator has an online tracker for residents to monitor real-time conditions. The tracker allows residents to see the current power demand, forecasted peak, and maximum capacity. If demands for more electricity outpaces supply, that could overload the grid. In most cases, to prevent that from occurring grid operators call for voluntary conservation before declaring an emergency.

As of 1:19 p.m. the grid tracker shows the system demand is at 65% and estimated to reach 80% capacity this evening.