President Donald Trump spoke at a coronavirus press briefing on Wednesday, an event that was revived this week following a three-month hiatus.

On Tuesday, Trump returned to the podium and warned that the novel coronavirus will get worse in the U.S. before it gets better. The pandemic has claimed more than 142,000 American lives in just five months.

“It will probably unfortunately get worse before it gets better,” Trump said from the White House Tuesday. But he also touted a reduction in deaths and progress on vaccines and treatments for COVID-19, which he referred to repeatedly as a the “China virus.” 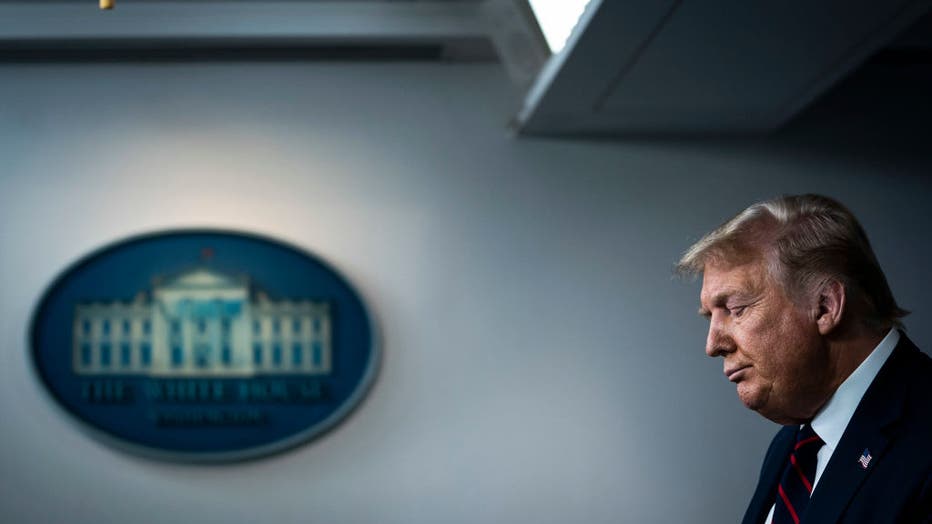 President Donald Trump speaks during a COVID-19 briefing in the James S. Brady Briefing Room at the White House on July 21, 2020 in Washington, D.C. (Photo by Jabin Botsford/The Washington Post via Getty Images)

Trump continued his recent encouragement of Americans to wear masks when social distancing is not possible, despite having seldom worn them in the past.

“Whether you like the mask or not, they have an impact," he said. "I’m getting used to the mask,” he added, pulling one out after months of suggesting that mask-wearing was a political statement against him.

The revived press briefings on the virus come a little more than three months before Election Day. For weeks, White House aides have pressed Trump to grow more disciplined in his public statements about the pandemic.

On Tuesday, Trump steered clear of what has been a favored talking point: that widespread testing for the virus in the U.S. “created” more cases, as aides noted that was false and projected a lack of responsibility.

“The vaccines are coming, and they're coming a lot sooner than anybody thought possible,” Trump said.

In total, more than 15 million people have contracted COVID-19 across the world, with nearly 4 million people in the U.S. alone, according to the July 22 data from the Johns Hopkins Coronavirus Resource Center.

RELATED: More than 15 million people have COVID-19 around the world, according to Johns Hopkins