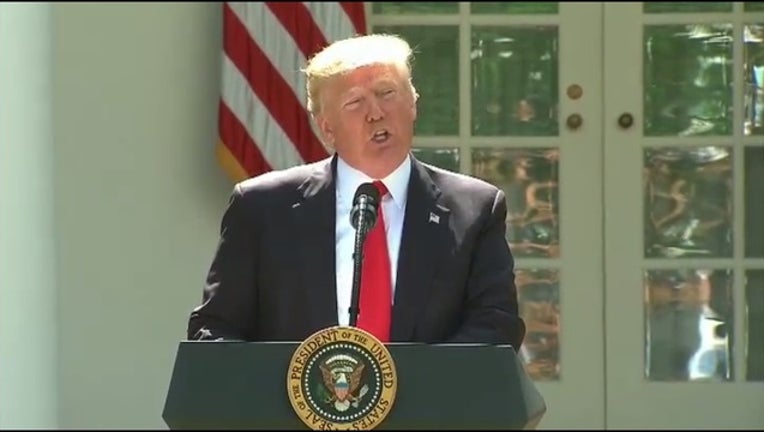 President Trump speaking about his decision to pull the U.S. from the Paris climate accord.

WASHINGTON (AP) -- President Donald Trump lashed out Thursday at the investigators driving the Russia investigation as "very bad and conflicted people," responding angrily to reports that the special counsel is looking into whether Trump obstructed justice.

In a series of statements on Twitter, Trump called special counsel Robert Mueller's investigation into Russian interference in the 2016 campaign a "WITCH HUNT" based on the "phony" premise of possible collusion between Russia and a cadre of Trump campaign associates.

The president complained the probe is unfair and wondered why his defeated Democratic opponent wasn't getting the same scrutiny.

"Why is that Hillary Clintons family and Dems dealings with Russia are not looked at, but my non-dealings are?" he asked.

"They made up a phony collusion with the Russians story, found zero proof, so now they go for obstruction of justice on the phony story. Nice," Trump wrote in his first tweet. "You are witnessing the single greatest WITCH HUNT in American political history - led by some very bad and conflicted people! (hash)MAGA."

The Twitter attacks came as Vice President Mike Pence hired a personal lawyer to represent him in the intensifying investigation. Pence's office confirmed he had retained Richard Cullen, a former Virginia attorney general and U.S. attorney for the Eastern District of Virginia, to assist "in responding to inquiries" from Mueller.

Comey testified last week that he also felt pressured to drop the Flynn probe. Comey said he believes Trump ultimately fired him "because of the Russia investigation."

Coats met behind closed doors for more than three hours Thursday with the Senate intelligence committee, which is conducting a separate investigation into Russian interference in the 2016 election.

Trump's Twitter response followed days of intensifying criticism of Mueller from some conservatives, who have charged the former FBI director and his team with political bias and have claimed his relationship to Comey and an earlier meeting with Trump amount to conflicts of interest.

A close Trump associate said this week the president was considering firing Mueller, although the White House later denied it.