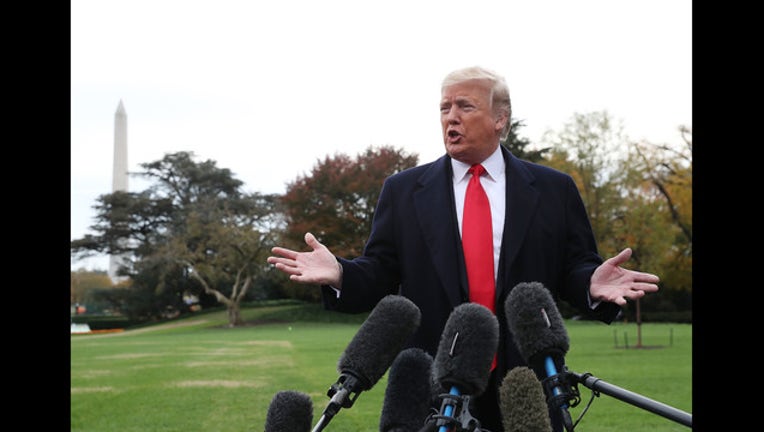 U.S. President Donald Trump speaks to the media before departing on Marine One at the White House on November 2, 2018 in Washington, DC. (Photo by Mark Wilson/Getty Images)

President Donald Trump says he plans to sign an order next week that could lead to the large-scale detention of migrants crossing the southern border and bar anyone caught crossing illegally from claiming asylum - two legally dubious proposals that mark his latest election season barrage against illegal immigration.

Trump also said he had told the U.S. military mobilizing at the southwest border that if U.S. troops face rock-throwing migrants, they should react as though the rocks were "rifles."

"This is an invasion," Trump declared, as he has previously on a subject that has been shown to resonate strongly with his base of Republican supporters. He made his comments Thursday at the White House in a rambling, campaign-style speech that was billed as a response to caravans of migrants traveling slowly by foot toward the U.S. border. But Trump offered few details on how exactly he planned to overhaul an asylum system he claimed was plagued by "endemic abuse" that he said "makes a mockery of our immigration system."

U.S. immigration laws make clear that migrants seeking asylum may do so either at or between border crossings. But Trump said he would limit that to official crossing points. The U.S. also doesn't have space at the border to manage the large-scale detention of migrants, with most facilities at capacity. Trump said the government would erect "massive tents" instead.

His announcement marked Trump's latest attempt to keep the issue of immigration front-and-center in the final stretch before next Tuesday's elections . Trump has spent the waning days of the campaign hammering the issue at every occasion as he tries to energize Republican voters using the same playbook that helped him win in 2016. In addition to deploying the military to the southern border to stave off the caravan, Trump announced plans to try to end the constitutionally-protected right of birthright citizenship for all children born in the U.S.

He brought up immigration issues several times during a political rally Thursday night in Columbia, Missouri. He railed against "birth tourism," where mothers from abroad travel to America to have babies so they will automatically be U.S. citizens. And he denounced "chain migration," where these new citizens then bring in their extended families into the country.

"You come into the country - you're like two months old ... and you're gonna bring 'em all - your aunts and uncles and grandfathers and lots of people," he said.

The president announced Wednesday that he was considering deploying up to 15,000 troops to the U.S.-Mexican border in response to the caravans - roughly double the number the Pentagon said it currently plans for a mission that has been criticized as unnecessary, considering the caravans remain hundreds of miles away.

Trump said Thursday he was "not going to put up with" any sort of violence directed at those U.S. forces, warning the military would fight back. "When they throw rocks like they did at the Mexico military and police, I say consider it a rifle," he said.

The exact rules for the use of force by military police and other soldiers who will be operating near the border have not been disclosed, but in all cases troops have the right of self-defense.

Still, Mark Hertling, a retired Army general, wrote on Twitter after Trump's speech that no military officer would allow a soldier to shoot an individual throwing a rock. "It would be an unlawful order," he wrote, citing the Law of Land Warfare.

Trump said Thursday that, under his order, any migrants who do enter the country would be housed in "massive tent cities" he plans to build while their cases are processed.

"We're going to catch, we're not going to release," he said.

Under current protocol, many asylum seekers are released while their cases make their way through backlogged courts - a process that can take years.

Critics said the speech seemed mostly designed to scare, with no specifics on what mechanisms Trump intended to use to push through his desired changes. Administration officials have told The Associated Press that Trump intends to invoke the same authority he used to push through his travel ban, but it's not clear if that's what he was doing with Thursday's speech.

"He's really trying to scare the American public into thinking these are thousands of dangerous thugs," said Greg Chen, of the American Immigration Lawyers Association. "It's a classic strategy that goes back to 19th century nativist thinking."

Trump and other administration officials have long said those seeking asylum should come through legal ports of entry. But many migrants are unaware of that guidance, and official border crossings have grown increasingly clogged. Immigration officials have turned away asylum-seekers at border crossings because of overcrowding, telling them to return at a later date. Backlogs have become especially bad in recent months at crossings in California, Arizona and Texas, with people generally waiting five weeks to try to claim asylum at San Diego's main crossing and sleeping out in the open for days at a time.

Migrants who cross illegally are generally arrested and often seek asylum or some other form of protection. Claims have spiked in recent years, and there is currently a backlog of more than 800,000 cases pending in immigration court. Administration officials have railed against what they say are loopholes designed to encourage people, especially from Central America, to come to the U.S. and claim asylum. Generally, only about 20 percent of applicants are approved.

The U.S. fielded more than 330,000 asylum claims in 2017, nearly double the number two years earlier and surpassing Germany as highest in the world.

But it remains unclear how many people currently en route to the U.S. will even make it to the border.

There are currently four caravans. The main group of about 4,000 migrants - down from its estimated peak of more than 7,000 - remains in southern Mexico, hundreds of miles from the border. A second, smaller group of 1,000 or so is more than 200 miles behind the first. A third band of about 500 from El Salvador has made it to Guatemala, and a fourth group of about 700 set out from the Salvadoran capital Wednesday.

Similar caravans have gathered regularly over the years and have generally dwindled by the time they reach the southern border. And most have passed largely unnoticed.

Trump has nonetheless mounted an enormous show of force in response to their movement - coinciding with elections that will determine which party controls Congress.

The first 100 active duty troops arrived at the border in McAllen, Texas, on Thursday - part of the "more than 7,000" troops the Pentagon said were being sent to support Customs and Border Protection agents.

"These illegal caravans will not be allowed into the United States and they should turn back now because they're wasting their time," Trump said Thursday.

Notably, he said his executive order would come next week, which means it could be after Election Day.

Trump has rejected the idea he has been "fearmongering" and using the issue for political purposes, but on Thursday he blamed Democrats for the "incompetent, very, very stupid laws that we have." He noted at one point, "Women want security."

Trump also tweeted a video Wednesday alleging, without evidence, that Democrats were responsible for allowing a homicidal immigrant into the U.S. The video was reminiscent of the infamous "Willie Horton" ad used against Democratic presidential candidate Michael Dukakis in 1988 and condemned as racist.