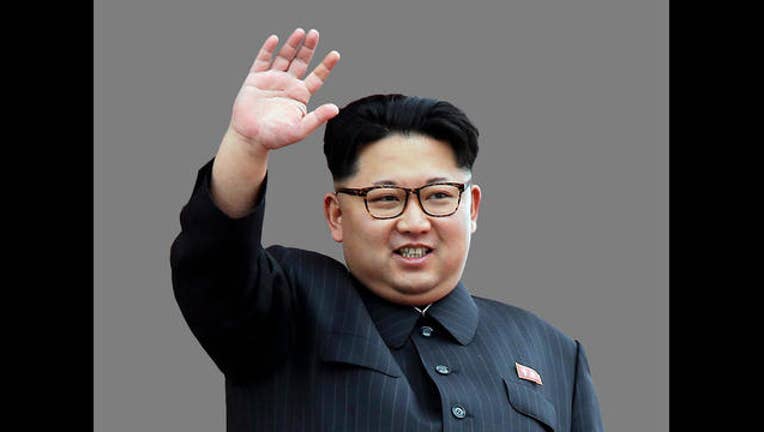 Trump, in Washington, and Pence at the tense Demilitarized Zone between North and South Korea, signaled a forceful U.S. stance on North Korea's recent actions and threats. But no one was predicting what might come next.

Behind the heated rhetoric, in fact, Trump's strategy in the region looks somewhat similar to predecessor Barack Obama's -- albeit with the added unpredictability of a new president who has shown he's willing to use force.

Pence, inspecting the DMZ, warned Pyongyang that after years of testing the U.S. and South Korea with its nuclear ambitions, "the era of strategic patience is over." Appearing later with South Korea's acting president, Hwang Kyo-ahn, the vice president pointed to Trump's recent military actions in Syria and Afghanistan as signs that the new administration would not shrink from acting against the North.

"North Korea would do well not to test his resolve -- or the strength of the armed forces of the United States in this region," Pence said at the start of a 10-day trip to Asia.

Pence's remarks also came with hope for a diplomatic path. Washington, he said, was looking for security "through peaceable means, through negotiations." Trump said the same at the White House.

In the meantime, North Korea's deputy U.N. ambassador accused the United States of turning the Korean peninsula into "the world's biggest hotspot" and creating "a dangerous situation in which a thermonuclear war may break out at any moment."

Kim In Ryong told a news conference Monday that U.S.-South Korean military exercises being staged now are the largest-ever "aggressive war drill." He said North Korea's measures to bolster its nuclear forces are self-defensive "to cope with the U.S. vicious nuclear threat and blackmail," and he said his country "is ready to react to any mode of war desired by the U.S."

America's implied threat of force isn't new, nor is hope for engagement. Previous presidents have repeatedly left all options on the table while trying to enlist China's help to pressure North Korea to pursue diplomatic solutions. The Trump administration has labeled this policy "maximum pressure and engagement," although officials acknowledge there is no current engagement with Pyongyang.

Until recently, it has been Trump's confrontational tone that has drawn attention rather than his action. But then he ordered the unilateral missile strike against Syria, even after dismissing talk of deeper U.S. involvement in that nation's civil war.

"There is both greater unpredictability and decisiveness from President Trump," said Victor Cha, the director of Asian Studies at Georgetown University and a former adviser to President George W. Bush. Cha noted Pence's reference to "strategic patience," an Obama administration strategy in which diplomatic and economic pressure from sanctions were given time to change the North's behavior.

The White House did not offer a sense of when Trump's patience might run out.

"I don't think that you're going to see the president drawing red lines in the sand, but I think that the action that he took in Syria shows that, when appropriate, this president will take decisive action," White House spokesman Sean Spicer said.

North Korea's latest missile test fizzled over the weekend, but its weapons development has appeared to make steady progress in recent years. The North conducted two nuclear test explosions and 24 ballistic missile tests in 2016, and experts predict it could have a nuclear-tipped missile capable of reaching the U.S. mainland within a few years.

Pence said after meeting with South Korea's acting president that the U.S. and its allies have attempted to "peacefully dismantle North Korea's nuclear program" for more than two decades. "But at every step of the way, North Korea answered our overtures with willful deception, broken promises and nuclear and missile tests."

Former President Obama, too, tried to persuade China to use its influence over Pyongyang.

It remains unclear the extent to which China might step up. Trump and his advisers have pointed to Beijing's move to restrict coal imports from North Korea as a sign Beijing is listening, and the U.S. says China has turned back some shipments in recent days. But some of those restrictions merely put in place U.N. sanctions passed last year with China's support -- before Trump took office.

In a phone call with reporters Monday, Susan Thornton, the acting assistant secretary of state for East Asia and Pacific Affairs, said the president has "made clear to the Chinese that they should view North Korea as a liability, not as an asset, and that this is an urgent global threat that must be addressed by all peace-loving nations, but especially by China, when they have so much leverage."

"We've seen some tangible indications that they're working toward this end, but it's still quite early," she said.

Trump himself appeared to reinforce the stern U.S. message at the White House, replying "Gotta behave" when a CNN reporter asked what message he had for North Korean leader Kim Jong Un.

China also made a plea for a return to negotiations, with Foreign Ministry spokesman Lu Kang saying Beijing wants to resume the talks that ended in stalemate in 2009. He suggested that U.S. plans to deploy a missile defense system in South Korea were damaging its relations with China.