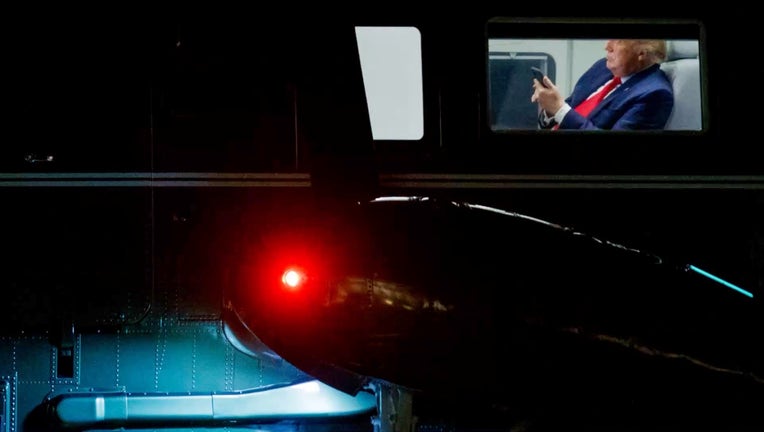 US President Donald J. Trump looks at his phone as Marine One lands on the South Lawn of the White House in Washington, DC, USA, 10 July 2020. This evening the White House issued a press release stating that President Trump commuted the sentence of R

WASHINGTON - Community leaders around the country are redoubling efforts to ensure the 2020 census includes marginalized communities in the wake of President Donald Trump's latest effort to skew the count.

The U.S. Constitution requires the federal government to count every person living in the country every 10 years, regardless of immigration or citizenship status.

In 2018, the Trump administration sought to place a citizenship question on the census questionnaire but was rebuffed by the U.S. Supreme Court in June.

Critics argued that the citizenship question, if added, would either help the administration to better enact its anti-immigration policies or would discourage immigrants, whether documented or not, from filling out the form, thereby reducing the electoral power of Democrats.

On Tuesday, Trump took another tack by directing the U.S. Department of Commerce to remove undocumented immigrants from the national population count during the reapportionment process, which determines how many congressional representatives each state sends to Washington, D.C.

"This amounts to nothing more than cooking the numbers, making up an entire new data set on which to base the most important element of our democracy, and that's the reapportionment of representation in the House of Representatives," said Arturo Vargas, executive director of the National Association of Latino Elected Officials.

"What I believe is also an assault on the American sensibility is that the president pretends to be able to amend the constitution by memo," Vargas said Friday during a national videoconference call organized by Ethnic Media Services. "Nothing could be more offensive if it weren't so ridiculous."

Since the census doesn't collect data on the number of undocumented residents living in the United States, it's unclear how the administration would subtract those residents during reapportionment, but the consequence of such a move could be significant. or example, states with large immigrant populations like California and Texas could lose up to three congressional representatives, while others might not gain the seats they expected based on population growth over the past decade, said John Yang, president and executive director of Asian Americans Advancing Justice.

"Clearly this presidential memo is unconstitutional," Yang said. "It seeks to shift political representation away from places with large numbers of undocumented residents."

"It's about cooking the books after the fact," he said.

The president's latest stab at interfering with the collection or use of census data, while already the subject of a lawsuit by Common Cause and a group of several state and local governments, is making things more difficult for organizations trying to ensure a complete count.

Many groups working on census awareness campaigns have reported that despite Trump's court loss on the citizenship question, immigrant populations remain wary of the count -- and his newest move seems to have reinforced that attitude.

"We have been facing an uphill battle unfortunately in the last two months," said Nestor Lopez, a census organizer in Hidalgo County, Texas.

"COVID-19 has really thrown a wrench into our operations," Lopez said. "This week, with the announcement of the administration's actions, this is another hurdle we have to overcome."

"If it stands or not, it will be very, very damaging to our region and the future of our region," he said. "Our challenges are shared by other boarder communities, as well."

In order to counter Trump's latest move, Hidalgo County joined forces with San Francisco City Attorney Denis Herrera and more than 30 other states, cities and counties in filing a lawsuit in federal court on Friday.

"This effort by the Trump Administration is the latest pernicious attempt to make undocumented people civically invisible. This administration has tried to undermine the census before -- and lost that case to our coalition. After losing in court, the president is now trying a new way to undermine our Constitution," Herrera said in a news release.

In addition, census advocates are working hard to encourage people to participate and to remind them that census data is used not just for congressional reapportionment but also for the distribution of hundreds of billions of dollars annually from the federal government.

The money is provided to state and local governments for things like education, health care and food and housing programs, among other things, and is based on the population data collected during the census.

The census self-response period - during which people are encouraged to fill out the paper census questionnaire or complete the form online or over the phone - was originally scheduled to end on July 31 but has been extended to October 31 due to the pandemic.

Also, the in-person follow up for households that don't complete the form during the self-response period was to run from May 13 to July 31 but has now been rescheduled for Aug. 11 to Oct. 31.