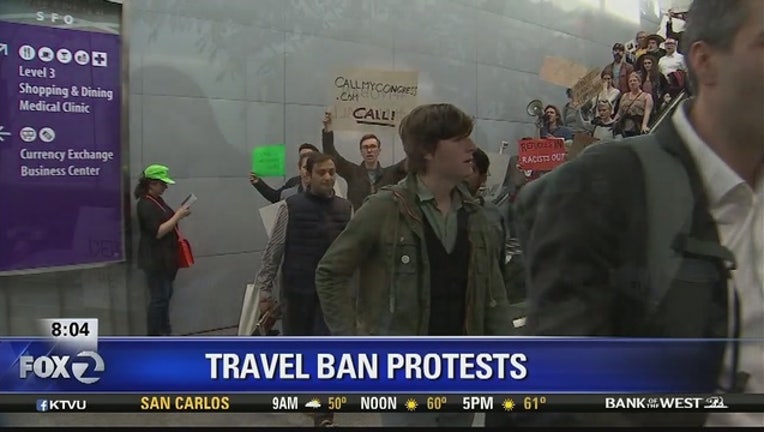 BERKELEY & STANFORD, Calif. (BCN) - A student at the University of California at Berkeley, another at Stanford University and one at a San Diego college filed suit Thursday challenging President Donald Trump's executive order banning travel from seven majority Muslim countries.

The executive order is directed at citizens of seven predominantly Muslim countries, which are Yemen, Iran, Irag, Somalia, Sudan, Syria and Libya.

Al-Mowafak is a freshman at Stanford who is married to a Yemeni man without a U.S. Visa. The only way she can visit him is if she visits Yemen and the executive order prevents that.

The UC Berkeley student has accepted a job with a firm in Silicon Valley and fears losing the opportunity to graduate and losing the job, according to court documents.

Ghaleb is now stuck in outside of the U.S. because of the executive order. He traveled on Jan. 15 to Saudi Arabia to visit family and planned to return two weeks later to start the spring semester.

The suit, which was filed on behalf of the students by the American Civil Liberties Union of Northern California, also seeks class action status.

The class action status seeks to stop the executive order from being enforced against the plaintiffs who include the three students and other citizens of the seven countries affected by the president's executive order.

The suit also describes the plaintiffs as those "who currently are, or recently have been, lawfully present in California and who, but for the January 27, 2017, Executive Order" could travel to the U.S. or leave and return.

"The federal government has made it clear that it intends to favor Christian immigrants over Muslims in making decisions about who to detain, interrogate, deport, or entirely refuse entry," Julia Mass, senior staff attorney with the ACLU of Northern California, said in a statement.

"We are a diverse society. American Muslims, immigrants and U.S.-born alike, are part of the fabric of this nation."

Jewish Family & Community Services East Bay is also listed as a plaintiff because it seeks to resettle and provide services to refugees. The executive order also suspends the U.S. refugee program for 120 days and bans refugees from Syria indefinitely.

A spokesperson for the U.S. Department of State, which is listed as a defendant in the suit, did not immediately respond to a request for a comment.